The meaning of the word ‘brunch’ seems to have shifted somewhat in the last couple of years, or at least it has in London. Where once it described a late morning meal that fused together breakfast and lunch, it seems increasingly to be used for any weekend lunch menu, even if the restaurant serving it doesn’t open until noon. And there are no dishes on the menu that might reasonably be associated with the first meal of the day…

Still, that’s a matter of semantics and marketing. Whereas I’m far more interested in the delicious food and cocktails that form Chotto Matte’s newly launched Brunch Menu, which we ate and drank our way through a couple of weekends back. 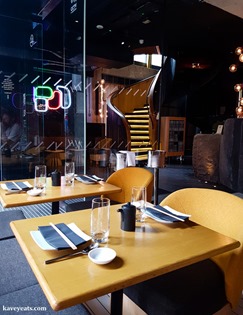 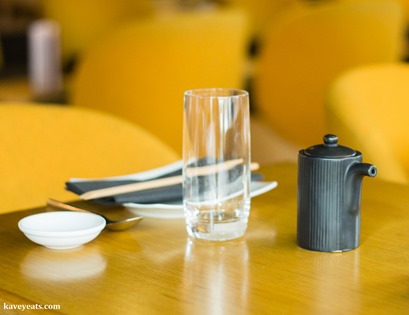 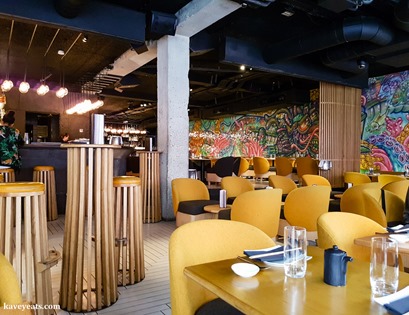 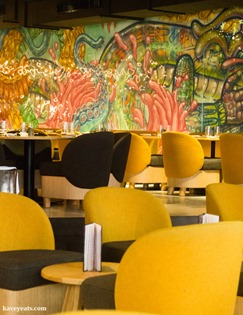 Surprisingly, this was our first visit to Chotto Matte – it’s been my intention to visit since it opened nearly four years ago; I really must get better at maintaining a Restaurant Wish List rather than relying on my rather inadequate memory.

I rather liked the colourful interior full of bright yellow seating (my favourite colour) and a bright and shiny mural along the far wall. It’s an upliftingly vibrant space, and reasonably comfortable too – though be aware that tables and chairs are super low and Pete squeezed in looking for the world like an adult trying to sit at a primary school desk. 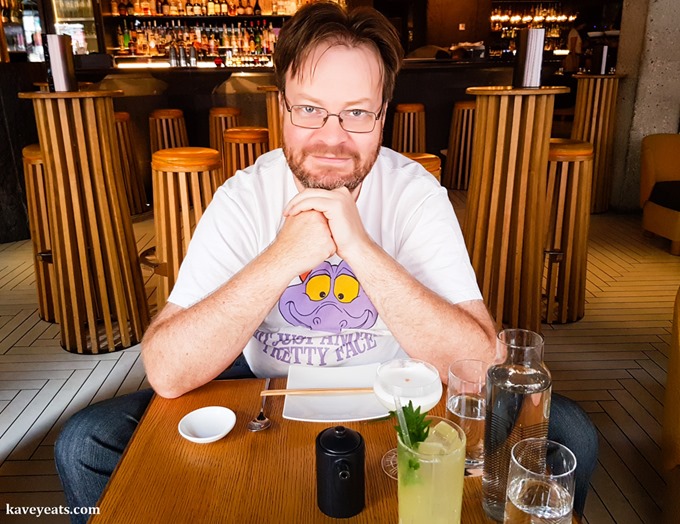 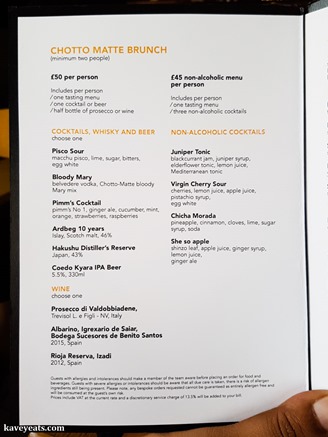 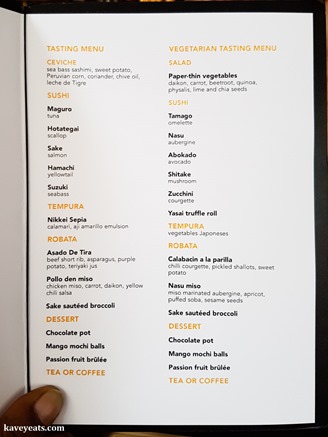 Those drinking alcohol pay the extra £5 to choose one drink from the Cocktails, Whisky and Beer section, followed by half a bottle of prosecco, or red or white wine. The non-alcoholic option gives you your choice of three drinks from the Non-Alcoholic Cocktails list. 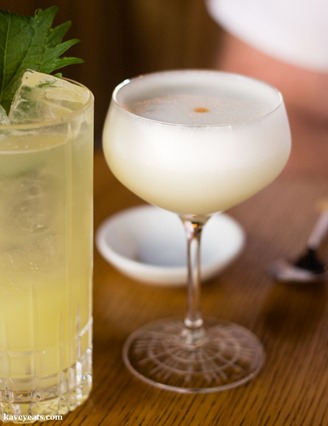 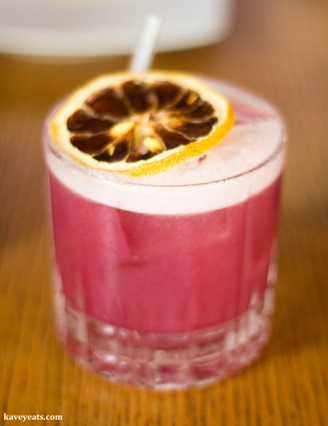 Pete certainly enjoyed his classic Pisco Sour followed by a half bottle of Rioja red wine.

I loved the descriptions of the non-alcoholic cocktails more than the reality, since the dominant flavour in two out of three that I tried was lemon juice; the anticipated flavours of cherries, apple and pistachio in the Virgin Cherry Sour were completely indistinguishable, as were the blackcurrant and elderflower in the Juniper Tonic. The She So Apple was the best of the three with a pleasing apple and ginger taste. I did ask for them to made with vastly reduced lemon juice and a little more sugar syrup but this met with no success.

If you like your cocktails heavy on the lemoniness though, you’ll enjoy these much more – and certainly I appreciated the intention of providing a more create menu for non-alcoholic drinkers than is usually offered, if not the execution. 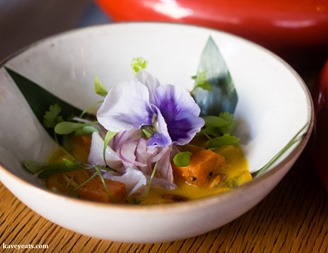 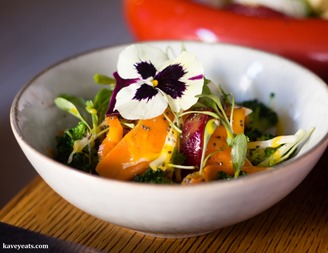 On the food front though, it was all smiles, murmurs of delight and sighs of appreciation throughout the meal.

We asked for one regular tasting menu and one vegetarian, to share, so we could try a wider variety and see how the two compared.

The veggie menu starts with a salad of Paper-thin vegetables including daikon, carrot, beetroot, quinoa, physalis, lime and chia seeds. The vegetables are crunchy, colourful and generously dressed in a zingy sauce that we quickly realised was very similar to that used for the ceviche. This was a really vibrant start – both visually and on the palate.

The Ceviche included sea bass sashimi, sweet potato, Peruvian corn, coriander, chive oil and leche de tigre (tiger’s milk, the colloquial name for ceviche marinade). It was good, though I wasn’t convinced by the texture of the cubes of sweet potato against the slippery soft fish, not the extremely starchy and somewhat flavourless giant corn kernels. 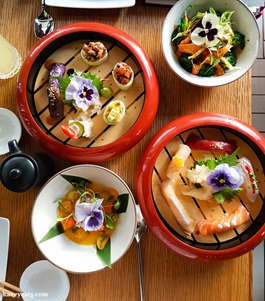 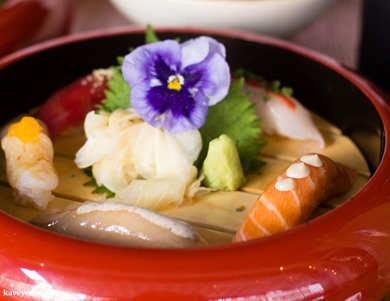 Served at the same time as the ceviche and salad, the Sushi course was stunningly presented in bright red plastic bowls with a slatted wooden (or was it bamboo?) base on which the sushi was artfully displayed.

The seafood sushi platter included five pieces – Maguro (tuna), Hotategai (scallop), Sake (salmon), Hamachi (yellowtail) and Suzuki (seabass), each one utterly perfect. The rice was not fridge cold but rather a pleasant room-temperature as it should be, with a balanced flavour that pleasingly complemented the fish. And each piece of fish was garnished or dressed with sauce or herbs that helped to bring out and enhance its own flavour. 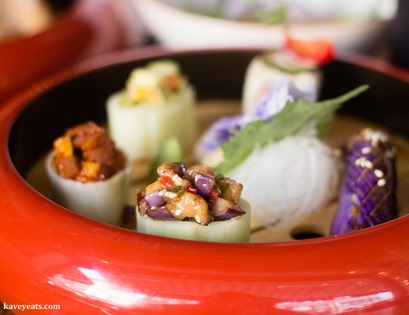 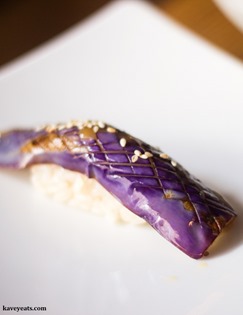 If we hadn’t already been confident (we were), this was the course that made it clear that the vegetable tasting menu was as impressive as the standard menu, with each individual piece of sushi a miniature piece of art.

The six pieces were Tamago (omelette), Nasu (aubergine), Abokado (avocado), Shitake (mushroom), Zucchini (courgette) and Yasai truffle roll. Just look at the colour of that aubergine, ad the detail within each piece. 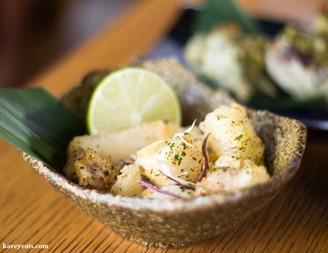 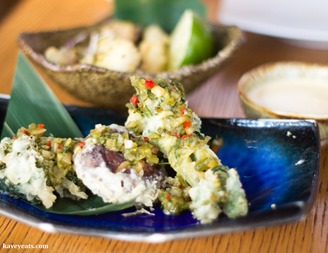 Next came the Tempura course, Nikkei Sepia (calamari and an aji amarillo mayonnaise) and Vegetables Japoneses. Both were perfect examples of tempura – the barely-there batter light and crisp and perfectly grease-free, and the contents within cooked just right for each ingredient.

The vegetable tempura was served with a (delicious) pickled salsa which was served spooned over the tempura – for me this was a misstep as it quickly caused the tempura to become soggy where it seeped in; much better to have served it condiment style, as they did for the aji dip. 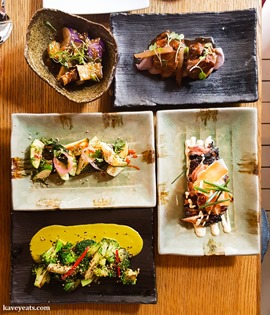 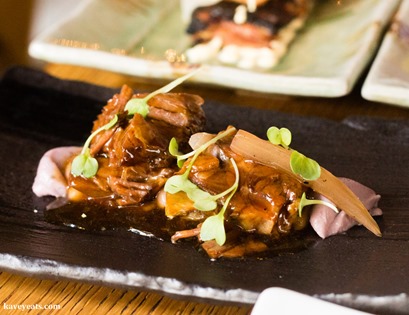 When the Robata dishes – what I’d label the Mains – came out we were a little overwhelmed; so much food, and it all looked so delicious! I don’t think it was my imagination that diners at tables to each side of us looked on a little enviously at our feast, compared to the three (double portion) dishes they were served!

From the non-veggie menu, Asado De Tira, described in the menu as ‘beef short ribs with asparagus, purple potato and teriyaki jus’. What arrived were two generous chunks of beef braised until they were fork-apart tender, served on a bed of purple mashed potato and drenched in delicious teriyaki. Wonderful! 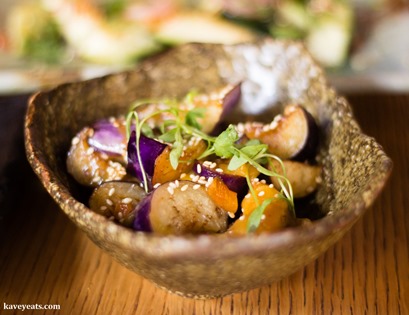 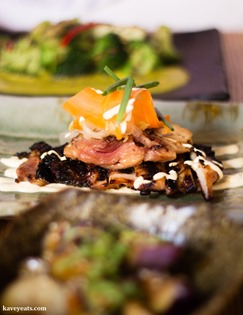 Both menus had a miso dish, and at first glance I assumed the meat one might be the more interesting. Pollo den miso turned out to be beautifully charred skin-on pieces of chicken marinaded in miso served with carrot, daikon and a yellow chilli salsa. Very good indeed – that smokiness from the grill worked perfectly with the umami miso.

Nasu miso was one of my star dishes – the same brightly purple-skinned aubergine in a well-balanced miso marinade but lifted so far beyond the usual nasu dengaku by the addition of little cubes of soft apricot as well as puffed soba and sesame seeds. 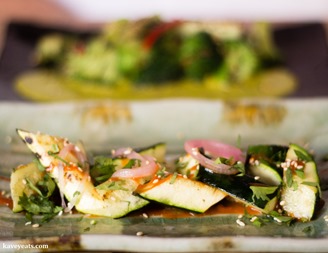 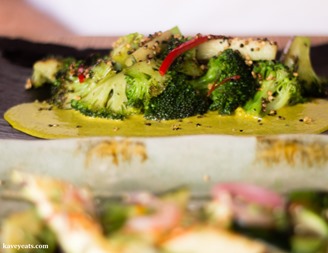 The veggie dish in place of the beef short rib was Calabacin a la parilla – ‘chilli courgette, pickled shallots, sweet potato’. On first glance, I thought it a poor substitute for that beautifully rich and meaty dish, but actually, the courgette was so fresh it had a natural sweetness, and was cooked to retain some crunch without being too raw. The flavours were again very good and we really liked it, though I’d still say the beef short ribs edged it by a margin!

Both menus also came with a serving of Sake sautéed broccoli. The veg itself was delicious but for me the puddle yellow-lime sauce it was plated on was far too lemony sharp and sour, and I could only eat those pieces that had managed to stay clear of the sauce. 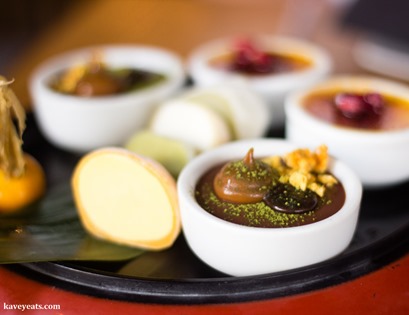 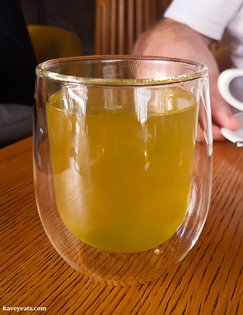 By the time desserts were served, we were pretty full and very grateful for the cute little individual portions provided. Chocolate pots were dark, rich, intense and garnished with chocolate sauces and honeycomb. Passion fruit brûlée had a nicely textured custard, the flavour of the fruit worked very well and the brûlée topping was lovely and crunchy. And the Mango mochi balls (which I think may be Little Moons) were gorgeous – smooth and delicious ice cream with the perfect chewy mochi coat – though you may be able to see that only one half was actually mango, served with a half of yuzu and two halves of matcha. All good. After all that, tea and coffee was also included (though I wish they’d had more than one Japanese tea to choose from).

It was a wonderful lunch, just the kind of indulgent affair that is perfect for a leisurely weekend feast, and we are now keener than ever to go back and try the rest of Chotto Matte’s menu. I consider it great value too, especially when you consider the drinks included, and the high quality ingredients that go into the extensive selection of dishes.

Please leave a comment - I love hearing from you!29 Comments to "Weekend Brunch Menu at Chotto Matte, Soho"