Last week I was invited to a blogger dinner at Gatti’s, an Italian restaurant that’s recently moved to a new City Point location close to Moorgate station. The restaurant, which opened in Broadgate in 1989, is believed to have been named in honour of Luigi Gatti, a successful London front of house restaurant manager who was appointed by White Star Lines to run their exclusive Ritz Restaurant for first class passengers of the Titanic. Only 3 of nearly 70 staff working for the restaurant survived the sinking of the great ship. 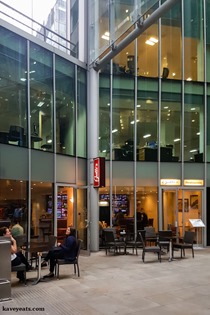 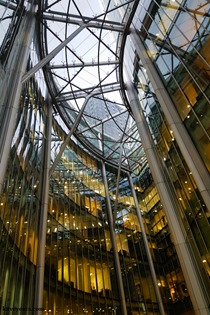 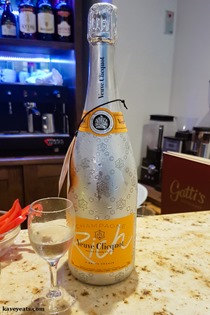 Owner Jenny Carpenter took over the restaurant in 2013 but learned shortly afterwards that the building was earmarked for destruction. So she decided to move the restaurant to a new location just half a kilometer away, that move being completed earlier this year. In honour of the move, she has launched new and old set menus, one to celebrate the traditional classic dishes and the other to showcase more contemporary twists on Italian cuisine.

The restaurant has a partnership with Veuve Cliquot which features on both menus so we started the evening with a tasting of the famous champagne house’s new Veuve Cliquot Rich, a sweeter offering developed for use in cocktails. Most of my dining companions found it too sweet on its own but enjoyed it in cocktails. With my sweet tooth, I preferred it plain. That said I’d not pay the high price point for it myself. 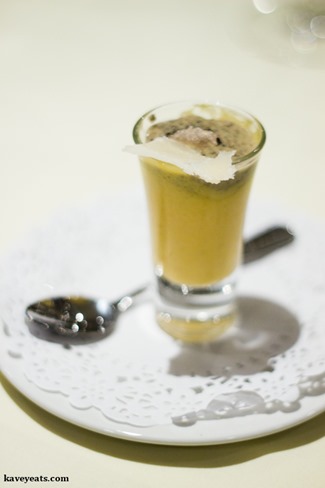 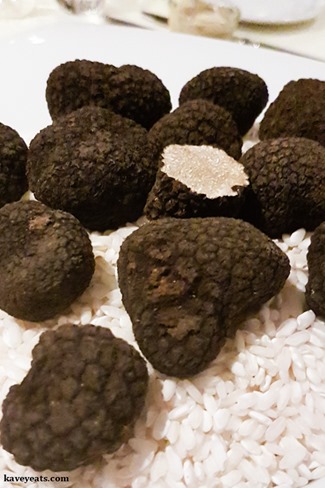 An amuse bouche of parmesan sabayon with black truffle and a parmesan shaving was a deliciously rich start to our meal and I appreciated having the fresh truffles shown to the table as we ate. 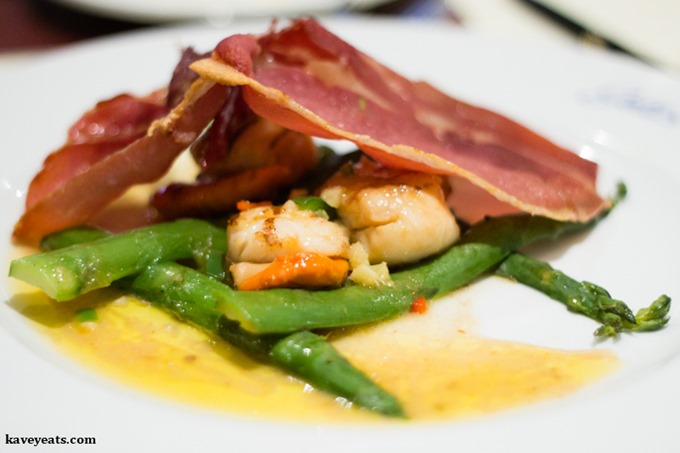 My friend and I split two starters so we didn’t have to choose between them. Grilled scallops, asparagus, ginger, garlic and fresh chilli dressing with crispy Parma ham was a large plate of three generously-sized fat scallops with the coral still attached – this makes me happy as it’s so rarely served and so full of flavour. The asparagus was a touch overcooked for me, very soft with no vegetable bite remaining. The dressing was delicious though the ginger rather subtle, and no sign of the chilli whatsoever; I don’t think that’s a bad thing, it worked well as it was. 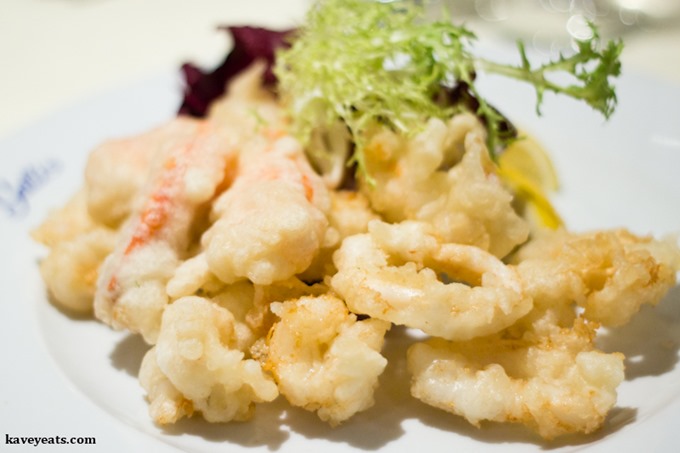 Tempura di Mare was enormous for a starter, a dinner plate piled high with battered prawns, scampi and calamari. Served with a tartar sauce, I’m not sure why this was labelled tempura rather than fritto but it was a good dish, either way. My only complaint here was the inclusion of unshelled butterflied king prawns, the shells far too thick to be edible and quite a pain to extract from the batter and shell. 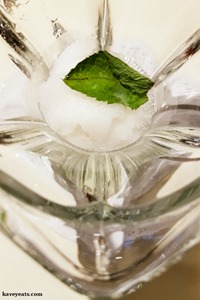 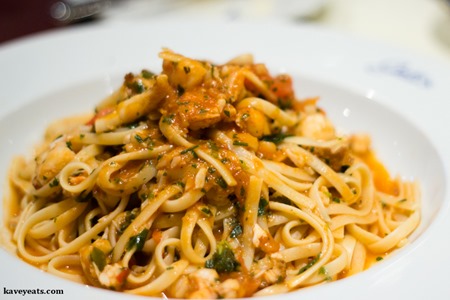 A palate cleanser of lemon and prosseco sorbet was superb, well balanced between sweet and sharp, and a good antidote to the buttery dressing on the scallops and the tempura batter.

Linguine All’ Aragosta (linguine with lobster and fresh tomatoes) proved true to the pattern, an enormous serving – more pasta than we cook for two of us at home. Once again, a generous amount of lobster meat made this very classic dish feel rather decadent .

Other mains on the table included ravioli of confit duck leg and porcini mushrooms with grated foie gras – this was not a success with clumsily thick pasta and a dense and dry filling dominated by the porcini rather than the duck. Scottata di Tonno, a large fried tuna steak with sesame seeds and pistachio pesto looked wonderful, and perfectly cooked tuna too. The Scottish beef fillet was also cooked beautifully and the port wine reduction looked right up my street, though the person who ordered it found it a touch sweet. 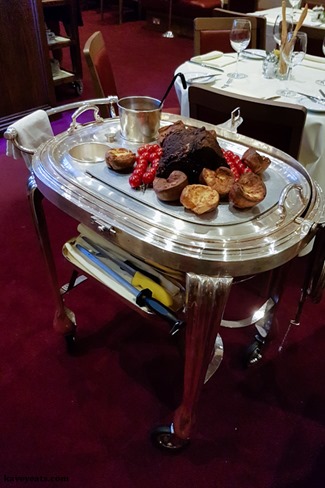 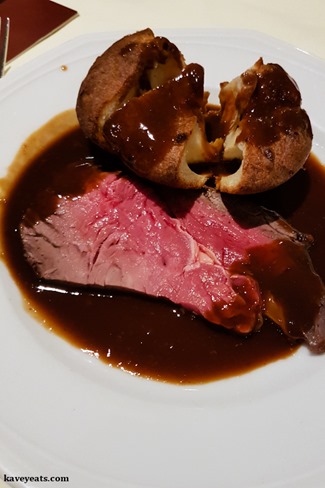 One of the things I really loved seeing was the Gatti’s old-fashioned meat trolley – with a different roast served every day, this is fabulously retro! We tried small tasters of the day’s roast beef and it was superb, very good flavour and cooked perfectly rare with an outrageously beefy gravy generously poured over the plate. However, my Yorkshire pudding was really overcooked; burnt rather than pleasantly browned. I left it uneaten. 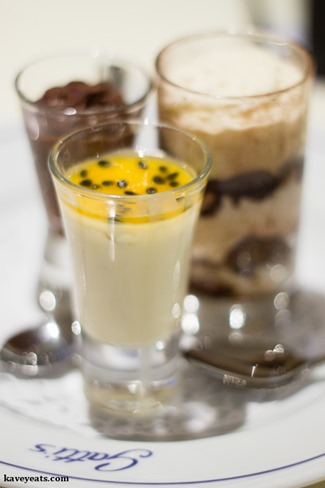 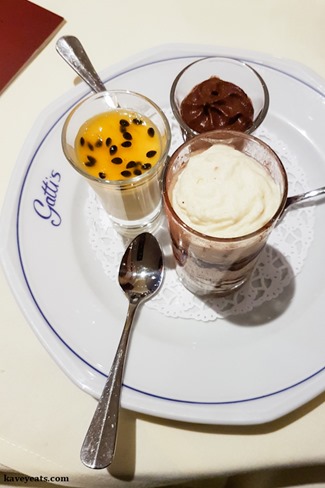 We were given a taster of three desserts, though if I go again I’ll choose from the desserts trolley – a wonderful throwback to a bygone era. The passion fruit panna cotta was OK, a little too much gelatin gave it a hard and bouncy set rather than the lovely light wobble of a good example. Chocolate mousse was a disaster, the pleasant chocolate orange flavour altogether cancelled out by a very grainy texture – perhaps the chocolate seized or the eggs cooked and curdled – whatever caused it, it’s a shame the kitchen didn’t notice and make a fresh batch. Best of the three was the tiramisu, light, full of flavour and a satisfying finish.

Overall, Gatti’s is a mixed bag. Some superb dishes, made with good quality ingredients, cooked well and full of flavour. Others that missed the mark and let the side down. A generosity of spirit in the portions, including the more expensive ingredients such as truffle and lobster, certainly make for a feeling of goodwill and hospitality; this is echoed by enthusiastic kitchen and front of house teams. Value is very good, with both set menus priced at just £34.99 for three courses plus a glass of Veuve Cliquot champagne. This would be a fun place to come with a group, especially for fussy eaters – I think Italian is one of those cuisines that nearly everyone enjoys.

Kavey Eats dined as a guest of Gatti’s restaurant.

Please leave a comment - I love hearing from you!13 Comments to "Gatti’s Italian Restaurant | City Point"