“Seek out some retired and old-world spot, far from the madding crowd, and dream away a sunny week among its drowsy lanes – some half-forgotten nook, hidden away by the fairies, out of reach of the noisy world – some quaint-perched eyrie on the cliffs of Time, from whence the surging waves of the nineteenth century would sound far-off and faint.” ~ Jerome K. Jerome

If this were true when writer Jerome K Jerome published ‘Three Men in a Boat (To Say Nothing of the Dog)‘ back in 1889, how much more so does it strike a chord now, in the craziness of the 21st century?

There’s something magical about that feeling of stepping back in time when you stroll through an ancient place, and imagine it as it was a hundred, two hundred, even a thousand years ago. 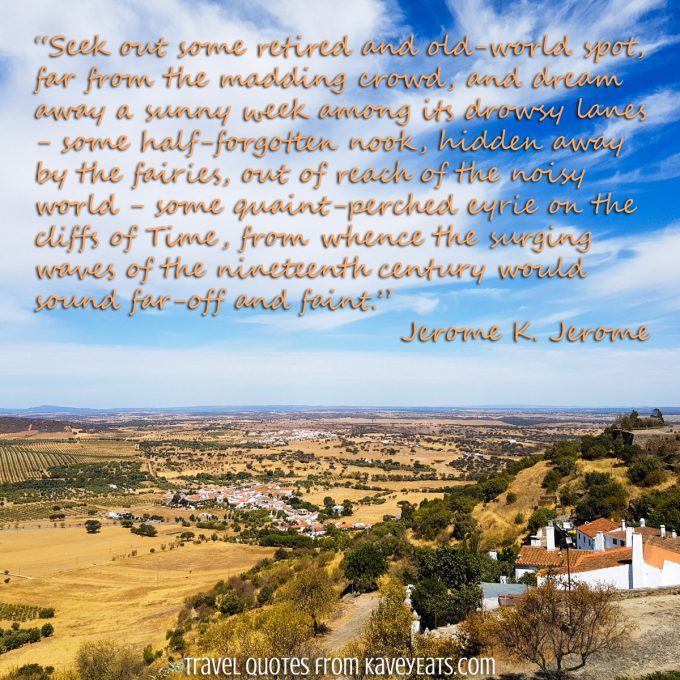 The beautiful hilltop village of Monsarez in Portugal’s Alentejo is just such a place; there is evidence the hilltop has been settled since prehistoric times. In the last two millennia, many different powers have occupied it, each leaving their mark.

Today, the castle and village are both well-preserved and a popular tourist attraction, not least for the stunning views out over the landscape in all directions.

Please leave a comment - I love hearing from you!8 Comments to "Travel Quote Tuesday | Far From The Madding Crowd"