The first Jackson + Rye opened in Soho in 2013, a successful launch by Richard Caring, one of London’s best known restaurateurs. Sites in Chiswick and Richmond followed. The latest, near Bank station in the City, is the second new site after Kingston since the chain was purchased by Cote Restaurants in January this year.

Located in a large office building on Old Jewry, the space is absolutely huge with seating for 240 covers. It’s an attractive interior with high ceilings and the space is cleverly divided so that it seems more cosy than the size might suggest. 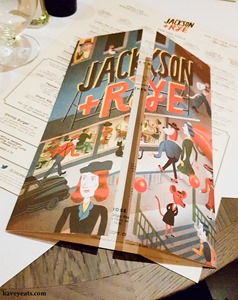 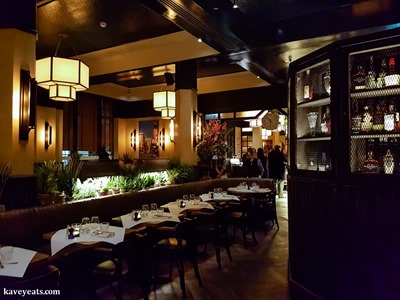 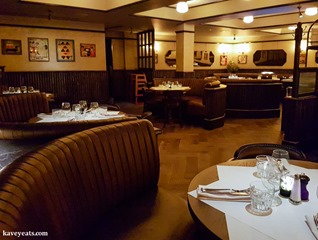 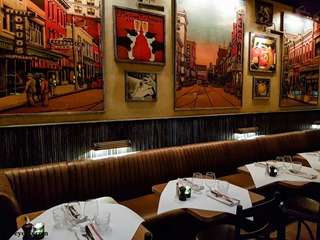 But be warned, the place is loud loud loud – during our visit early on a weekday evening only a handful of tables around us were taken but the sound level was high enough that it was a struggle to talk to each other across the table. The decibel level is not helped by the large and clearly popular bar area full of jovial city workers letting loose after work. 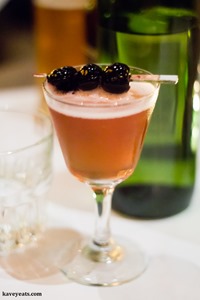 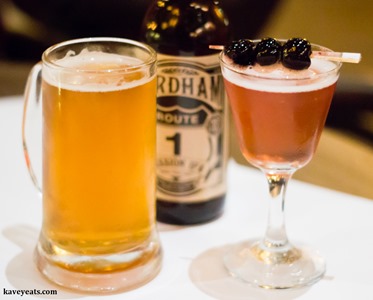 The drinks menu offers cocktails, wine, a few beers and an extensive selection of American bourbons and rye whiskeys.

My Winter Sloe cocktail (£7) was absolutely delicious, especially the three rather good cherries on top. A combination of sloe gin, peach schnapps lemon and peach bitters, the bartender accurately heeded my request to go easy on the bitters meaning it suited my tastes perfectly.

Pete enjoyed a bottle of Fordham Route 1 beer (£4.90), a session IPA. He found it pleasantly hoppy with a  gentle floral aroma – it was a light session beer with a soft sugary sweetness balanced by a lingering, slightly resinous bitterness. 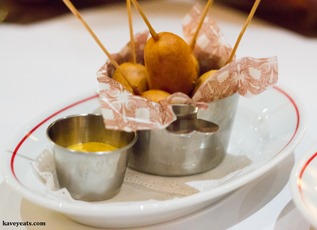 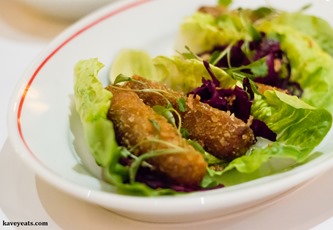 To start we ordered one dish from the sharing snacks at the top of the menu and one from the ‘Appetizers’ [sic] section; the spelling and menu sections are unashamedly American.

Our other starter, the Pulled Pork Cups (£6.25) were also good for sharing between two or four. Soft pulled pork was formed into cylinders before being breaded and fried. Served in little gem lettuce leaves with some pickled red cabbage and coriander, this was a tasty snack – all the better for allowing the pork to shine rather than smothering it in an overly sweet barbeque sauce. 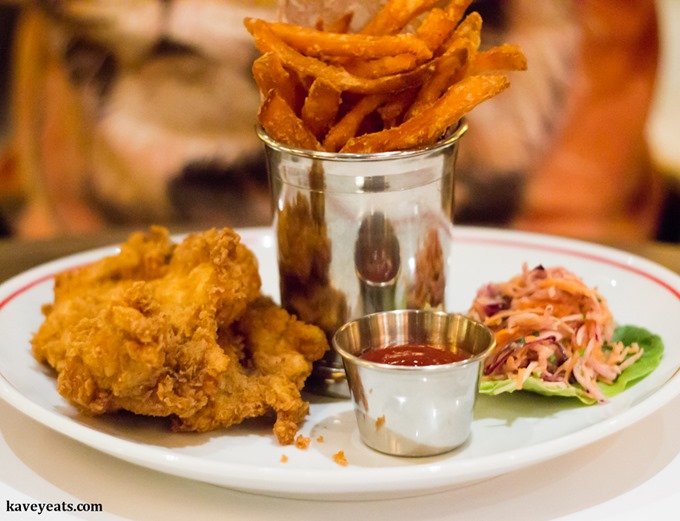 As a little interesting aside, you may have noticed that Americans use the word entrée to refer to the main dish, rather than to the starter, as is the case in France. I originally wondered if an early American menu writer looked in a French-English dictionary and didn’t realise that entre (which means ‘between’) is a completely different word to entrée (which means ‘entrance’ and is used to signify the start). But that’s not the case at all!

In fact, it’s all down to what the word entrée  originally meant and two different modern interpretations stemming from it.

In the mediaeval era, the word entrée in French referred to the entry of a grandly trumpeted parade of dishes from the kitchen into the dining hall. The entrée was usually a series of dishes which, after being walked around the entire hall, were served only to the top table of dignitaries. The entrée dishes preceded the service of one or more larger dishes to the rest of the dining hall, known then as the relevé, a term which is now obsolete in this context.

In modern French, from which modern British English takes its lead, entrée has come to mean the dish that starts the meal, a nod to the order of that parade of service. But in America, it is the type of dish typically served as a mediaeval entrée that governs the modern day usage – most of the entrée dishes were usually substantial meat courses, albeit succeeded by even heavier ones afterwards. The current American usage of entree as main meal stems from the notion of a generous meat-based course.

Coated with a wonderfully crisp and light batter, the chicken meat was soft and moist and with good flavour. The spicy coleslaw was light rather then overly rich and creamy, which worked well with the fried chicken, though it wasn’t very punchy on the spice. Also a good foil to the chicken were the very very delicious Cajun sweet potato fries – again, the Cajun spicing was in scant supply but the chips were perfectly cooked and very tasty. 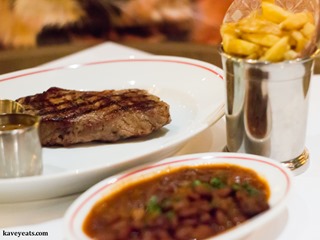 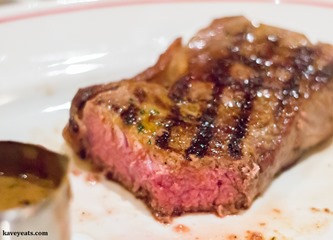 The steak was cooked a little closer to medium than my requested medium rare but was decent enough in flavour and texture. I loved the smoky garlic butter but wished the steak had been hot enough when served to melt the butter, provided in a small metal condiments bowl on the side. The smokey rye sauce was disappointing, with no discernible taste of rye whisky. Indeed I queried whether I’d been accidentally served a peppercorn sauce in error but was told they were virtually the same. Confusing! As a peppercorn sauce, it was tasty enough.

Pete liked the Boston baked beans more than I did; I found the flavour of the sauce a little flat – the one I make to a Hugh F-W recipe is far better – and the bacon pieces were oddly dry and chewy. 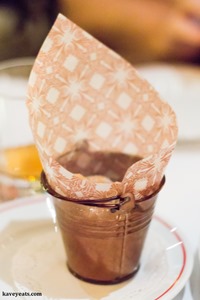 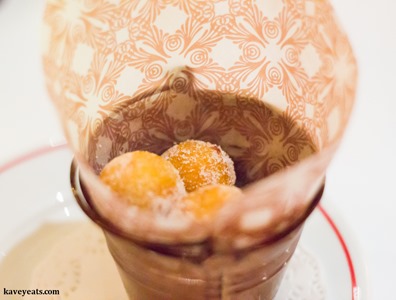 While we’d enjoyed the starters and mains, we found the desserts very disappointing.

Although we didn’t expect a large portion of Apple beignets (£2.95) for the price, the metal bucket they were served in made the portion look miserly, hidden well below the rim of the bucket as you can see. More disappointingly, although the little doughnuts had a gorgeous colour on the outside, most of the dough inside was horribly undercooked – these were left uneaten. 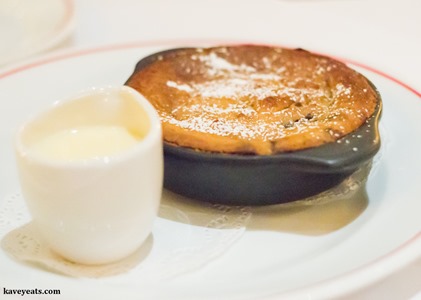 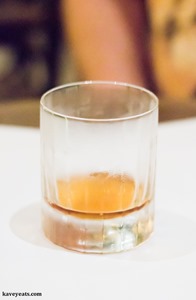 The Blueberry & Apple Cobbler (£6.50) also disappointed. Instead of a generous layer of fruit with a wonderful dumpling or batter topping, what was served was a lacklustre batter pudding with a measly amount of fruit within it. Indeed the very mild vanilla custard had more flavour than the pudding itself.

Pete’s taste buds were at least more than mollified by a glass of Dad’s Hat Port Finish (£8.0), an American rye. It had a rich dried fruit aroma with wonderful barrel wood notes. Stronger on the tongue than he expected, it had lots of cherries and other dark fruit, a rye sweetness, but with quite a sour edge in the finish.

For a group meal where noise is not a factor, this could be just the place. Certainly I rather like the idea of coming with a few friends and ordering nothing but snacks and starters, which were the strongest course of our meal. Mains we thought pretty decent on the whole but desserts were rather a big let down. For the pricing, that’s not quite good enough, despite being reasonable for the area and probably considered a bargain by much of its customer base.

Please leave a comment - I love hearing from you!18 Comments to "Jackson + Rye | American Dining in London"

Leave a Reply to Sally - My Custard Pie Cancel reply