When Fiona threw down the cheese gauntlet with her Ultimate Macaroni Cheese Challenge, I could not resist!

Macaroni cheese is a dish I adore and, like so many, have very fond childhood memories of. And yet, I hadn’t made it for years and years and years. What an oversight! Such neglect meant I didn’t have the confidence to create my own original recipe. I thought about entering the best use of artisanal cheese category and popping down to Neal’s Yard Dairy for some Montgomery’s Cheddar or whatever else took my fancy, but I didn’t have time to schedule a visit. And I’m not well placed to suggest the best drink match, given that I enjoyed my macaroni cheese with a can of Coca Cola, though Pete said it went well with the Bergerac red he opened. So I guess I’m aiming for the most mouthwatering photo (or series of photos)! What this means is that, for the first time ever, I tried to think ahead about how I wanted to photograph the ingredients and finished dish. My main photographic interests are travel and wildlife and I tend to shoot candidly, so working studio-style feels alien to me. Having long lusted over the magnificent photography on blogs such as La Tartine Gourmande, Matt Bites and What’s For Lunch, Honey? I knew I’d never match their skills with food styling and design. But instead of grabbing a couple of snapshots on the kitchen worktop as I usually do, for the first time ever I set up a makeshift table (on a cardboard box), chose and draped a new red travel towel as backdrop, thought a little about my choice of dishes and presentation and roped in my husband to hold an off-camera flash to the side for me whilst I took the photographs.

Of course, the other decision was which recipe to choose? For the last several days, Pete and I have been tidying the spare bedroom. This has been a week-long process because of my hoarding nature and our mutual hatred of house work; both of which had lead to a tottering mountain of boxes of stuff which we always intended to deal with shortly after boxing, but never did. In one, I found greetings cards from our wedding day (in 1994), in another we discovered work files from a job I barely remember and in yet another was a pile of Sainsbury’s and Waitrose Food Illustrated magazines from 1999 to 2001! Scouring through these magazines for “keeper” recipes (including a great one for chicken and garlic by Fiona herself) I found not one but two macaroni cheese recipes; I took this as a sign that I absolutely had to enter the challenge!

So I chose the Nigel Slater recipe I found in an old Sainsbury’s Magazine. 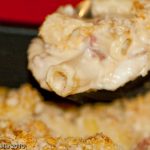 Adapted from Nigel Slater's Really Good Macaroni Cheese. Note: Nigel's recipe calls for about 100 grams of cheddar cheese, but we upped this to 150 to suit our tastes. We also switched from macaroni to tortiglioni pasta tubes. 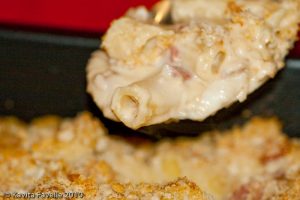 The flavour was really lovely, with the bacon and mustard complementing rather than overpowering the cheese, and the Davidstow providing a lovely rich flavour. But for me, the texture was too stodgy. Talking to Pete though, it seems it’s a matter of preference as he thought it was just as it should be! I realise I like my macaroni to be much looser and saucier; essentially, I want the texture we had when we poured the pasta and sauce mixture into the baking dish.

Given that the mixture is hot when it goes into the baking dish, next time instead of baking it in the oven for half an hour, I’m going to pop it under the grill for a much shorter time. That should allow the breadcrumb topping to brown without drying out the pasta and sauce beneath.

Please leave a comment - I love hearing from you!21 Comments to "The Ultimate Macaroni Cheese With Bacon"