Diana Henry is a cook and food writer with six books under her belt including Crazy Water, Pickled Lemons, Cook Simple and Food from Plenty. She also writes for the Telegraph and its magazine, Stella, presents food television programmes such as Market Kitchen and broadcasts on Radio 4.

I’d read good feedback on her book of Middle Eastern, Mediterranean and North African dishes (Crazy Water, Pickled Lemons) and likewise, for her latest title, Food from Plenty, which aims to share recipes made from “the plentiful, the seasonal and the leftover”.

But I’d not really seen a great deal of discussion about her previous book, Roast Figs, Sugar Snow, originally published by Mitchell Beazley (an Octopus publishing imprint) in 2009, with a new edition released in November 2011. 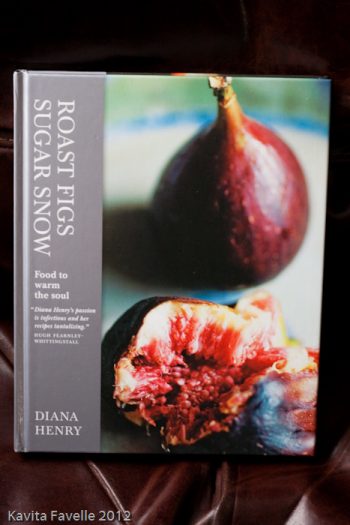 Having grown up in Northern Ireland, she adores snow, “its crystalline freshness, the silent mesmeric way it falls, the way it blankets you in a white, self-contained world“. For this book, she travelled to several other cold climate locations, compiling a collection of recipes that represent winter food.

As for the name of the book, a passage in her introduction partially explains:

“On dark afternoons, my fifth-year teacher read us the stories of Laura Ingalls Wilder. In the simple snowy world of the American mid-west found in Little House in the Big Woods, an orange and a handful of nuts in the toe of a sock on Christmas day seemed as alluring as the seeds from a crimson pomegranate; fat pumpkins gathered in the autumn and stored in the attic were fairy tale vegetables. But it was the story of maple syrup that intrigued me most: how you could tap the sap of maple trees when there was a ‘sugar snow’ (snowy conditions in which the temperature goes below freezing at night but above freezing during the day), boil the sap down to a sticky amber syrup and pour it on to snow. There it set to a cobwebby toffee. Here was a magical food that you could get from inside a tree and make into sweets. I got my first bottle of maple syrup soon after being read this passage and have loved it ever since.”

In a similar vein, throughout the book are passages from poems and books as varied as Robert Frost’s Evening in a sugar orchard, Blackberry Picking by Seamus Heaney, Figs by D H Lawrence, Wild Fruits by Henry David Thoreau and Hans Christian Andersen’s The Fir Tree.

Photography, by Jason Lowe, is beautiful and evocative. There are images of big hearty dishes, ingredients and scenes from the places whose food Henry brings together. That said, many of the recipes – I’d say well over half – don’t have an accompany photograph, so this may not suit those who prefer to see what all finished dishes look like.

Oddly enough, whilst I really loved reading this book, flicking from recipe to recipe, reading the introductions and stories about the places, ingredients and dishes, I found that there were only a handful of recipes I want to actually cook. Partly, this is because there’s a Northern European preponderance of walnuts and pecans, poppy seeds and cinnamon, dill, prunes, cranberries and juniper berries, chestnuts, dried mushrooms and smoked fish. Some of those ingredients I like, in some contexts, but less so in cooking. Others, I’m simply not a fan of. I like this book but can’t see me using it very often.

That said, there are still many recipes that appeal as great comfort for a cold day – Antico Risotto Sabaudo (a Fontina-rich risotto), Poulet Suissesse (chicken with crème fraiche, mustard and cheese), Sobronade (an every day version of cassoulet without the duck), Beef Pie with wild mushrooms and claret (billed as better than cleavage for its seductive powers), Dublin Coddle (a layered bake of sausages, bacon, onions, potatoes and chicken stock), Poires Savoyards (cream, butter and sugar baked pears), Hot Lightning (featuring apples, pears and bacon), Apple Bread, Roast Figs and Plums in Vodka with cardamom cream and Scandinavian Pepparkakor (Christmas biscuits). 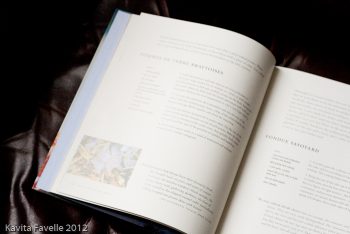 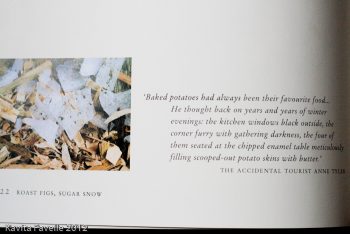