Stoke House describes itself as a ‘contemporary take on the Great British Carvery‘ and specialises in meats roasted in a wood fire smoker. Recently, they’ve rethought their original buffet service approach and switched to waiter service at your table. They’ve also added small plate options to the menu as well as some meaty sandwiches served from noon to six p.m.

We visited to review one recent Friday lunch time for a relaxing feast after what turned out to be an anything-but-relaxing visit to a special exhibition at the British Museum – wonderful content but more crowded than the London Underground in rush hour!

Stoke House is located within the newish Nova complex near Victoria station, so it’s particularly handy for anyone seeking a pit-stop during a train or bus journey through one of London’s transport hubs, or for those who live or work nearby. Nova is a mixed scheme offering residential and office space along with space for several restaurants, and the wide central corridor between the two buildings forms a rather pleasant outdoor space. Most of the restaurants have outdoor tables here, and trees and seating along the middle give locals a place to sit and relax when the weather is decent. 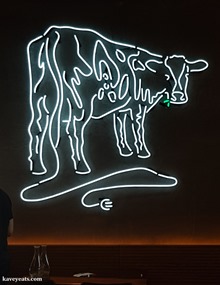 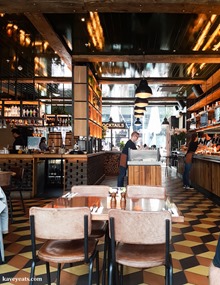 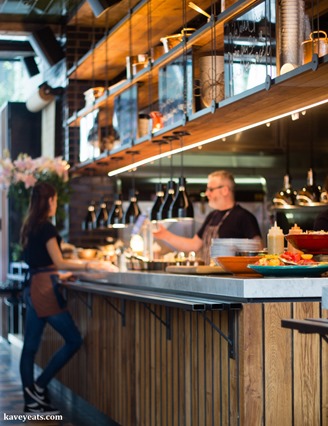 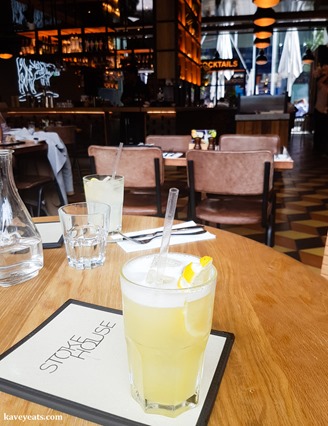 The drinks list is a bit meagre; Pete found the beer selection very limited (only two lagers and an IPA to choose from) and I wasn’t very excited by the cocktails list. I did enjoy my Skinny Colada (which uses coconut water rather than milk, I think, hence the variation on the usual Pina Colada name). 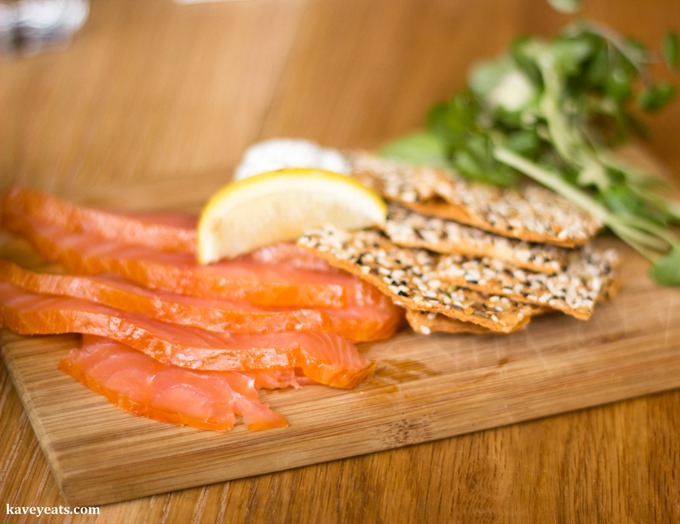 We started with two dishes from the Small Plates section, which our waitress told us is essentially Starters by another name.

The secret smokehouse salmon, dill crème fraiche, seeded crackers (£8) was lovely, served in thick slices, it had a perfect silky texture, a nicely balanced and not-at-all overpowering smokiness and worked beautifully with the seed-strewn crackers and dill crème fraiche. 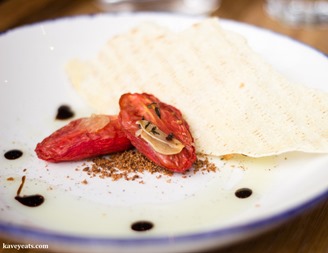 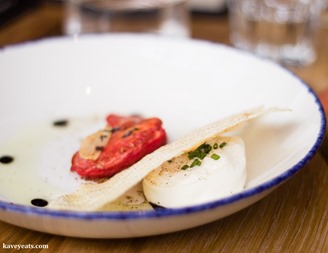 We were momentarily discombobulated when the Burrata, San Marzano tomato (£8) arrived with no visible sign of the headline ingredient – it seemed odd to hide the burrata under the crisp bread like this! But both the roasted tomato and the burrata were utterly delicious, indeed it was some of the best burrata I’ve had recently I just wish there were a little more of it in the serving. 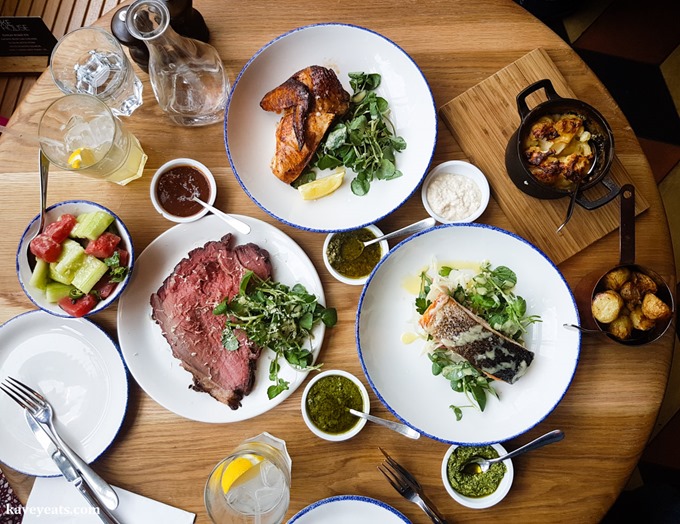 Instead of choosing two mains, one of the staff suggested we choose three, since many of them come in small, medium and large portions and we could get a feel for more of the menu. Note that none of the mains come with sides included, so you need to order these separately.

We chose Cornish roast rump of beef, watercress, grated horseradish (£12 / £16), smoked beer can roast chicken (£6.5 / £12) and Scottish wood roasted salmon with fennel and cress (£8) plus sides of garlic and thyme roasted new potatoes with maldon sea salt (£3.5), smoked cauliflower cheese (£4.5) and one of the day’s salads, smashed cucumber and watermelon (£3.50).

Our waitress also suggested we try all four of the available sauces, though we’d usually just pick one or two. Salsa verde, chimichurri, wild lovage pesto and Stoke chilli sauce are all £1 each. 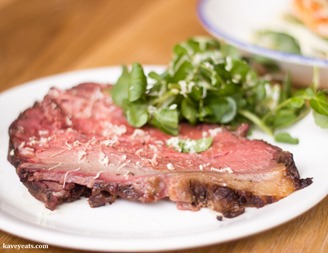 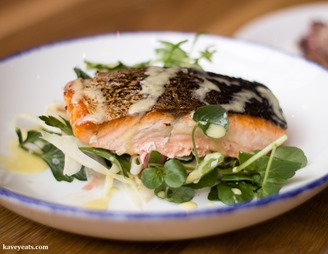 The rump was a beautiful (and beautifully cooked) piece of beef, though it was cold when served to us, and no that’s not because of a long delay while I took pictures. I’m always so impatient to eat that I spend only a few seconds on photos per dish before we dive in! Though we ordered the smallest portion, it was still very generous.

The salmon was beautifully cooked, though I found the salting on a skin a little too heavy, it was still a good dish. But again, it was served warm rather than hot.

All four sauces were really good, and worked very well with the three mains we tried. We were also given some horseradish for the beef, which had a pleasantly punchy flavour. 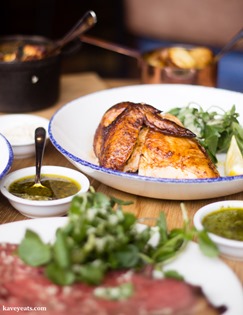 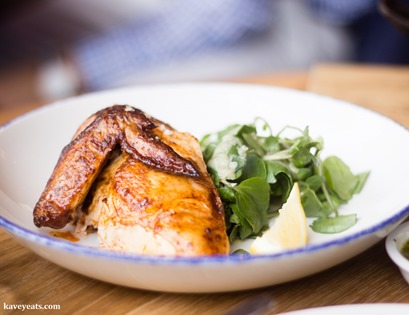 Our favourite of the three mains was, to my surprise, the smoked beer can chicken. I rarely order chicken when eating out, though we cook it a lot at home so it’s not that we don’t like it. It’s just that breast can be so bland, and often dry to boot. Here, the meat was fantastically tender and moist, with a really wonderful kick of smokiness in the flavour. The marinade on the skin was delicious too. We loved this dish! 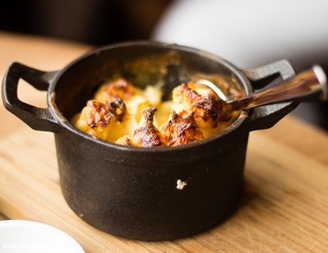 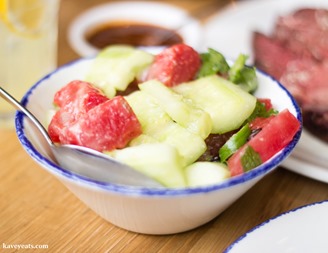 The smoked cauliflower cheese was the most disappointing dish of the meal, not only because it was stone cold when served (despite coming in a cast iron pot that we were warned was hot to the touch – it wasn’t) and there wasn’t even a hint of smokiness to the flavour either. It was all a bit mushy and underwhelming.

Luckily, the garlic and thyme roasted new potatoes (pictured only in the overhead photo) were excellent, fairly hot when served, and made up for the cauli cheese.

My favourite side was the cucumber watermelon salad, which I just adored! The sweet sharp pickling liquid was perfectly balanced, giving the sweet watermelon just the right savoury note, and the cucumber, coriander and mint were spot on. 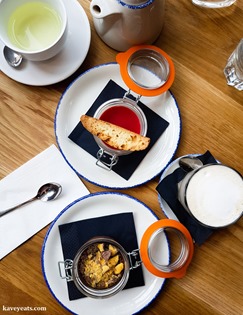 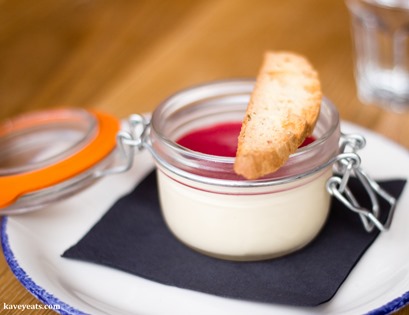 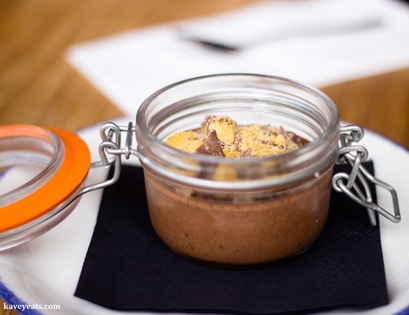 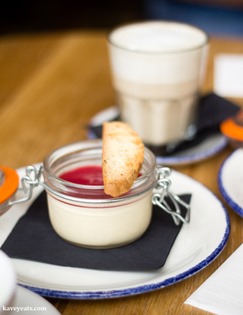 We didn’t really need dessert, as is so often the case, but were encouraged to try so we could assess the full menu. We chose lemon posset with fennel biscotti (£5.5) and chocolate mousse with honeycomb (£5.5).

The posset came with a layer of raspberry on top, and was smooth and delicious but completely unset. I don’t know whether this was a deliberate choice or someone just didn’t cook the posset mix long enough (I’ve made this many many times and it should set to a wonderful thick texture that the spoon pushes into and leaves a distinct spoon shaped hole behind). It was tasty but more of a lemon cream than a posset.

The chocolate mousse on the other hand, was excellent with a good rich flavour, perfect texture and lovely topping of chocolate-coated honeycomb. Tea and coffee were fine too. Although I’d prefer a few more choices on the tea front, I somehow suspect that not many visitors ask for tea here!

Overall, we enjoyed most of the food very much, marred only by the issue of several dishes arriving lukewarm or cold – discussing with the manager we were told it’s a known issue and one they are working on. Certainly I hope they resolve it soon as it’s really the only let-down in an otherwise appealing venue.

Please leave a comment - I love hearing from you!39 Comments to "Wood Fire Roasted Meat & Fish at Stoke House, London"