Wild garlic is enjoying a surge in popularity this year, or so it seems to me.

I first had it only last year, at Konstam and absolutely loved the pervasive garlic flavour in the wilted leaves. At around the same time a porkchop-blagging blogger quickly became London’s best-known source. A few months later, it entered my consciousness again, when Mat Follas named his restaurant for it. This year, I’ve seen it mentioned, bartered and used in a variety of recipes by food blogger and twitter friends.

By the way, in the UK, when we talk about wild garlic we’re usually referring to ramsons (allium ursinum), a wild relative of chives. From wiki, I learn that “the Latin name owes to the brown bear’s taste for the bulbs and habit of digging up the ground to get at them” which also explains another of it’s aliases: bear’s garlic.

It was my turn to get in on the wild garlic action. But where to get some? My downright desperate appeals to the porkchop meister had gone unheeded. Luckily, a friend was willing to share his secret location (on the basis of my not passing it on, so don’t ask!) and it wasn’t long before I was pushing my way through some dense woodland foliage to access the pungent plants.

This was back at the beginning of May, so the flowers were just in bud. I harvested only leaves, taking care not to disturb the bulbs, damage the plants or take the buds. 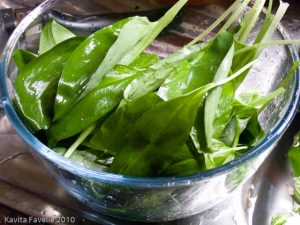 I wasn’t too adventurous with my first bounty, following MarkyMarket‘s suggestion of stuffing leaves into a chicken’s cavities before roasting it. I also smeared copious amounts of butter onto the skin a la Simon Hopkinson; this is now my default treatment for very quick and succulent roast chicken. The wild garlic stuffing worked wonderfully – the leaves gave a very subtle hint of flavour to the bird and I enjoyed them as a side vegetable too. 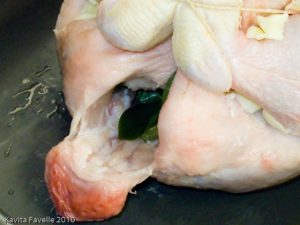 Having picked enough leaves to also make soup, but not being in the mood to make it once i got home, I blitzed the remaining leaves raw with oil and froze them. I’m hoping this paste will work as a starting point to a wild garlic pesto (adding pine nuts and parmesan after defrosting) or maybe a simple pasta sauce (with some pancetta fried in the wild garlic oil mixture. 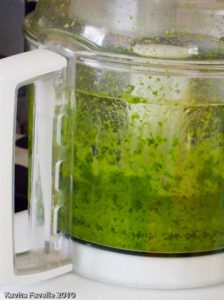 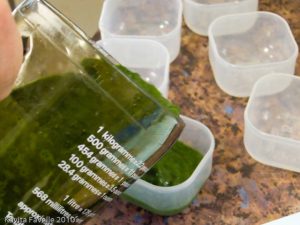 Please leave a comment - I love hearing from you!3 Comments to "Wild Garlic Part 1: A Leafy Stuffing"