This little gem of a shop is tucked away in a back street, just off Marylebone High Street, next door to The Ginger Pig. I worked just a few minutes walk away on Baker Street for over a year, a few years back, and never stumbled across this lovely store, even though I’d idle away lunch breaks in Daunt books, also close by. 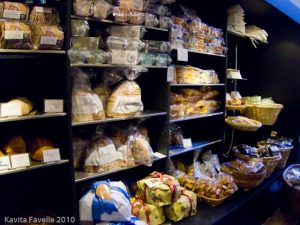 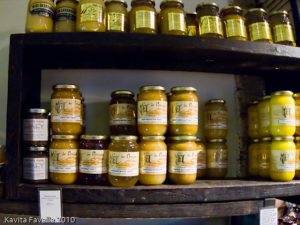 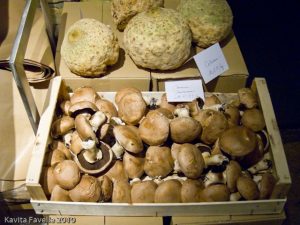 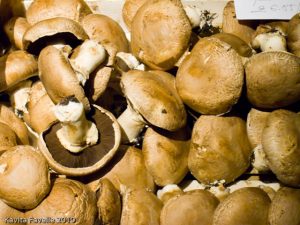 I hadn’t realised that the store is far more than a cheese shop, but more of a deli selling charcuterie, fresh produce, bread and baked goods, honey, all kinds of preserves, chocolates and candied fruit… 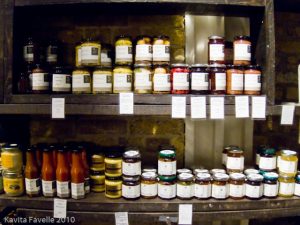 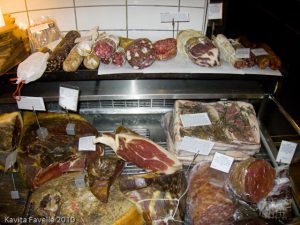 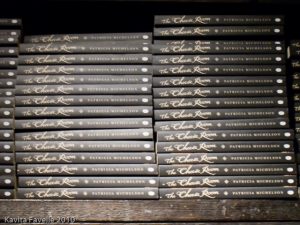 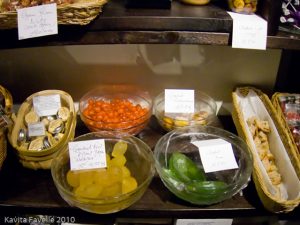 So how did I come to find it now? I was invited to an event organised by Vive Le Cheese and hosted by La Fromagerie.

Vive Le Cheese is a campaign to promote the enjoyment of French cheeses – not just the handful of bries, camemberts and roqueforts that are most widely consumed in the UK, but the full diversity and wonder of France’s cheeses.

In their own words: “the objective of the campaign is to raise awareness and make consumers more familiar with French cheeses, their flavours and styles and, above all, the ways in which they can fit into a modern European lifestyle, adding a certain “je ne sais quoi” and pleasure to everyday moments.” The literature also mentions their intension to appeal to a younger age group (18-35). 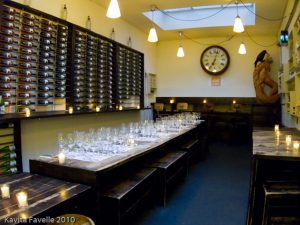 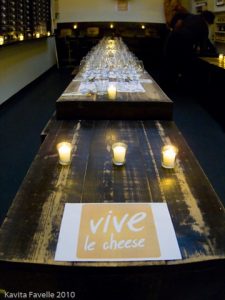 20 or so bloggers duly assembled in the shop of a weekday evening and, as we waited for the event proper to start, explored the store, chatted, enjoyed the proffered drinks and cheesey canapés.

After welcomes and introductions from Katrina Alloway (the food and wine writer who organised the event) and Patricia Michelson (La Fromagerie’s owner) we are divided into three groups for the three sessions.

My group, serendipitously the smallest, begins with the cheese tasting. 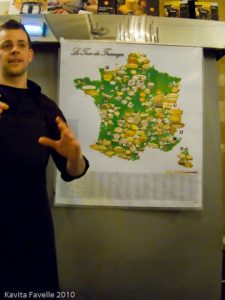 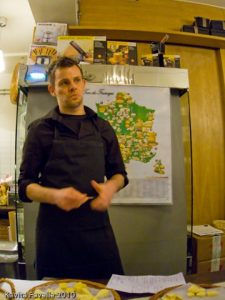 The handsome Jean-Bapiste Manin, hailing from the ballad to gastronomy that is Lyons, took us through 10 french cheeses, 9 of which I was already pretty familiar with and one I’d neither heard of nor tried before.

The cheese was pretty good, (see my tasting comments below). Some of the cheeses were new to some of our little blogger group, and it was actually lovely to be able to watch peoples’ first tastes and reactions to these wonderful cheeses.

Tasting something fabulous for the first time is a magical moment indeed! 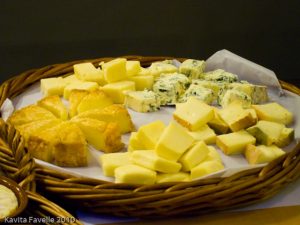 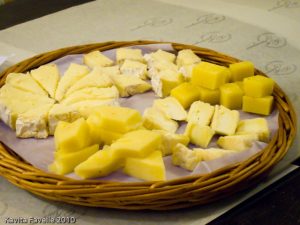 Here are my tasting notes:

Saint Marcellin from Isere/Dauphin
How can one not be drawn to a delicious little cheese that comes in it’s own darling little clay dish? This pale medallion shaped cheese has a greyish-white bloomy mould and, when ripe, it oozes in a most delightful way. It’s not a smelly cheese, which will suit those who can’t abide the “smelly foot” stink of some cheeses. It’s soft and yet dense, feels creamy and smooth in the mouth and has a slightly acerbic taste.

Emmental Français Grand Cru, Savoie
A young Emmental doesn’t do that much for me, though it’s very mild sweetness is popular with some. But a well aged specimen like this is a different thing altogether! Sweet, nutty, waxy and yet still softer and bendier than other cheeses with similar flavours, it’s great as both an eating and a cooking cheese.

Camembert Fermier, Normandy
A traditionally farmhouse-made Camembert can so easily become lost amongst the mass produced versions of this famous French cheese. This one has a reassuringly farmy smell, is wonderfully soft in the middle – I’m not so keen on the chalkier texture of less ripened camemberts – and is a good choice for those looking for a milder cheese.

Brie de Meaux, Ile de France
When you buy Brie, you really ought to choose a decent one. As with Camemberts, there are so many insipid, cheap versions. Brie de Meaux won’t disappoint – the golden yellow flesh has a very rich, creamy, almost oily texture surrounded by a satisfyingly thick, bloomy white rind – my favourite bit! One can definitely taste the umami in this cheese – it has an almost meaty richness of flavour.

Comté d’Estive, Franche-Comte
“Comté man”, as I think of him, has long been a popular stall holder at Borough Market. Because a good, aged Comté is a wonderous thing. Well-aged beauties with their pale yellow solid interior and unassuming brown rind have a distinct fruity, nutty flavour and delightfully granular texture. I love the salty-sweet balance of this cheese.

Reblochon, Savoie
This is a cheese I buy often for cooking, though that’s not to say it’s not a lovely eating cheese too. Semi-soft yellow flesh inside a pinky-orange washed rind, it’s a gentle cheese with a squishy texture and mild, slightly nutty taste. An essential ingredient in tartiflette, I really like it in Pete’s Cheesey Potato Bake, alongside a stronger hard cheese such as a Comté and a third cheese such as a blue or perhaps some Epoisses. Although this is a mild cheese, the La Fromagerie sample is a particularly mild one. Jean-Bapiste recommends Abbaye de Tamié as a more strongly flavoured alternative.

Saint Nectaire, Auvergne
I first came across this cheese whilst staying with friends who run a B&B in the Corrèze, in Limousin. It’s made in the neighbouring departement of Auvergne and available for sale in the fantastic produce market at Brive. The one I bought there was older than the one served us by La Fromagerie, and had a harder texture and more robust flavour. This younger one was much softer but still had the mushroom and straw taste I remembered, albeit only mildly so. I think this is a good choice for those who want to venture out of their normal range for semi-hard and hard cheeses without being overwhelmed by too strong a taste.

Epoisses Affine, Burgundy
My friend Dan thinks Epoisses smells and tastes like a dead body (though the mind boggles that he’d know 😉 and he’s not wrong that it’s a stinky, stinky cheese. When ripe, its interior is oozingly soft, just short of cloying, and the Marc de Bourgogne-washed rind is sticky and stinky in equal measure. But oh, the taste, it’s sublime! Pungent, yes but rich. And awfully hard to put into words!

Fourme d’Ambert, Auvergne
I think this blue is pretty well known in the UK. Often sold in disc-shaped slices this is an easy blue to like. It’s very, very creamy, has a salty sharpness but not too much so and I detect a little sweetness in the aftertaste. It’s a good balance between the raw aggression of some blues and the weedy subtlety of others.

La Fromagerie also sell this cheese macerated in Sauternes which I’ll definitely have to seek out, next time I’m in one of their stores.

Vache Porte d’Aspe,Valley d’Aspe, Pyrénées-Atlantiques
This cheese is a shocker! It’s so strong that it makes my tongue tingle. Actually, it feels like it’s burning, a strange chilli-burn sensation. From a cheese! The flavour is rich and complex with hints of minerals and ammonia. It’s like nothing I’ve had before and I can’t quite decide whether I like it or not.

I buy some for my husband, as I’m a chilli wuss whereas he’s keener on that mouth burn feeling and, like me, he likes strong cheeses.

When I get home I can’t find out much more about it. The tasting sheet lists it as “Vache Porte d’Aspe” but there’s not much at all on the interwebs. I think another favourite of mine, Ossau-Iraty, a hard sheeps milk cheese, is made in the same area.

A bit of an enigma, this one, but certainly different and it got us all exclaiming and talking about it! 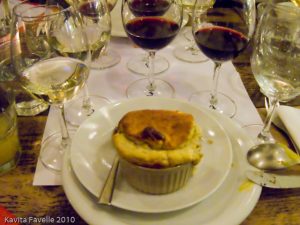 Our group’s second session was the wine and food pairings.

Two regular whites, two reds and one dessert wine (all French, of course) were provided and a number of hot dishes featuring French cheese. I’m not a fan of regular wine so I stuck to the lovely Sauternes and focused on the dishes themselves. The others were encouraged to try each of the five wines with each of the four dishes and decide which wine they felt best matched each dish.

The reblochon fritters and spiced butternut squash soup were tasty. I liked the rich, sweetness of the soup against the salty savouriness of the cheese.

I rather liked the camembert and fig tart with hazelnut and parsley vinaigrette – the subtle creaminess of camembert always works so well with fruit. The nuts gave a nice crunch and the vinaigrette balanced the sweet with a little sharp.

I’m afraid I didn’t enjoy the roquefort and walnut soufflé with spiced pear chutney. For me the chutney was the best thing on the plate. Neither the flavour or the texture of the soufflé won me over, and yet I’m both a fan of roquefort and of savoury soufflés. I wasn’t the only one who didn’t thrill to this dish so perhaps the recipe or execution was a little off.

As for the dishes themselves, the recipes are part of the Vive Le Cheese campaign and can be found on their blog. 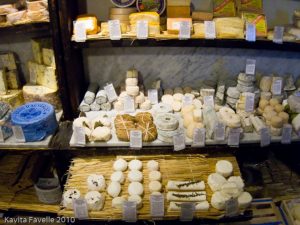 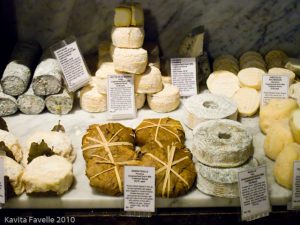 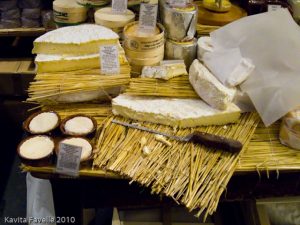 Lastly, we made our way into the glass-panelled cheese room, from where cheese is sold, for a talk from La Fromagerie’s affineur, John Peglar, known as JP. The bulk of their stock is stored and properly aged in three cellars (near the original Highbury shop, I think). John explained how he cares for the cheeses. It’s not just a case of storing the cheeses, as most cheese retailers do, but of applying whatever actions are needed to bring out the best in each cheese – the French art of affinage. This can involve anything from simply ensuring a cheese gets enough but not too much humidity and is stored at the right temperature, to creating and applying a wash to a washed-rind cheese, which can change the finished flavour quite significantly, depending on what is in the wash. 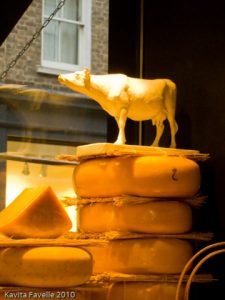 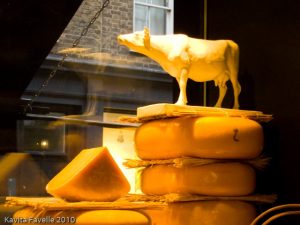 I confess I don’t remember much beyond that – perhaps the cold, cold room dulled my brain. 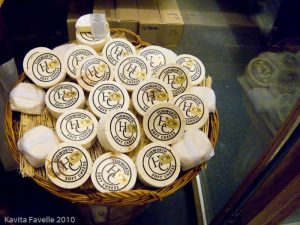 I did manage to keep it together sufficiently to select and buy a few cheeses to bring home with me, much to Pete’s appreciation. (He was intrigued by the strange Vache Porte d’Aspe too).

As both a Francophile and a turophile, I certainly enjoyed the evening. And I am all for any campaign seeking to bring the joys of French cheese to those who haven’t already discovered it.

Please leave a comment - I love hearing from you!8 Comments to "Vive Le Cheese!"