Ages ago, I took part in one of the Masterchef Invention Test sessions at the BBC Summer Good Food Show.

Sponsored by Miele (who kindly invited me to attend) the sessions were essentially a challenge to produce a single dish in 30 minutes from a set of ingredients revealed to contestants just a few minutes ahead of the session.

There were 10 of us on stage at a time, each at our own cooking stations on a low stage, surrounded by an alarmingly large audience watching our every move (and kindly, not sniggering much when I knocked my container of utensils off the surface with a very loud clatter!)

Somewhat dulled by the unearthly time I had to leave my house to make it to the NEC in time (though not as much as my friend Meemalee, who bullied persuaded me into going in the first place) I was alternately fatalistically calm and agitatedly nervous.

The night before, that’s when I really started to panic, regretting the decision to take part and worrying about making a complete and utter cock of myself. (You’d think, being me, this would be something I’d be used to by now, but actually, it never gets less embarrassing.)

I thought back to the many, many, many episodes of Masterchef I had watched and recalled my conviction that the contestants who did best in the Invention Test round were those who had a basic recipe down pat and simply had to adapt it to the ingredients on hand. After all, one could be fairly confident about basics such as flour, milk, eggs, cheese, fresh herbs, potatoes, citrus fruit, some kind of green vegetables and so on…

The trouble was that I didn’t actually know any recipes off by heart, let alone any that might be feasible in the short half an hour we had available!

Desperate, I surfed the internet, looking at food blogs and recipe sites, and eventually settled on thick American-style pancakes which I could hopefully combine with some kind of fresh fruit (I’d been mentally thinking of bananas or blueberries) and hopefully serve with some whipped cream

I’ve never made pancakes before. Papery-thin crêpes, yes, though not with great success. But pancakes, lovely and thick and light, no.

Still, I could think of nothing else, and hastily tried to memorise approximate amounts of flour, egg, milk plus the all-important baking soda. 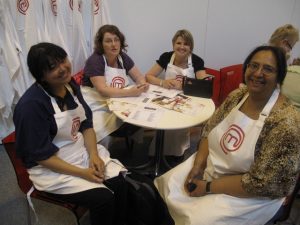 Competing in our session were my friend MiMi and fellow blogger and foodie friends Jo, James, Bron and Ailbhe plus four other eager/ terrified volunteers.

Meeting and greeting fellow contestants and also Mat, Dhruv, Tim and Alex in the waiting room helped divert thoughts from the challenge to come but all too soon it was time to follow compère, Andi Peters, onto the stage… 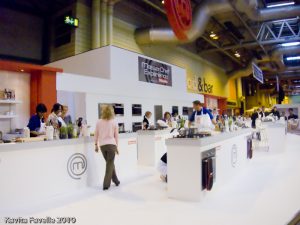 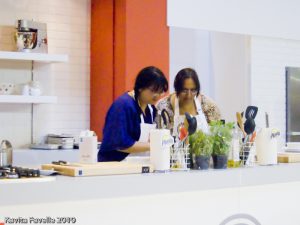 So what did we have to cook with?

As well as all the store cupboard basics (from flour to rice to seasonings to couscous to a whole lot more that I’ve long since forgotten), we had fridges full of milk, cream and eggs and then our mystery bags containing such delights as chicken, bacon, peas, celeriac, Stilton, raspberries, mascarpone, a vanilla pod.

Hands shaking more than I could have imagined, I measured out my memorised volumes of flour (150 grams) and milk (150 ml), mixed them in a bowl with a medium egg and a large knob of butter and threw in a random volume of icing sugar for good measure. And a generous teaspoon of baking soda. So generous it was probably nearer to two! 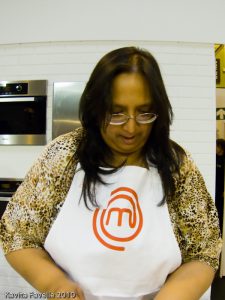 Leaving the thick batter aside to rest, rise or whatever it does I got to work on a side of vanilla mascarpone cream. I turned the mascarpone out into a bowl, and poured in some double cream to thin it out a little. Although I’ve seen it many times on the telly, I’ve never actually cut open and seeded a vanilla pod before. Doing so with shaking hands is not ideal, I can tell you. But eventually, the richly scented, sticky seeds from the entire pod went into the bowl. Next, I added some icing sugar and beat like hell. And tasted. Some more icing sugar and beat again. And a final shake and beat of sweetness and it was perfect. For my sweet tooth, anyway! 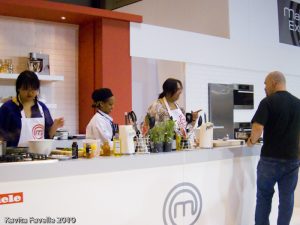 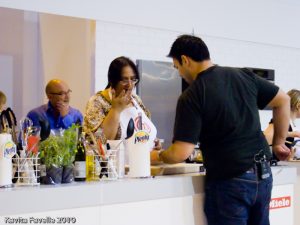 Nerves were not helped by Mat Follas and Dhruv Baker coming by, ostensibly to help the contestants as well as taste their ongoing efforts, but in reality, enjoying the chance to tease MiMi and I relentlessly!

Back to the pancakes, the batter looked good and thick with pleasing bubbles and I heated up a pan and threw in some butter. I think I may have added a little oil too, to stop the butter burning, which I usually do. But I can’t remember now if I remembered then!

I poured in a generous amount of batter and grabbed the box of raspberries, planning to scatter fruits onto the uncooked top of the pancake before flipping it over.

My pancake was a little rustic – a splat rather than a nice, shapely round. But still, it looked like a pancake so far!

Aaaaaargh! More than half of the raspberries in my little punnet were mouldy! Luckily, MiMi was cooking a delicious chicken dish so I was able to raid her box and make up a decent portion.

Raspberries were duly dropped into the pancake and I turned it over to cook the other side.

I served my pancake onto a plate and garnished with a dollop of the vanilla mascarpone cream, doing my best to make a neat quenelle but accepting that a blob was all I could manage.

This left me with a few minutes to spare so I decided to cook a second pancake, trying for a rounder shape. Success! Still not a particularly neat or dainty job, but it did look marginally better, so I plated up a second time, added a generous blob of vanilla mascarpone cream and a sprig of mint to garnish.

Dr Tim Kinnaird, standing on the side lines and heckling the two of us with evil calls and cackles (I was better able to tune it out than MiMi, stationed nearest the side of the stage), demanded a taste and I took the first plate over to him and Sarah (of Brays Cottage, maker of perfect pork pies). To my surprise, the entire lot was speedily polished off by Tim, Sarah and other audience members!

All too soon, time was up.

Dhruv and Mat were asked to choose three finalists whose dishes they felt should be presented to John Torode and Gregg Wallace for final judging. 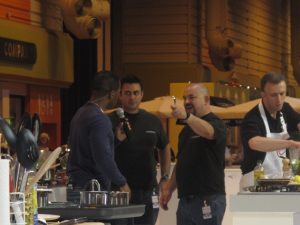 To my shock, my name was called and I walked to the front in a daze.

When my turn came, I took my dish across to John and Gregg who dived in.

Andi Peters referred to my earlier comment (made when the camera man came over and asked a few questions during the cooking time) that I’d not cooked pancakes before… and I realised how often I’d shouted at the telly when contestants cooked something they’d never tried before. Not clever, eh? 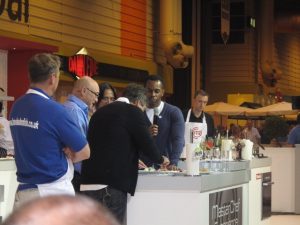 And then Andi asked Gregg for his thoughts.

“I tell you what, I have seen more attractive pancakes, but rarely have I tasted anything that delicious this time of the morning. Your balance of sweetness there, and vanilla, is absolutely right. You’ve got to somehow get some prettiness into your food but that tastes great. I’d quite happily finish that. In fact, I might!”

“Rich mascarpone, huge amounts of vanilla, sweet sugar and going with really nicely made pancakes with those sour raspberries running through the middle of it. Really, really well done! And as Gregg said make it more attractive, make them little and then just stack them up, do 5 or 6 of them all stacked up together and that’s it, it would have been perfect!”

Gregg: “But that looks really heavy and actually that’s as light as a feather…”

Andi: “It’s delicious is what it is, it’s lovely, very very nice!”

Gregg: “It’s great isn’t it? If you can make your food look as good as it tastes…”

And suddenly I understood why some contestants become so emotional when they hear John and Gregg’s words of praise about their cooking. It’s an incredible high, it really is! 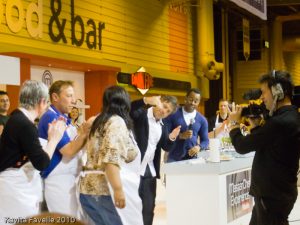 More shocking still, I was pronounced the winner of our session and, after John did a strange birdlike dance welcoming me back to the central station, I was presented with a certificate which John and Gregg signed. 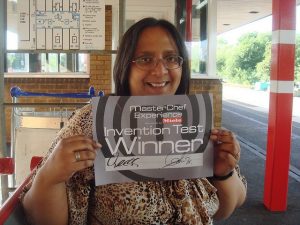 And I got a goodie bag as a prize! 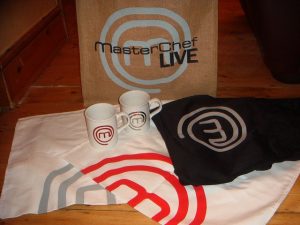 John disappeared back to the green room almost immediately (and Andi Peters seemed to show no interest in the contestants the second the session was over). Gregg proved himself the friendliest of the lot and chatted and posed for photos with the contestants. 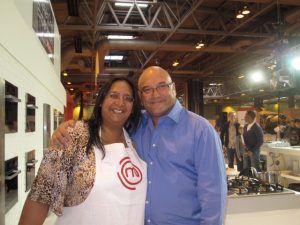 During the rest of the day, MiMi and I enjoyed a picnic lunch of Sarah’s rather perfect pork pies with some cider Mat brought along, had a very brief wander around the show, sat in the front row for a cook-off between Mat and Dhruv, met Olly Smith in the green room (during which I told him all about my trips to Antarctica to visit penguins and extracted his promise to share some Pingu scripts with us, now added to his website) and had another session on that rather public stage, this time trying to keep up during a cook-along with Barney Desmazery from BBC Good Food Magazine.

And I had my 15 minutes of fame – whilst MiMi and I were walking around the show, and in the Ladies too, a number of people congratulated me, having been in the audience! Surreal!

I had a great day, thanks to Forever Better, Miele for inviting me and to MiMi for pushing me into going! 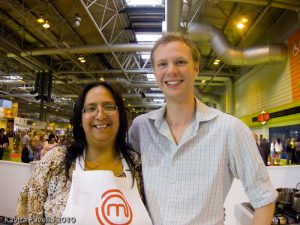 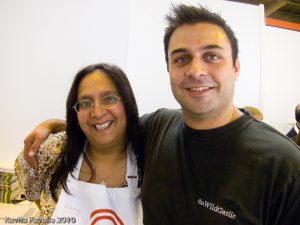 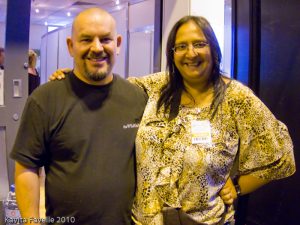 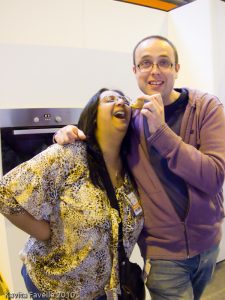 Me with Alex, Dhruv, Mat and Tim (feeding me Sarah’s pork pie, for some completely incomprehensible reason) 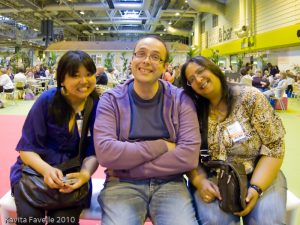 MiMi and I, with some strange Cake Doctor between us… 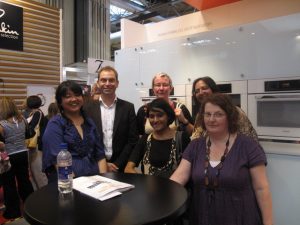 You can read other posts on the day here:

Jo’s Kitchen (check out the great videos of the session, particularly the second one in which you can hear all those lovely comments about my pancakes from Gregg, John and Andi)
Meemalee’s Kitchen
Simply Splendiferous
Eat The Midlands

Please leave a comment - I love hearing from you!8 Comments to "Under Pressure: Raspberry Pancakes With Vanilla Mascarpone Cream"