Last time I visited the Newman Arms on Rathbone St in London’s Fitzrovia neighbourhood, its restaurant was being run by the Cornwall Project, and offered a tempting menu of modern British cuisine. I loved it, so was saddened that it closed shop not long afterwards. This year, the Newman Arms was reopened afresh by beer enthusiasts, James Morgan and Michael-George Hemus as their first brew tap since the rebirth of the Truman’s Beers brand in 2010.

Click here to read more about the history of the Truman Brewery, from the 1600s through to today.

Although members of the Truman family are recorded as brewing beer as far back as 1381, Joseph Truman founded Black Eagle Brewery in the 1670s, naming it for Black Eagle Street, where it was located. In 1666 he started working at a brew house in Brick Lane owned by William Bucknalls, which he acquired and renamed on Bucknall’s death in 1679. Under the stewardship of Joseph and his son Benjamin, the brewery became very successful, not least because of a huge demand for its porter, developed in the 1700s, and one of the first beers that could readily be mass-produced. The brewery invested heavily to increase its brewing capacity during this century.

Benjamin Truman had no heir, so when he died he left shares of the brewery to his grandsons as well as his head clerk, James Grant, who took over the brewery’s management, the Truman family still partners but no longer actively involved in the business. On Grant’s death in 1788 his share was bought by Sampson Hanbury, who ran the company for nearly half a century, bringing in many modernisations such as steam-powered engines to increase effficiency and production so that the brewery could more readily supply the rest of the country. Hanbury’s nephew Thomas Buxton came took over in 1808 and continued his uncle’s efforts, increasing exports outside the UK – the East India Company, the British Army and the Russian Royal Court were just some of the large customers. Buxton, incidentally, was also a famous politician, and a key actor in the drive to abolish slavery. At some point during this period, the company changed its name, to be known as Truman, Hanbury, Buxton & Co.

In a further effort to expand production and also to compete with rivals in Staffordshire, the company purchased Philips Brewery in Burton in 1873, making it the largest brewery in the world. Although sales continued to grow, the company struggled to finance their business, and in 1888 they sought investment by becoming a public limited company. Truman’s continued to grow through the first half of the 20th century, massively increasing their pub portfolio (particularly in London and the South East) as well as buying key suppliers (in order to control the availability of raw materials, especially during the war years).

The mid-20th century also brought with it increased competition from imported lagers, as well as mergers amongst other British breweries, all struggling to maintain profitability. By the 1960s, Truman’s were the last big independent brewery in London, and a major business restructure (including the closure of the Burton brewery) helped them to grow profits towards the end of the decade. But in 1971, after a fierce bidding war, Grand Metropolitan bought out Truman’s and Watney Mann, merging them into a new business. The made many changes (including the name change of the company to Truman’s, working on a new brand, switching to kegs and changing the beers), all of which damaged the brewery irreparably, leading to its closure in 1989. After 323 years of continuous brewing at the Brick Lane site, the brewery and pubs were sold off.

In the years to follow, ownership of the defunct brewery ended up in the hands of Scottish and Newcastle. Here, we skip forward to 2010 when beer lovers Morgan and Hemus approached S&N in order to revive the iconic brand. Following S&N’s purchase by Heineken in 2012, the pair established Black Eagle Brewery Ltd and purchased the Truman’s company from Heineken.

The original brewery site long since converted (currently an arts and events space), Black Eagle Brewery created a new brewery site for Truman’s Beers in Hackey Wick, known as the Eyrie. It opened in 2013 and Truman’s Beer is now stocked in a number of London pubs, including their first tap house, the Newman Arms.

The Newman Arms is a historic pub, long associated with writers and actors, and those in related industries. It was allegedly the venue on which George Orwell modelled his “proles pub” in the seminal novel, 1984. After closing in 2015, it was reopened by the group which runs the Three Crowns, with The Cornwall Project running the dining room. Sadly, the lack of a sufficiently profitable lunch trade lead to it closing its doors the following year. This year, Black Eagle Brewery aka Truman’s Beer took over the lease and refurbished again before their May 2018 relaunch. 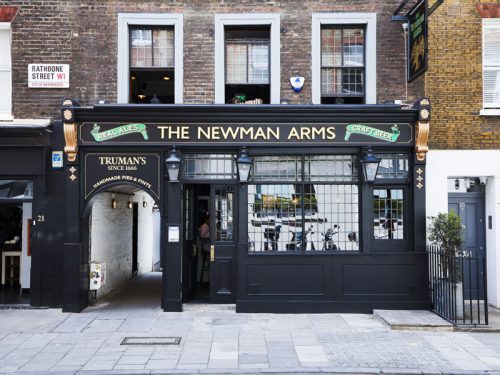 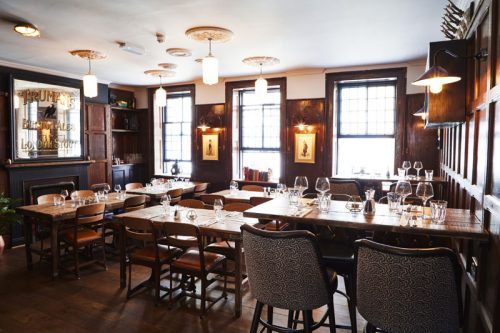 Of course, a key focus of the new Newman Arms is to showcase the Truman’s Beers range, and indeed they will also use it as a training ground on how to properly store, process and serve their beers to keep them at optimum quality.

To that end, Pete tastes his way through much of their range – find out which are his favourites below. As well as their own keg and cask beers, there are several other great beers on offer, plus your usual range of wine, spirits, softies and some very tempting cocktails.

The restaurant side (seating up on the first floor) has also changed completely and now serves a simple menu with a special focus on pies, a nod to Tracey Bird; the longest serving publican in the pub’s history, she had a reputation for excellent home-made pies.

In keeping with the pies, the menu also includes traditional East London favourites smoked salmon and salt beef bagels. Currently the desserts menu is very limited, but the new kitchen team plan to expand their sweet offering as they settle in. 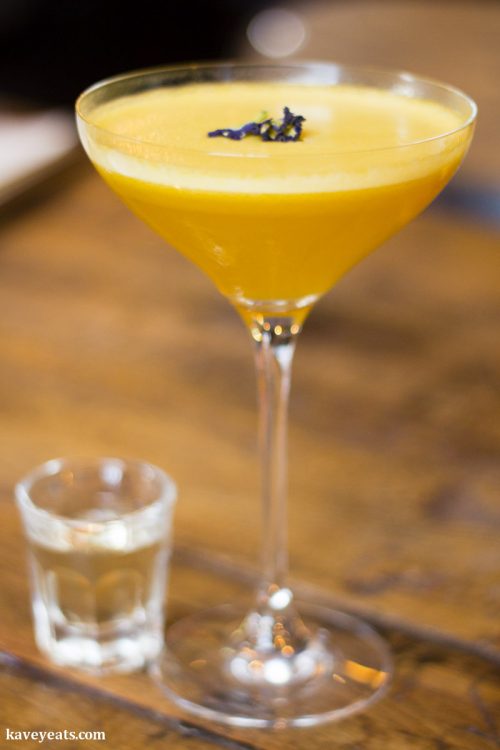 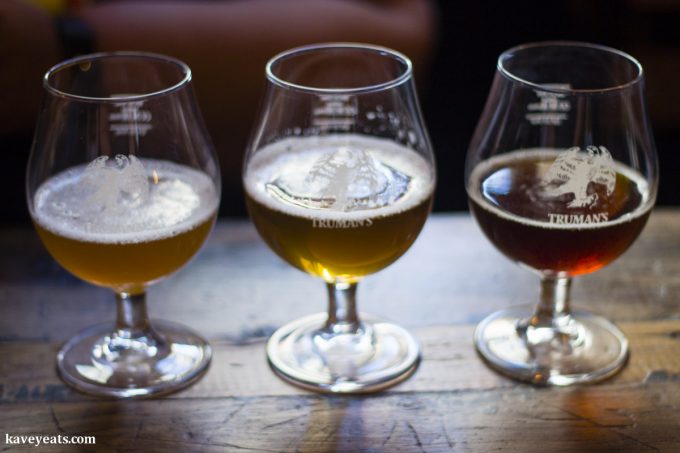 I absolutely love my Passion fruit martini (£8.50), served with a prosecco chaser.

Pete tastes several of the Truman’s beers during the course of the meal:

Truman’s core range of beers is very much split in two; their cask beers are solid, traditional offerings including Runner – ‘a classical Best Bitter, with earthy hops, a gentle bitterness and light caramel notes’ – and Lazarus, a ‘very pale ale’ with ‘a delicate honey and floral hop aroma and a nice balance of fairly deep bitterness set against a light sweetness’.

The keg half of the range is far more ‘crafty’ with all the usual suspects; the Pale that Pete feels is perfectly drinkable but on the edge of being bland, and the Raw Lager which is a pretty standard lager, albeit with a bit more bitterness than you usually find. Their Roller IPA is Pete’s stand out beer, he describes it as having ‘a nose full of tropical fruit hops, sugary sweet on the tip of the tongue quickly joined with more rich fruits and a nicely building, slightly resinous bitterness – it ticks all the IPA boxes.’  Bow Bells – once a seasonal beer but now made year-round – ‘is a citrus-heavy hoppy pale ale with oranges and lemons added’. For Pete, ‘the addition of the fruit muddies the hop flavours’, but he appreciates something different to try.

Talking of different, the seasonal offering during our visit is Scorcher, a pale ale with added grapefruit zest. Says Pete, ‘it certainly adds a huge grapefruit character, both in the aroma and the taste – it’s dry and bitter but the grapefruit is overwhelming, though may appeal to those who like grapefruit more.’ 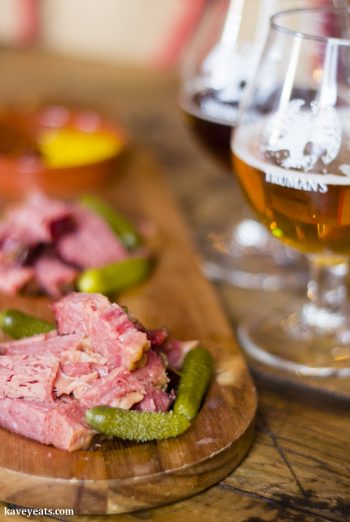 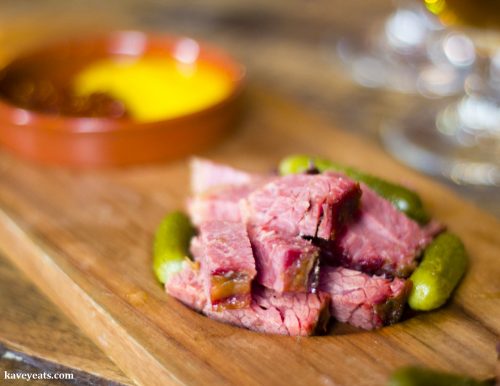 I often find salt beef either bland or far too salty, but I love the Sliced salt beef on board served with gherkins, mustard and tomato relish (£8); soft and tender meat with a lovely flavour, this is absolutely perfect to munch on over a few drinks.

If you fancy a lighter meal, you could order the Salt beef bagel served with Tyrrell crisps (£6.50), I think it’d be perfect for a quick weekday lunch. 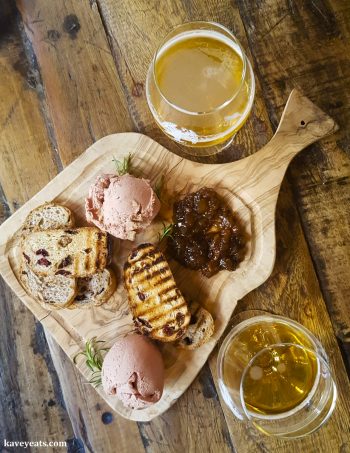 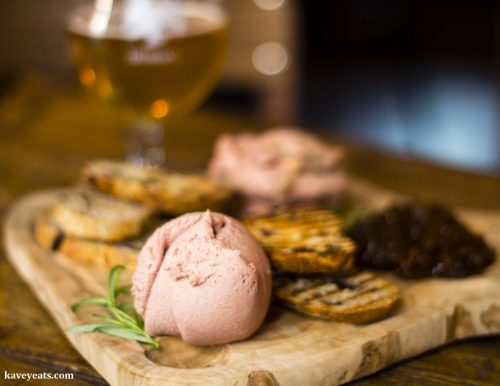 Our other starter is the Chicken liver terrine and pork apple with calvados pate terrine served with rustic bread (£8.50), another huge dish.The terrine is delicious, soft and smooth and lovely on the different breads served alongside. A delicious chutney too!

The other starter we were tempted by was the Smoked Salmon Carpaccio board (£9.50), which would no doubt be as generous a portion as the two we try. 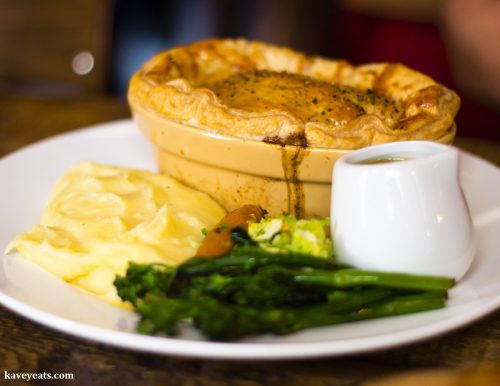 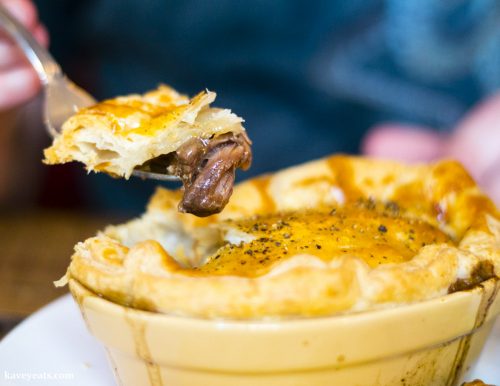 Since the menu is all about pies, we have to order the Steak and Truman’s Runner Ale Pie (£14), made using Truman’s best bitter which contains five different malts for flavour. This pie is fantastic! Though some pie fanatics may be upset by the pastry being a lid only, I think it provides the perfect ratio of pastry to filling. The filling is generous, more soft tender beef, in a rich sauce, there is nothing to fault about the tastes and textures of this pie!

All three pies on the menu are served with creamy buttery mashed potato, seasonal vegetables and gravy, a nice touch to provide extra gravy for the veg. 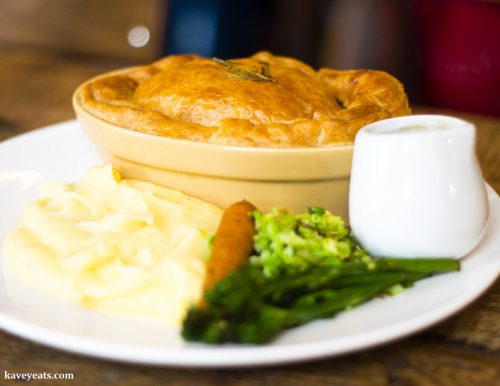 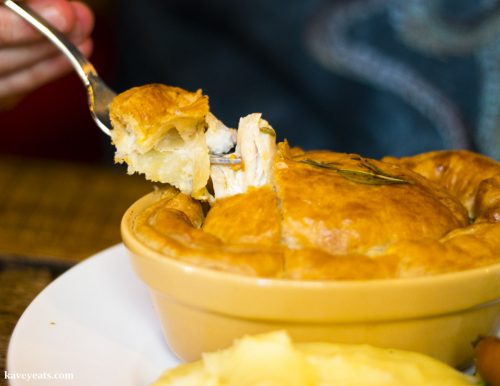 The Chicken and mushroom pie (£13) is every bit as delicious as the steak one, even more impressive given that chicken, even in a sauce, can so readily be dry and stringy. Here, moist chicken combines with mushrooms in a lovely creamy sauce. It’s hard to pick a favourite between the two pies, so it’s just as well Pete and I share them half and half!

The third pie on the list, for those wondering, is a veggie Ratatouille Pot Pie (£13), which we didn’t try. 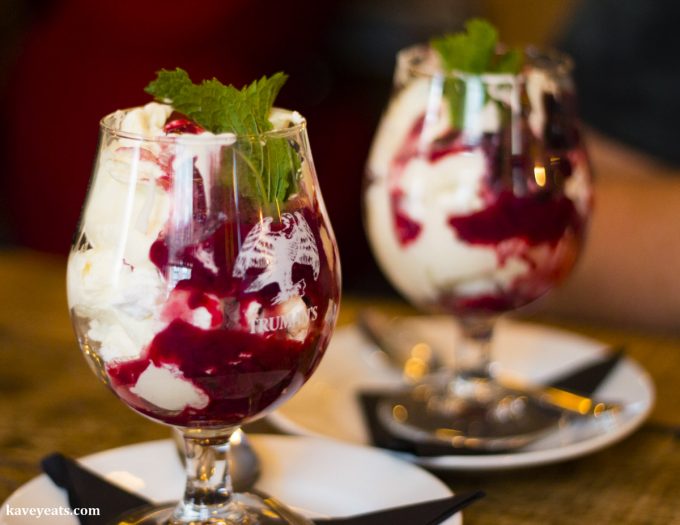 Full to bursting, we order a single Eton Mess (£6) to share, but by way of apology for a kitchen delay, we are served one each. Although it’s not a classic version, I rather like the strawberry compote (in lieu of fresh) combined with crunchy meringue and whipped cream.

By the time we finish, I can hardly move, let alone make it back down the stairs to the bar!

A lovely extra offered by the new brew tap is use of their crowler machine, a clever gadget that allows them to fill an unsealed can with beer straight from the tap, and quickly seal it for the customer to take home. If you want to buy ‘one for the road’, this is how to do it in style! It needs to be drunk within a couple of days to be at its best, but solves the issue of carrying around a heavy glass growler (bottle), to pubs who sell beer to take away. 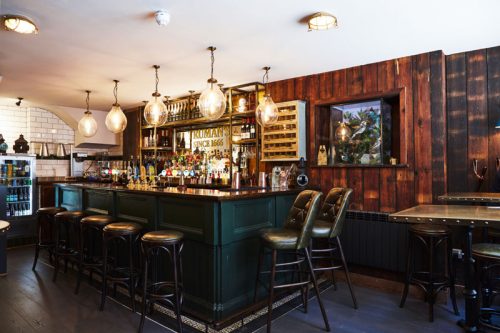 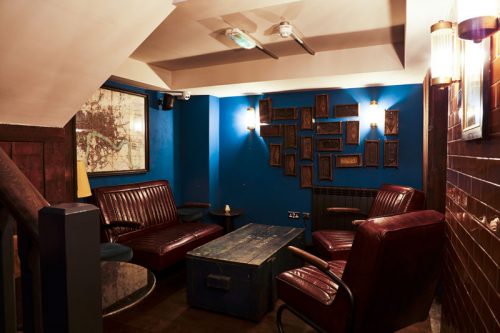 As well as the bar area on the ground floor and the dining room upstairs, there’s also a new basement area offering a snug-like den with comfy sofas.

I was a little nervous to visit the Newman Arms again, so enthusiastic were my memories of the menu I’d last eaten there under the aegis of the Cornwall Project. But I think Black Eagle Brewery have made a clever decision to take the menu back to a more classic London pub offering, allowing them to focus on the beer downstairs, and getting the classics exactly right in the kitchen above. 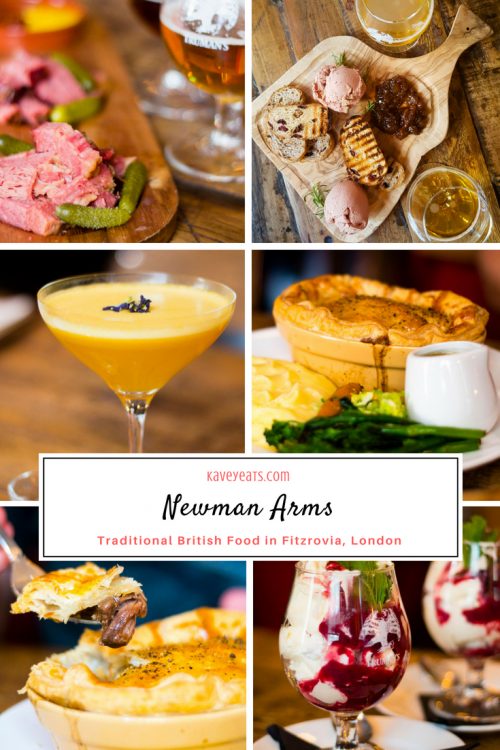 Kavey Eats visited as guests of Newman Arms for the purpose of this review.

Please leave a comment - I love hearing from you!10 Comments to "Truman Beers’ Newman Arms"