“It’s an irritating reality that many places and events defy description. Angkor Wat and Machu Picchu, for instance, seem to demand silence, like a love affair you can never talk about. For a while after, you fumble for words, trying vainly to assemble a private narrative, an explanation, a comfortable way to frame where you’ve been and what’s happened. In the end, you’re just happy you were there- with your eyes open- and lived to see it.” ~ Anthony Bourdain

One of my strongest childhood travel memories is our family trip to Peru in 1987, during which I visited Machu Picchu for the first time. By some wonderful chance of fate, tourism to the magnificent site was almost non-existent when we were there, so we shared the extensive site with what felt like only a scattering of fellow tourists. We stayed at the small and simple Hotel Turista (long since replaced with a luxury lodge and huge tourist restaurant), at the top of the winding switchback road up to Machu Picchu, just a few short paces to the ruins themselves. Aged 15, I was thrilled to be allowed to explore on my own, clambering around the site with my precious SLR camera.

I loved picturing in my mind the city as it must have been in its heyday, after it was constructed as an estate for Pachacuti, the Inca emperor from 1438 to 1472. It’s hard to imagine the sheer scale of effort needed to build this mountain-top city, deep in the mountains and forest.

Historians believe it was abandoned only a century or so after it was built – the Spanish conquest in 1532 introduced Smallpox which killed huge numbers of the native population, and although there’s no evidence that the conquistadors ever discovered Peru, the disease may still have reached it via travelling Inca.

One day, I must try and find the film negatives from that trip!

My second trip to Machu Picchu was in 2005 – I wanted Pete to see the beautiful sites of Peru. Our main trip was a wildlife-focused one to the Galapagos, but it’s such a long way from London to anywhere in South America that it made total sense to add Peru to the itinerary – that’s my excuse and I’m sticking to it!

I was worried that Machu Picchu might not live up to my memories, not least because the volume of tourists would be so very much higher. Certainly, on a visual level, a little of the magic of the site was diminished by all the people, tricky to exclude from photographs taken from most of the key viewpoints, not to mention the pedestrian traffic jams when traversing popular pathways and stairs. But I still found the site breathtaking, and loved being able to share it with Pete.

Angkor Wat is still on my ever-growing wishlist, as are many of the world’s most amazing places… the Great Wall of China, Chichen Itza, and so many more.

Which place does this quote put in mind for you, and which places do you still dream of visiting? 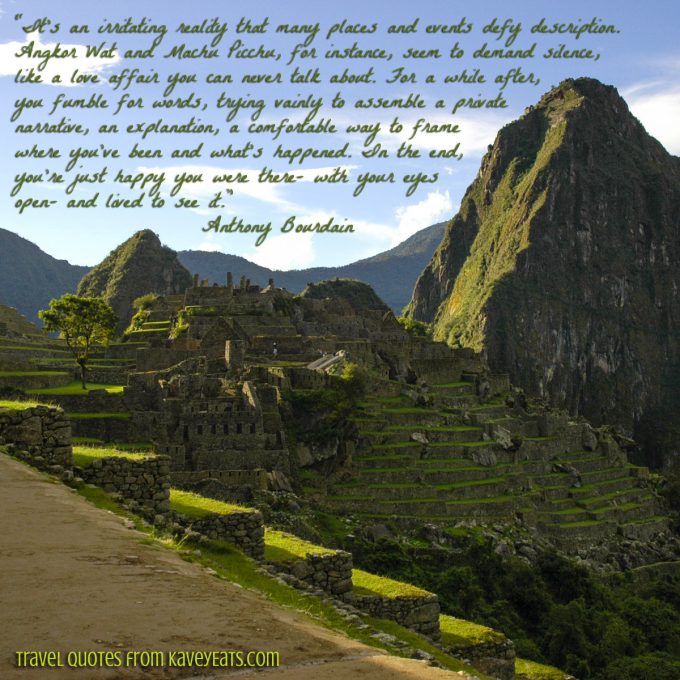 This photo was taken on our 2005 trip to Peru, in the first few years after I switched from my film SLR to a digital one, making it far easier for me to find and browse through my photos from the trip and choose one to share!

Please leave a comment - I love hearing from you!36 Comments to "Travel Quote Tuesday | Machu Picchu"