On a metaphorical level, Buddha is not referring (in this quote) to travel in a physical sense; he is speaking of one’s path through life and reminding us that how we live our lives is key.

But there are certainly those who take this missive on a literal level too… those with the strongest wanderlust in their souls, always on the move, from one place to another to another. The length of time they pause in any given place might be longer or shorter, but there is the firm knowledge that eventually they will move on once again. For these nomadic travellers, there is no end destination, the travelling itself is the be all and end all. Sometimes I dream of joining them, but I know in my heart that I would miss the family and friends that anchor me to London.

For those of us who take trips that punctuate the daily life we live at home – trips with a distinct start and end – travel is altogether a different thing.

For me, the transfer from one place to the other is often the most tedious part of the trip – certainly for international trips involving the stress of getting to the airport, passing through security, killing time in departure (especially if there are delays), sitting through the discomfort of a long flight and all the rest of it. I don’t detest it as much as some do but if I had a Star Trek-style instant transporter device, I’d be the happiest girl ever!

Occasionally the travel itself is part of the joy.

The first time we visited Namibia I had been at work in an office all day, sped to the airport on the Tube in rush hour, taken an overnight flight to Cape Town, and then two connecting ones (via Botswana) to reach Windhoek and even the thought of getting on another plane was making me petulant.

But we climbed into the tiny four-seater Cessna and when it took flight above the incredible landscapes of Namibia, I can’t find words to tell you how my spirits soared with the plane and all the exhaustion of the long, long trip fell away. The sky was a glorious shade of blue and the ground below ranged from vivid yellows through oranges to deep red. Occasional clouds cast shadows onto the earth, that our shadow plane flew in and out of. As we approached the Namib desert, blonde grass covered red dunes freckled with tiny circles of red sand where the grass didn’t grow – Fairy Circles as we later learnt. And finally we came, elatedly, to land for our stay in Wolwedans.

In Japan, it’s the bullet trains that I get excited about though I enjoy taking any and all trains there, from short hops on local commuter routes to longer races across the country from one fabulous destination to another. It’s not only the sleek appearance of the bullet trains, or the wonderful efficiency and lack of delays (nothing short of a miracle to a Londoner!) but all the fascinating differences to using trains at home – the quirky design details within the trains (such as the foot levers that allow each pairs of seats to be swung around to face in the opposite direction), the often incomprehensible Japanese advertising posters, the fact that each station has a unique musical jingle that is played as the train comes in to that station, and even the way conductors bow to the passengers as they enter each carriage and again as they leave it. 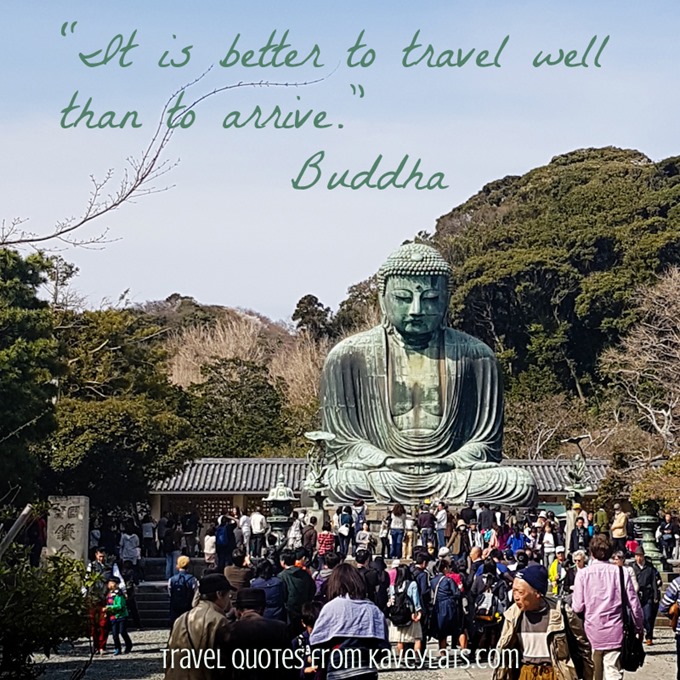 On our last trip to Japan, we started our month with a two night stay in Yokohama from where we took a day trip to Kamakura to see the giant Buddha statue. It was a lovely day, not only for the sights we saw and the delicious food we enjoyed, but because we spent it with a friend I had made online many years before, and who we had met with on each of our previous trips to Japan. Oh, and the cherry blossom trees were in full bloom too!

Please leave a comment - I love hearing from you!26 Comments to "Travel Quote Tuesday | Buddha"