It’s making me a little antsy to realise that it’s been a good few years since our last safaris to Kenya and Tanzania, and even longer since we visited Botswana, another of our favourite safari destinations.

There’s something so utterly compelling about visiting a place full of wildlife and flora, observing birds and animals up close in their habitats… The sheer beauty and wonder and excitement of the natural world is utterly thrilling.

A friend once said to me in all seriousness that he couldn’t see the attraction of going on more than one safari in his life because, “once you’ve seen the backside of one elephant, haven’t you seen them all?” I was flabbergasted, thinking immediately of an afternoon in Kenya during which we spent hours watching a single herd of elephants… observing their gentle interactions with each other, seeing the family dynamics at play, watching them feeding, resting, playing with each other, even grumping around… and it was a wrench to have to leave when it was time to return to camp at end of the day. It was an unexpected encounter; we saw the large herd moving slowly in the distance and our guide, keen to ensure we didn’t disturb them or discourage them from their path, turned off the engine and we sat quietly watching from afar. To our surprise, the herd turned off its path and slowly plodded towards us, perhaps they wanted to watch us just as much as we wanted to watch them? And so we ended up right in their midst, and we stayed there together for the rest of the afternoon.

People often talk about the African Big Five – Lion, Elephant, Buffalo, Rhino and Leopard – and seeing these animals is always a huge pleasure. But the term was coined by big-game hunters, grouping together those animals hardest to hunt on foot. For me, there are so many other animals that are just as wonderful to see…

The lithe gracefulness of Cheetahs, watching their spotted coats ripple as they stalk through the grass and marvelling at their muscles when they burst into a full speed chase, or being utterly charmed by the spiky haired fluff of cheetah cubs… the cheerful antics of a herd of Zebra or Giraffe, noisy and boisterous and impossible to watch without laughing… or the myriad beautiful birds from tiny Little Bee Eaters, snuggled together on a branch to the ungainly comedy walk of Saddle Billed Storks… the heart-warming family bonds of the much maligned Hyena and the sadly endangered Wild Dog, especially if you are lucky enough to see them at a den site or see the adults work together on a hunt… the fabulous fat waddle of Hippotamuses on land, or just their nostrils, eyes and ears showing above the water line as they cool themselves from the hot sun… And I particularly love the thrill of seeing smaller animals; they are often so much harder to spot… porcupines, jackals, bat-eared foxes, dik-dik, servals and caracals, bush babies… and all manner of rodents, lizards, insects and snakes. 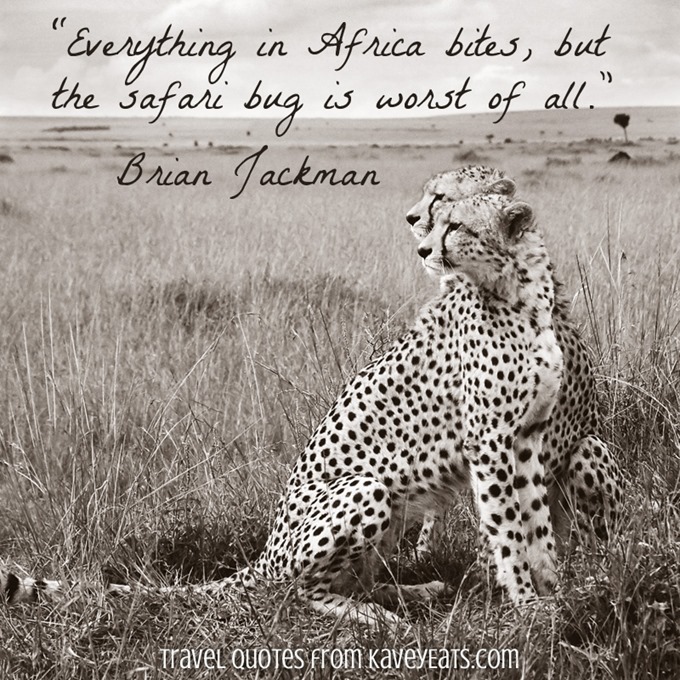 These two cheetah brothers living in Kenya’s Masai Mara often took up mirrored poses when they paused to rest or to look around. Once grown, male brothers often stay together and will also form coalitions with other unrelated males. Females tend to be solitary unless they still have young offspring with them.