The Brahmanas are a collection of ancient Hindu theological texts. They incorporate Hindu myths and legends, explanations and instructions about Vedic mantras and rituals, and commentaries of a more philosophical nature. Veda is the Sanskrit word for Knowledge, and the Vedic texts are the focus of religious instruction and study. There are different schools of Vedic study focusing on different aspects of the four Vedas, each with its own Brahmana texts. The Aitareya Brahmana is claimed by scholars to date from 800 BCE to 500 BCE.

Although two to three millennia is nothing in the lifespan of mankind, I am still amazed to find within such ancient texts a statement that resonates so strongly with modern day life and feelings.

Of course, there are many paths to happiness and I would never be so prescriptive as to suggest that travel is the only one. And yet… as one who loves travel immensely, I can’t help but identify with the statement. 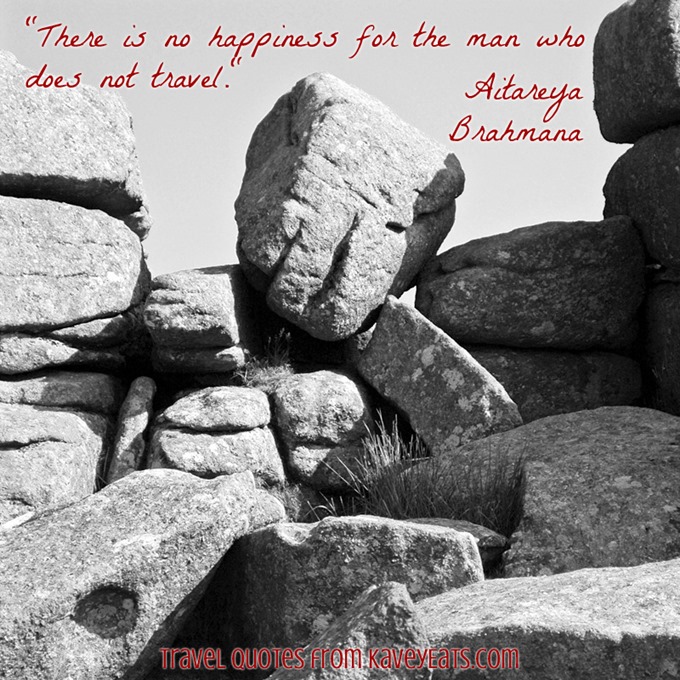 This is one of my film-days photographs, taken somewhere in the UK, somewhere ‘up North’ I think or possible one of the moors in the South West? If you know where it is, I’d love to be reminded.

I have always anthropomorphised these rock formations, seeing in the shapes and shadows a thinker leaning his head on his arm.

Please leave a comment - I love hearing from you!36 Comments to "Travel Quote Tuesday | Aitareya Brahmana"