Back in 1994, when we got married, fondue sets were considered rather twee. But I wanted one anyway and lo and behold, we received one amongst our wedding presents. For the first few years, we used it regularly (by which I mean once every few months, not weekly). But over time, both cheese and chocolate fondues became less frequent. These days, with our lack of dining table, they are positively rare.

My favourite chocolate fondue recipe back then was made with Toblerone and Tia Maria with a touch of cream.

At a recent gathering of friends (for the Great Alcoholic Ginger Beer Taste Test), I decided it was time to revive this nostalgic dessert, though I was duly nervous about what the gang of dedicated food lovers would make of it – a chocolate fondue with no Valrhona, Amedei or Amano in sight! To my delight, everyone seemed to love it and there were heated fork battles and daring rescues of lost dippers! 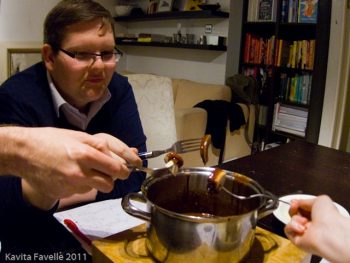 Toblerone was created in Switzerland in 1908 by Theodor Tobler and Emil Baumann. With it’s nougat, almond and honey ingredients list, the name is believed to be a portmanteau of Tobler and the Italian for nougat, torrone.

For me, it’s the added texture from the tiny chewy crunchy nougat bits that particularly appeals. The sweet coffee vanilla flavour of the Tia Maria complements the chocolate perfectly.

Don’t ignore the recommendation for chunks of crusty white bread as one of your dippers, they soak up the chocolate beautifully and work incredibly well, alongside fresh fruit. On this occasion I served bread, bananas and apples to dip. 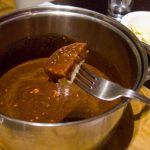 Note: Amounts of cream and Tia Maria are approximate as I poured directly from the containers into the pan. 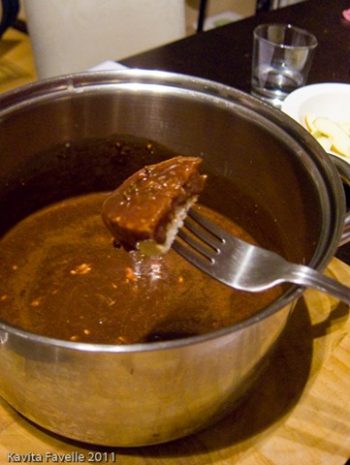 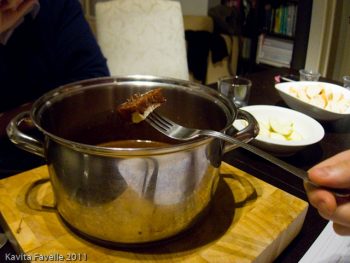 Note: We didn’t have a fondue set nor under-pan heater but I made the fondue in a heavy based pan which would retain the heat and we placed it on a thick wooden chopping board. It remained liquid for ages and had it started to solidify, I would simply have given it another few minutes on the stove again.