Recently, I reviewed Tim Anderson’s Vegan Japaneasy. Now I want to tell you about his previous title, Japaneasy. Stylistically – in voice and in approach – both cookbooks are stamped with the humour, personality, skill and enthusiasm of their author, so I’ll avoid duplicating my own equally enthusiastic approval of all four traits (warning: probably a lie). 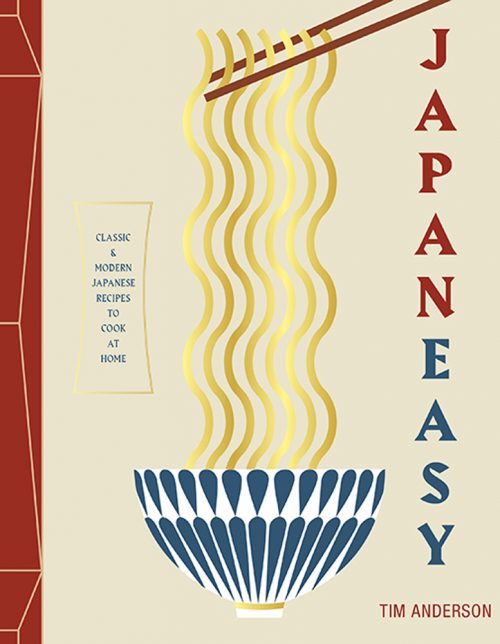 Japanese food has a bizarre reputation in Britain for being, oh I don’t know … extreme? difficult? odd? The common reaction in this country was summed up for me on ITV News near the start of the Covid-19 epidemic when the son of cruise-ship patients David and Sally quarantined in a Japanese facility said “neither of them can eat the food”.

I on the other hand had scarcely arrived back in the country from Japan in December when I started exploring options for Japanese cookbooks to extend my collection (which only comprised Everyday Harumi – the equivalent of owning a basic Delia Smith cookbook). 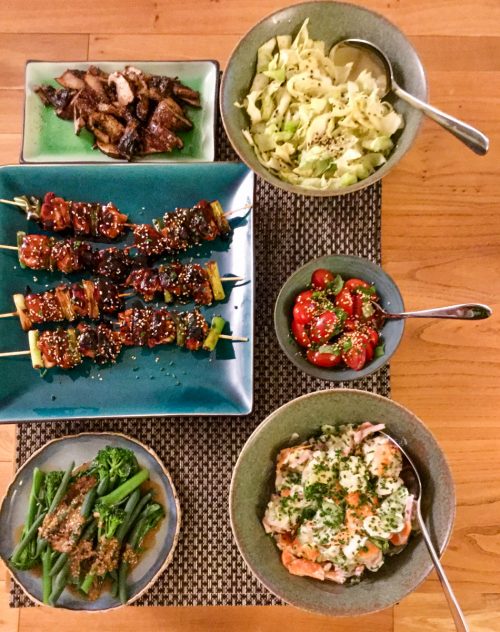 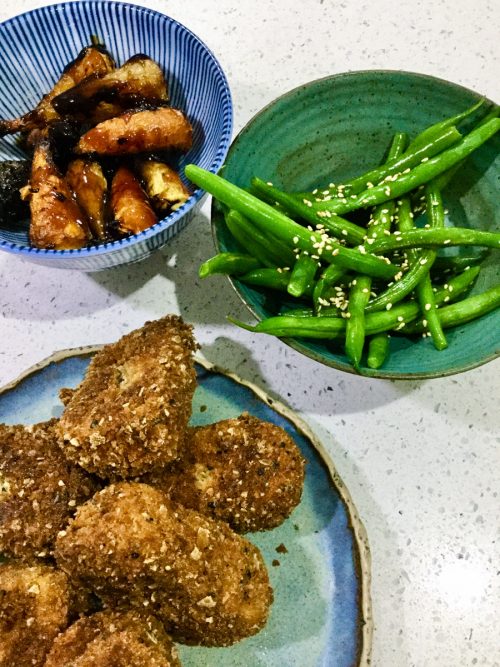 The problem is, it all looks so intricate, fiddly, beautiful, perfect, daunting. When faced with this, it’s fascinating how seductive the word “Easy” can be. “Japaneasy”.

I remembered Tim Anderson from long-ago Masterchef: his soft Wisconsin accent and expansive grin, his intense appreciation of Japanese flavours and techniques, and the quirky cooking he fed John, Gregg and the various guests. I remembered bouncing with joy when he won. This was a win that cemented the changing face of British cooking, the appreciation for and absorption of other cultures’ food that was becoming our new normal, just the year before London 2012.

So: Tim’s name on a book and the word Easy (not just an adjunct to the title but embedded right in it) = win, surely? I had the nerve to contact Tim through Instagram before buying Japaneasy. Busy with another cookbook, running his own restaurant (Nanban), bringing up a toddler, surely he’d have time to reply to a stranger, jeez what was I thinking? But yes, he did respond warmly and kindly to my questions around adapting to a coeliac diet. 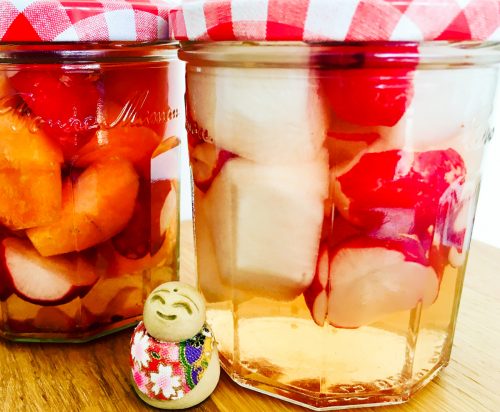 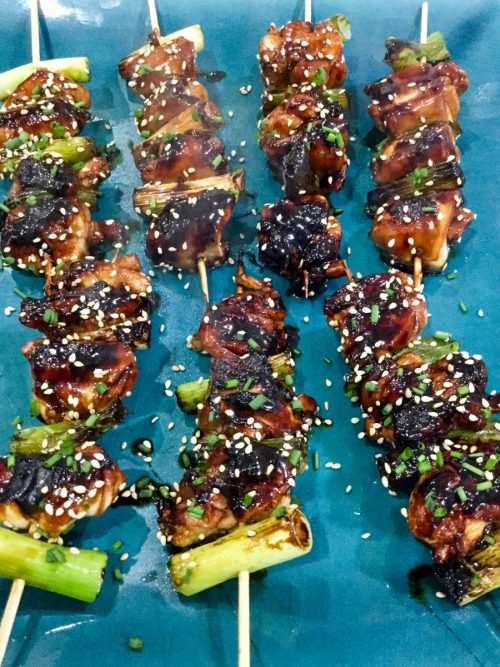 This book is funny, kind and very much the level of a “trained monkey” (his words, not mine) for which I am immensely grateful. It starts with reassurance about ingredients (the basics and the “might wants”) and speed so that the reader quickly starts to get a sense that Japanese food is actually achievable. How to put a meal together is then reflected in the chapters that follow, so that you can easily pick and choose the right recipes.

And no fancy-pants photography either – the sparkling food, a napkin, a bit of cutlery and a couple of pieces of envy-inducing Japanese crockery sums up each beautiful photo. And (as with Vegan Japanese) you can read the difficulty level description for each dish but for the wit and variety rather than any knowledge gained – they’re all easy (“the only difficult part is rolling away from the table after you’ve eaten as much as a trainee sumo wrestler”!)

The Index is workmanlike and usable, though – a minor grouse – I’d have liked to have seen the Japanese terms for the dishes in there e.g. doraki. 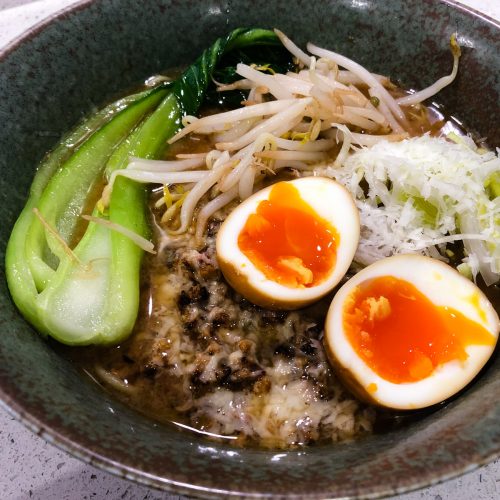 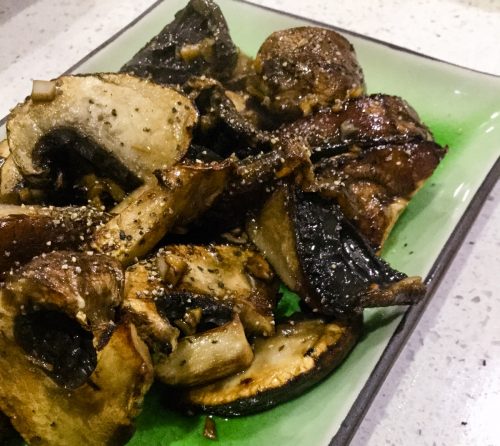 I started by tagging recipes for future use but I’ll admit that I got completely sidetracked and (since I had the ingredients in the house) immediately chose a handful to make. I pulled together a few dishes with complete ease. As well as the ubiquitous rice I knocked up: Simmered Green Vegetables with Sesame Dressing; Japanese Potato Salad; Cabbage with Sweet Ginger Vinegar; Tomato Salad with Spicy Ponzu; Pan-Roasted Mushrooms with Soy-Garlic Butter; Chicken Thigh and Spring Onion Yakitori. This was a feast. A couple of sides with some grilled meat or fish and rice would have been sufficient. Frankly, the potato salad (bright, crunchy and fresh) was a light meal in itself. Nevertheless we completely and greedily demolished the lot. I would make every single dish again (and have already made some since). The mushrooms have become a staple and a myriad of mushroom varieties have found their way into the dish.

Next I figured it would be good to turn my hand to a snack I’d eaten and loved from the street stalls of Kurashiki: Sweet Potato and Sesame Croquettes. Completely sublime and so simple I thought I must’ve missed out part of the recipe at one point. I think this is one of my favourite recipes from the book so far. It’s that sweet, savoury, crispy, tangy combo that Japan does so well, encapsulated in one straightforward dish. This with a little dressed salad and I’d lay good money anyone would be happy, even cruise-ship David and Sally. 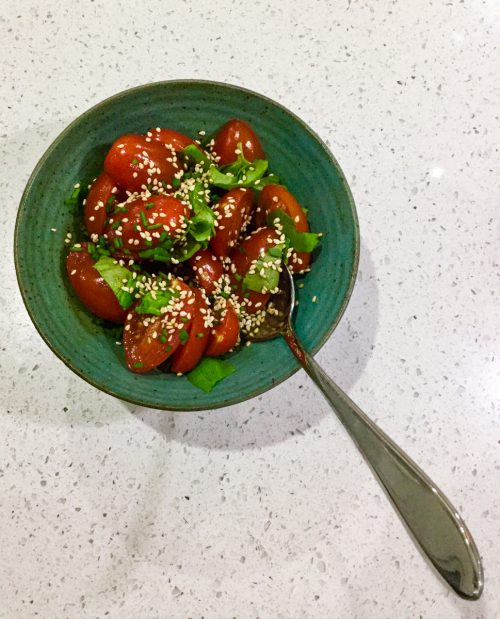 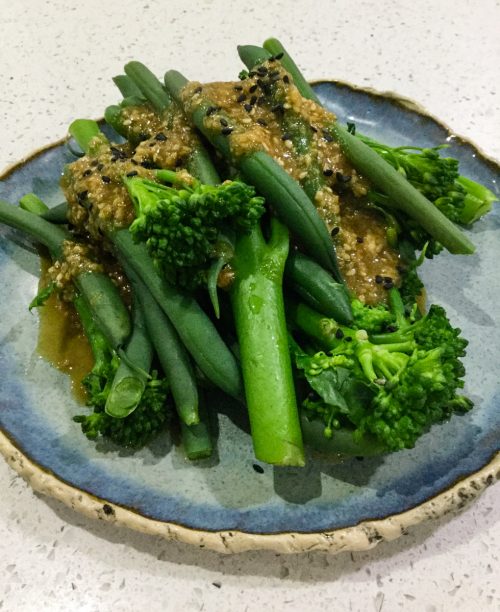 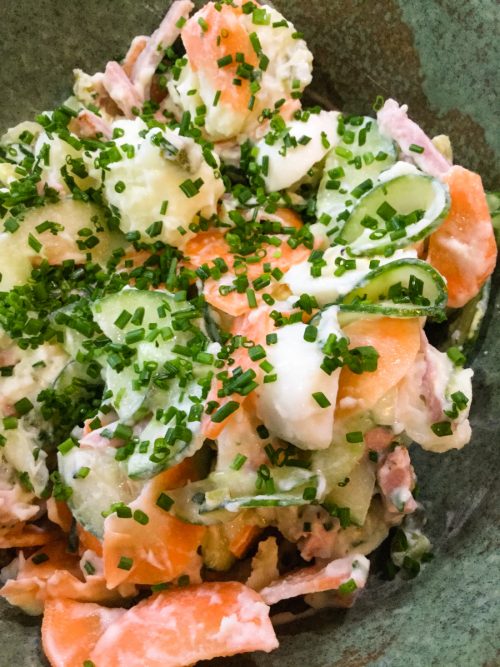 Initially I focused on lots of small dishes so next I tried a classic Japanese Big Dish: ramen. In characteristically lazy style, it had to be Surprisingly Awesome One-Hour Spicy Miso Ramen. I was blown away by this. Despite Tim’s insistence, it was still astonishing that so much flavour could be produced from what’s normally a “low and slow” dish in such a short time. And the recipe typifies Tim’s ethos of pulling the flavour from whatever will easily create the umami (yes, amazingly you’ll find butter, parmesan and anchovies in this bowl of gorgeousness).

Then finally I had a glut of turnips, carrots and radishes (thank you veg box). Japanese Quick Pickles. Phenomenal. They go with almost anything. Make them and thank me later – and Tim, I guess …

Bonus: as a result of tackling all of the above, I now had a slew of other recipes under my belt: Soy Marinated Eggs; Furikake; Sesame Sauce; Tonkatsu Sauce; Ponzu. All of these can be made in quantity so that you can use them for other dishes later.

The recipes themselves are set out much as in Vegan Japaneasy. You get a chatty intro, which is always good value, either for a giggle or for an interesting fact or tip. There’s a short method; Tim has the generosity to make it very clear what you’re trying to achieve and in some cases he capitalises a key point so you don’t miss it! Then finally an ingredients list broken down into the recipe parts, with an occasional cross reference to a page where you’ll find a component part of the recipe (this reminds me to tell you to check up front which sauce and accompaniment recipes you may need before you start any recipe).

Honestly though, Tim is the one you need to thank. Japaneasy could convert cruise-ship David and Sally and I’m pretty sure you will love it. Win.

Kavey Eats was provided with a review copy of Tim Anderson’s Japaneasy from publisher Hardie Grant Books. It is currently available (at time of review) on Amazon UK for £15.99 (RRP £22). Book cover image provided by publishers, all other images by Nicky Bramley.

Please leave a comment - I love hearing from you!16 Comments to "Tim Anderson’s Japaneasy"