It’s amazing how many blog posts I’ve still left to write from our short trip to Dorset at the end of May. I’ve already blogged the foraging course around which the weekend away was arranged, our meal at Hix Oyster & Fish House, another at The Wild Garlic and even shared what we cooked with our foraged bounty.

Still to come are interviews with the lovely owners of Denhay Farm and also with Mat Follas and Terry Ireland (one of the semi-finalists in this year’s Masterchef). Phew! For now, another restaurant review… 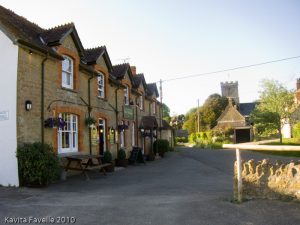 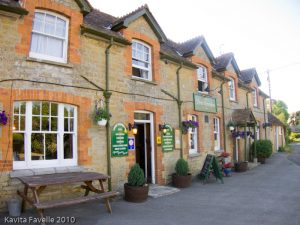 For the third evening meal of our trip we followed local recommendations and headed to Powerstock for a meal in the Three Horseshoes pub.

I’m glad we phoned ahead to reserve a table as it’s pretty small inside and it was a popular place. Much more in demand were the tables outside, but I’m a funny one about eating outdoors unless we’re talking picnics…

I can no longer recall which beer Pete chose, but the fine sunny weather put me in a Pimm’s frame of mind and I ordered my first of the season. Sadly, the barman seemed unfamiliar with this classic – he measured a shot of Pimm’s into a glass and held the glass towards me. “Oh, noo”, I responded, “it needs a lemonade mixer in it, please”. That he managed but when I asked whether they might have any cucumber or strawberries or even a little fresh mint, he looked utterly bemused. I gave up and accepted my somewhat denuded Pimm’s. Sadly, it was also weak and insipid – I’ve since learned that the standard Pimm’s measure is 50 ml, whereas the barman poured only a single spirits measure (which was presumably the standard 25 ml or possibly a slightly larger 35 ml one).

Still, the sun was shining, we were on holiday, the food had been recommended and we were in fine mood regardless. The menu was chalked up above the fireplace – one of those marvellous menus where you struggle to narrow down your choice between all kinds of tempting dishes. 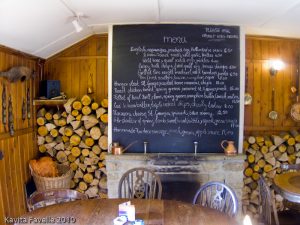 As we were waiting for our starter, we were served some bread and butter. 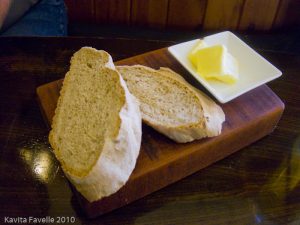 Having had a late lunch (at the end of the foraging course earlier that day) we decided to share a starter of wild boar and quail scotch eggs, pickles (£6). These were good, though they didn’t need the extra sprinkling of sea salt over them, they were strongly salted already. Tasty meat around soft-centred eggs. 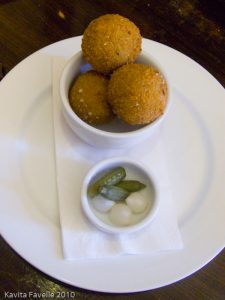 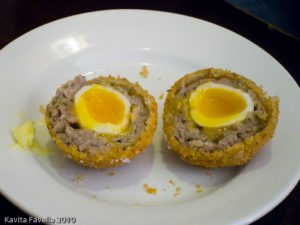 Pete chose the cod in beer batter, triple cooked chips, chunky tartare (£11). A generous portion of crispy battered fish with a simple salad, with the chips hiding beneath the fish. Even more so than the scotch eggs, this dish suffered from over salting mostly in the batter/ fish. 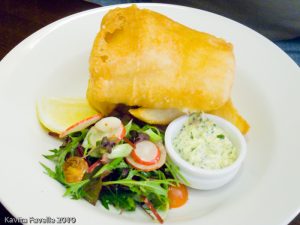 I opted for the hanger steak St George, roasted bone marrows, chips ((£18). Unfortunately, the inside of the bone marrow was fridge cold. I called someone over, explained the problem, and had the whole plate whisked away whilst I was still in the middle of a sentence asking whether they could bring a side-dish to take the marrow away so I could continue eating the rest. Oh well, at least they left my bowl of chips.

Some considerable time later, by which time Pete was virtually finished with his dish, my plate was returned. The steak was beautifully tender and juicy. The mushrooms and sauce full of flavour, the sauce having clearly been reduced down to concentrate it. Sadly, once again, the chef was far too liberal with the salt – so much so that I actually couldn’t eat the sauce and scraped it off the mouthfuls I ate. The bone marrow had been tarted up with breadcrumbs to the extent that all bone marrow flavour was completely lost and all that remained was greasy, crunchy, herby breadcrumbs. You’d be forgiven for thinking the dish a complete failure based on the description so far. But, with the exception of the bone marrow, which really didn’t work, it was so almost there, so nearly a very successful dish, that it actually made me feel sad. More sad than I would have had it been completely rubbish. 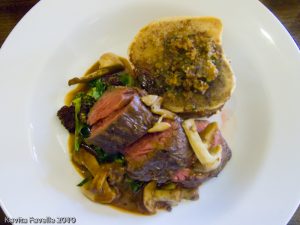 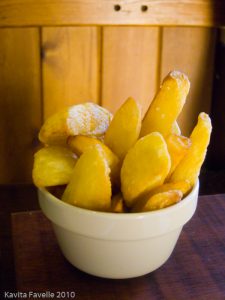 So, the Three Horseshoes pub then – a food lovers destination? Possibly so, as I’m confident the main weakness could so easily be fixed.

The flavours are right, the textures are good, the ingredients are of good quality.

The cooking, in the most part, is accomplished but let down by the very heavy-handed salting – I have no idea whether that’s the result of a jaded palate (which I doubt given the excellence of flavours) or failing to taste before seasoning. It’s doesn’t help that there seems to be an attachment to throwing an extra large pinch of sea salt over every finished dish as some kind of garnish, though the over-salting is more integrated than that – the scotch egg meat, the batter and fish, the herby bone marrow mix and the steak sauce… all were too salty and significantly so.

But service is warm and friendly, the location and feel of the place is attractive and the menu certainly appealing. I would be happy to visit again and see whether the chef is indeed worth his salt.

Please leave a comment - I love hearing from you!13 Comments to "The Three Horseshoes, Powerstock, Dorset"