Selin Kiazim had an unusual and admirable ambition in mind when writing her enigmatically titled cookbook, Three. She wanted to give an accomplished eater and competent “recipe cook” the tools to have the confidence to play with their cooking, to drop their reliance on the stricture of recipes and feel free to create. 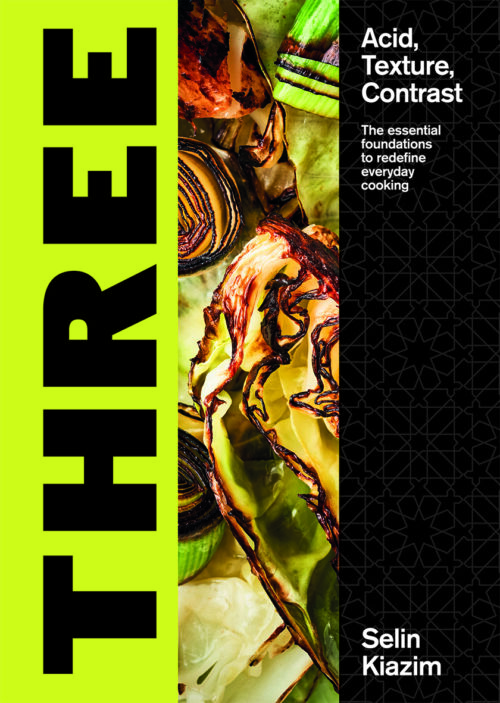 The secret, she reckons, lies in her three chosen building blocks – acid, texture and contrast – which form the structure of this book (the clever cover is divided into three using contrasting textures and patterns). Unlike Samin Nosrat’s (rightly) acclaimed Salt, Fat, Acid, Heat, which also aims to give you a toolset to be a kitchen innovator, Three doesn’t have a scientific explanatorium (yes, I invented that word) consuming half of the book. Instead, in part One, a half dozen pages of explanation on Know-How cover Sourcing, Tasting, Herbs, Oils, Vinegars and Salts; then a dozen pages of Foundations cover the three core principles of Acid, Texture and Contrast, what they add and how to use them, then how to bring them together. It’s an easy read, undaunting and concise.

The recipes that follow in part Three then, are essentially no more than a permission to experiment. As proof of that, in trialling Selin’s book I made my choices from the Recipes section. They led me to layer/combine multiple makes from part Two, the Ideas & Inspirations section, creating alongside Selin with her hand on the tiller. I then used those same components in different ways to create my own variations on a theme, sailing off towards my own horizon, as well as using a couple of Selin’s simpler standalone creations to explore her concept.

The voyage wasn’t entirely without its bumps, even though I think this acid/ texture/ contrast stuff is what I’m good at. 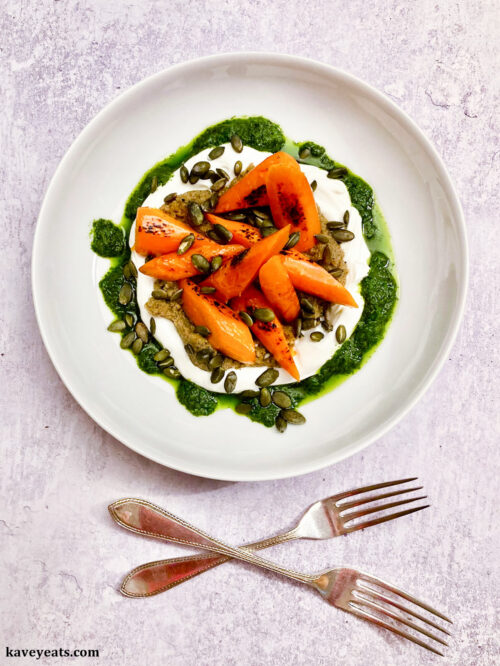 I started with Carrots, Charred Onion, Basil and Pumpkin Seeds. This is a regular approach that Selin takes: a few recipes in one, none onerous on their own but together demonstrating the building of acid, texture and contrast to create an interesting dish that also looks restaurant-worthy. I made the sweet Vegetable Glaze, the Basil Oil and the Toasted Seeds from part Two. I simmered some super-sweet organic carrots from my farmshop in my glaze, then charred farmshop onions and blended them with oil and vinegar. I layered the whole shebang with some whipped yoghurt and it looked picture-pretty. But gallingly, it was too sweet, almost puddingy. The whole dish lacked acidity. Aaaand this was when I learned the lesson Selin had been emphasising from the start – taste, taste, taste and trust your instincts, don’t slavishly follow the recipe. Texture was great, the contrast of cool yoghurt and warm carrots ticked the box, but my exceptionally sweet raw ingredients, the carrots and onions, needed more vinegar and salt to balance the sugar – and really truly, I should have known this.

You’d maybe think that a less than satisfying end result would be off-putting but strangely, armed with my revelation that instinct trumps the rules, I felt more confident in undertaking the other recipes I’d picked. 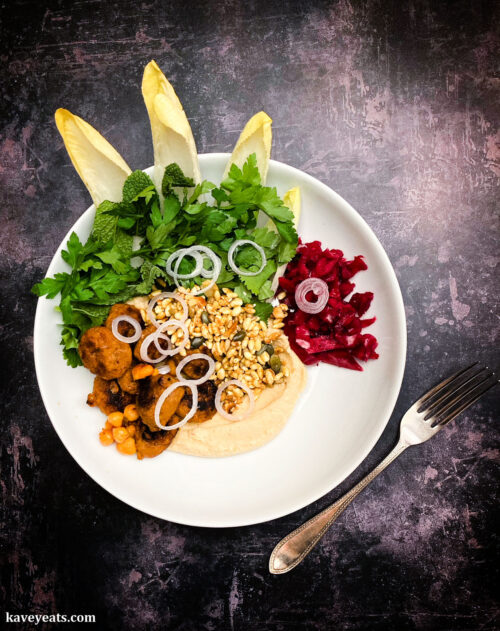 Pickles, Hummus, Garlic Sausage and Granola next. *sotto voce* I haven’t ever thought hummus is all that. It’s a bit meh isn’t it? I’ve made my own a few times, eaten the shop-bought luxury versions unenthusiastically, always seen it as a bit of a nothing dish. And Selin’s recipe makes a lot of the stuff … A Lot. But as the saying goes, being able to change your mind is the best way to find out you still have one. Selin’s recipe resulted in a silky, savoury, rich, nutty, tangy and slightly bitter slick of lusciousness (tempered to my own tastes, go me!). It was an impeccable foil for the crunchy fragrance of the spice-roasted puffed rice and seed savoury granola. Add to that the oiled paprika-spiked unctuousness of the quality merguez sozzies I’d unearthed from the freezer and some sweet-sharp pickled red cabbage and this was a heavenly meal, scooped with hot pittas into ravenous mouths.

I must tell you here about Selin’s use of the recipe header and footnotes. Here she relays literally dozens (hundreds?) of variations on her recipes. In effect, they are examples of how to riff on a theme and an attempt to inspire the inner creative in you to set itself free to fool around with food. Game on!

So the next day I spooned out a dish of that wildly addictive hummus, topped it with warmed slivers of slow-cooked roasted lamb shoulder, harissa-swirled yoghurt, toasted pumpkin and pomegranate seeds for crunch and acid, then slicked it with extra virgin olive oil and sprinkled with Maldon salt. I’m going to blow my own trumpet, it was a triumph. Lovely, lovely hummus (I’m a convert, yes) featured in various ways in a couple more meals that week, each using Selin’s approach. p.s. I love hummus.

I do think you need to be reasonably technically confident to follow along with Selin’s multi-part recipes. They’re not geared to the totally novice cook (as she makes clear in her intro) and you’ll be interpreting a little as you go along – not a bad thing if you’re prepared for it, as it does inspire self-reliance which in turn encourages experimentation. 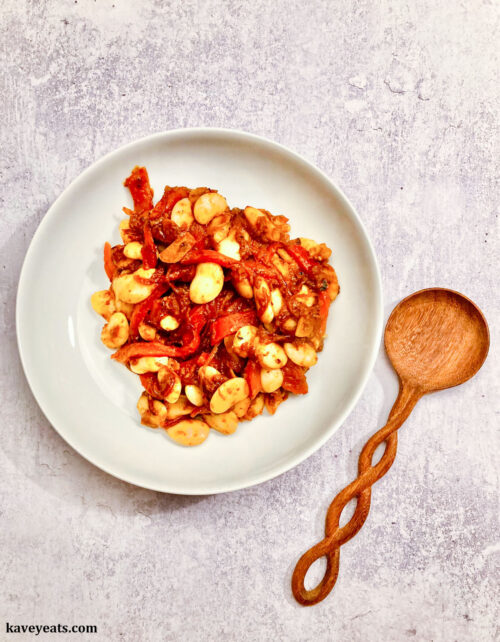 However Butter Beans, Paprika and Piquillo Peppers is one of the simpler choices in part Three. It’s standaone, not reliant on any part Two components. This is a quick and simple store-cupboard dish; tartly refreshing, yet warming and soothing from the spices and butter beans. It’s also the canvas for more exploration, daubed with whipped yoghurt for crusty-bread dipping purposes or cooled then stirred through leaves, herbs and vinaigrette. 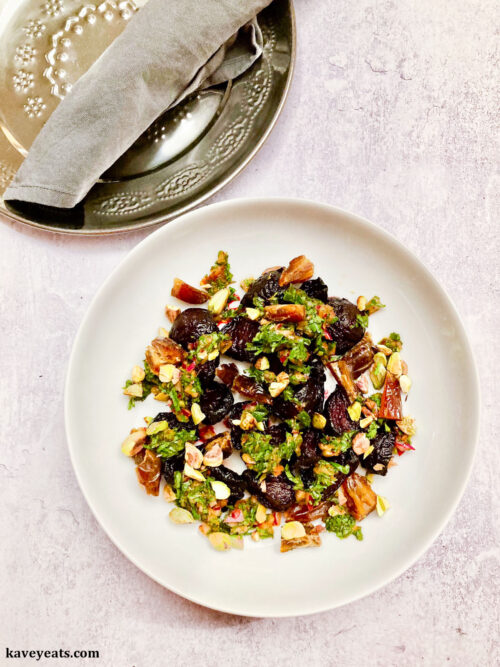 Chermoula Beets, Dates and Pistachios is another self contained recipe. Earthy, fudgy-textured roasted beets are dressed with a vivid herbed chermoula, then adorned with contrasting slivers of dates and crisply-toasted pistachios. I upped the lemon and vinegar to my preferences, revelling in my autonomy. 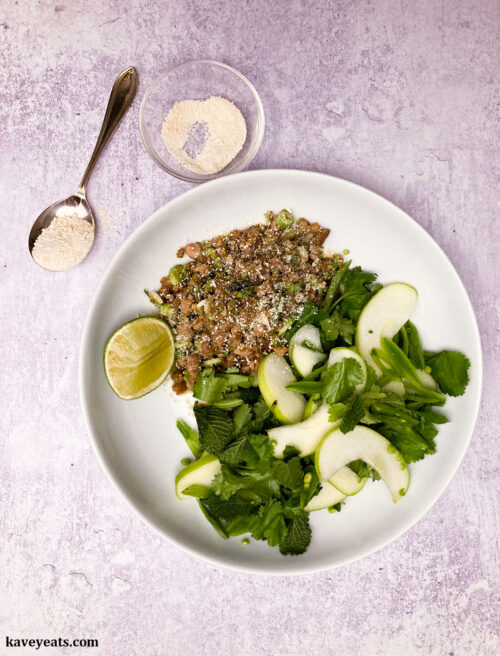 Finally from Selin’s recipes, Pork Laab, Sugar Snaps and Apple. I’m a big fan of laab, always on the look out for authentic Thai recipes (David Thompson’s are particularly excellent, often wickedly funky) and I also enthusiastically embraced this off-piste interpretation. Again, Selin isn’t trying to show you how to make a classic, she’s demonstrating how playing with textures, contrasts and acids in various forms can magic up a plate of food that has you literally licking the plate – as I admit I did.

The recipes in part Three cover: Fruit; All Things Green; Nuts; Seafood; Nightshades & Mushrooms; Brassicas; Alliums; Beans, Grains & Pulses; Poultry Meat; Roots & Tubers. The majority are vegetarian or vegan, showcasing produce that’s inexpensive and mostly using limited meat/ fish, so encouraging you to buy the finest you can afford. If you have a particular core ingredient available the decent Index is a fine resource to find a purpose for it, leading to multiple adaptations so you can target what’s in your kitchen to create your own dish.

I’m by nature an experimenter – when I first get a cookbook I’m happy to follow a recipe to the letter but will usually play about with it later to satisfy my curiosity. This book gave me a sense of how to channel that curiosity in a more targeted and considered way, which I loved about it. If you’re willing to deploy a bit of intuition and inspiration, and get playful in the kitchen, Three gives you a host of springboard recipes and ideas to enable that, accompanied by restaurant-pretty photos to set your tastebuds tingling.

Recipes From Three by Selin Kiazim

We are delighted to share these two recipes from the book, with permission from publisher Quadrille.

Please leave a comment - I love hearing from you!2 Comments to "Three by Selin Kiazim"