Ghillie Başan is a food anthropologist, and food and travel writer with a large back catalogue of cookbooks (one of which – Mezze – I already own, and The Lebanese Cookbook which we reviewed on Kavey Eats earlier in the year). Başan’s books are primarily focussed around the Middle East and Turkey though Indonesia, Cambodia, Vietnam and Singapore also make an appearance.

There’s much to like about The Turkish Cookbook, not least the fact that this chunky beast racks up 93 pages before the recipes proper even begin – a brief pelt though culinary history and traditions, celebrations and cooking practices gives a sense of the centring of the Turkish home around food and the importance of it to the country’s culture. That’s followed by a wonderfully comprehensive section on ingredients, a cook’s tour of the heart of a cuisine rooted in abundance – many of these are familiar to me but the notes on their usage add a real depth to the book. 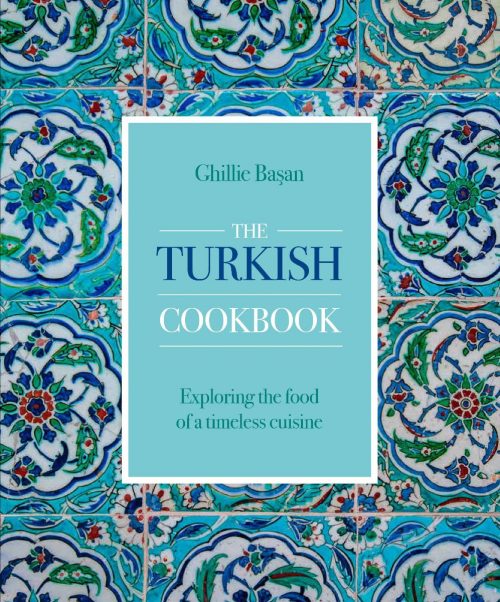 The cover is a visual and tactile joy, feeling and looking like sumptuous, highly decorated Turkish tiles. Photos inside buck the current trend for muted natural flat lay photos, delicately accessorised; instead these are super-saturated close ups, vivid reds, oranges and yellows predominating and flashes of herbs lifting the darker dishes. There’s no stinting on the volume of photos either – most recipes are accompanied by at least one extra photo, many with several. Combined with the silky shine of the paper stock, something we almost never see nowadays, it leaves me with a weird but pleasant sense of culture shock.

Each recipe has an intro section covering how and when the dish might be served, maybe a little about presentation or serving suggestions, and/or thoughts on variations. The recipes also often have a Variations or Cook’s Tip at the end, encouraging you to enjoy the book as a kicking off point to expand your Turkish-based repertoire of dishes.

There’s a decent index, with some recipe and ingredient names also given in Turkish; why not all, I wonder? The recipes have US and UK notation, and the section on nutritional data for every recipe is something I haven’t seen outside of diet-related books, with the whole feel up to this point of a book that’s been heavily invested in.

So far so good, I’m enthusiastically marking up recipes like there’s no tomorrow. Then comes the frustration. This isn’t a cookbook for anyone without decent experience in the kitchen. The recipes don’t appear to have been independently tested and this leads to numerous problems, which gradually make themselves very pointedly felt as I work my way through the dishes I’ve chosen, like feather quills through a cushion. Deep breath, here we go. 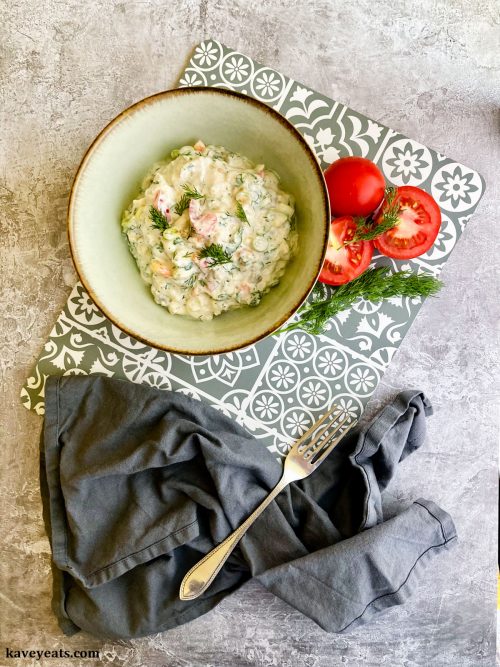 It started well. From the first chapter, Meze and salads, I picked Smoked aubergine and yoghurt puree (patlican ezmesi), including the variation suggested to create patlican salatas (in which I was guessing the quantities of the additional ingredients, and guessing whether or not to include the yoghurt – which I did – but to be fair I wasn’t expecting the variations to be full recipes and was happy to experiment). This is the perfect dish to have on the side with BBQ meats, a smokey mirror for the char of the main and simultaneously a fresh foil for its richness.

Fiery cheese and parsley dip drizzled with a little honey from this chapter will feature in a future meze feast for friends, I think.

From the Soups and hot snacks chapter, Simple eggs with garlic yoghurt (which I’ve seen in cafes described as Turkish Eggs) seemed like an ideal simple brunch choice. I have my own poached eggs recipe but followed Ghillie’s – disastrous frankly (to the point of having no useable photo of the dish). The poaching pan quickly filled with overcooked, cooked and undercooked yolks and swathes of floating snotty whites. The stressful experience resulted in a miserably unattractive dish that tasted deliciously creamy, buttery, spiced and tangy: more than the sum of its parts, dipped with warmed pittas – but next time I’ll resort to my own reliable poaching method.

There are dumplings, laden flatbreads, filo dishes and fritters in this chapter that deserve attention, but a Yoghurt soup with lamb is particularly floating my boat. 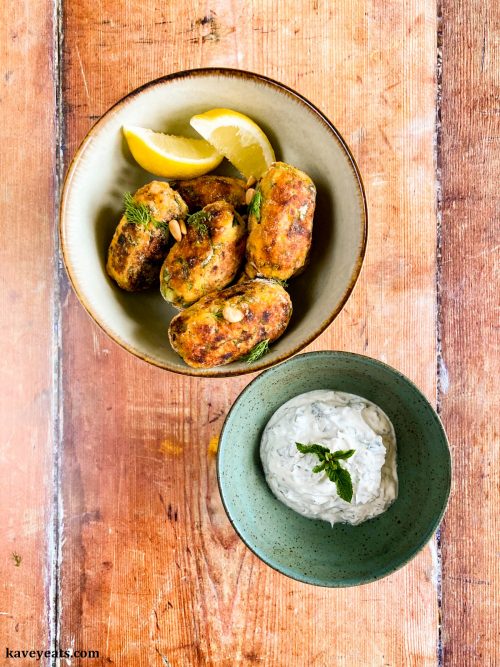 Carrot and apricot rolls with mint yoghurt from the Vegetable dishes chapter fared reasonably well, though a complete lack of clarity over carrot quantity meant that the crispy croquettes ended up almost dessert-sweet. I’d increase the carrot size or reduce the apricots next time. And there will be a next time as these are great little kofte to serve hot as part of a meze spread with more savoury options. I particularly loved the author’s addition of textural and flavour complexity with resinous waxy pine nuts and I appreciate the way that Ghillie often plays around with ideas to level up dishes she’s eaten in Turkey. 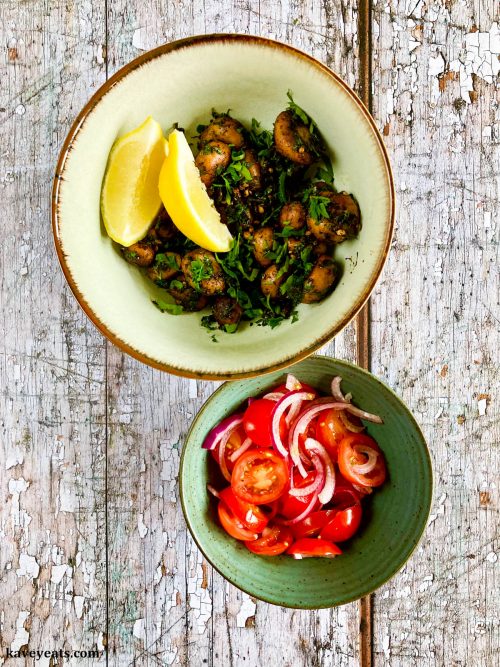 Caramelised mushrooms with allspice and herbs (also from Vegetable dishes) looked nothing like its bright shiny picture, turning into a dark, rich, crustily savoury dish rather than the light bright version I’d expected from the photo. It contrasted well with the sweet carrot and apricot rolls, more by accident than design.

I chose two recipes from Bean, peas, lentils and pilaffs, which both re-emphasised my main caveats with this cookbook. 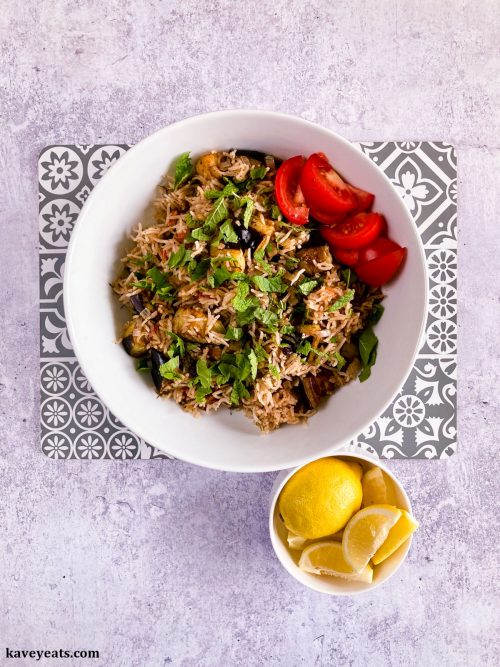 The first was Aubergine pilaff with cinnamon and mint. If you aren’t a reasonably confident cook, be aware that this recipe, like many others, doesn’t give definitive quantities (this applies to a third of the ingredients in this recipe alone) but has ranges that literally in some cases double an individual ingredient. There’s a very big difference in flavour between one and two tablespoons of cinnamon. Secondly, it’s clear the photo, once again, doesn’t represent the recipe as given. Tomatoes, far from being cooked in the dish as described, are scattered raw over the top, as is lots of chopped fresh mint, and the aubergine is placed on the top rather than stirred through. It was clear from my very tasty but brown and mushy dish that I was lacking the fresher flavour profile I’d hoped for when the photo caught my eye. Another one that I’d remake, but definitely with adaptations. 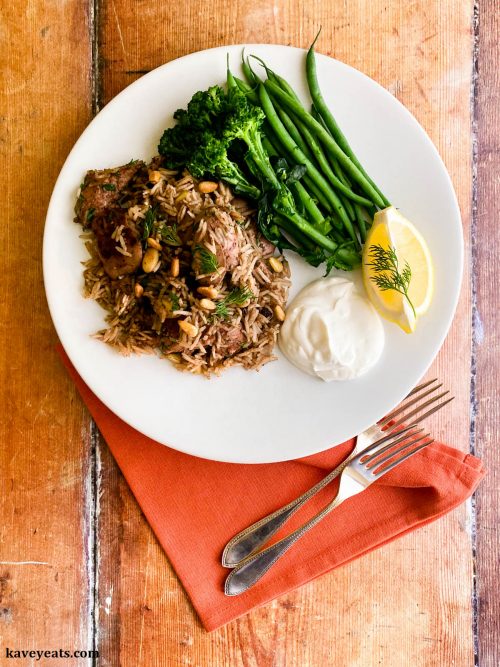 Chicken liver pilaff with currants, pine nuts and almonds also suffered from cavilling about quantities (is it one or two teaspoons of the powerful allspice powder to perfect this dish?) and once more had a misleading photo, with proportions of liver to rice way off the mark. I don’t consider 1.5 to 2oz of liver per person a main dish quantity and it showed in the finished meal. I’d have this again but increase the liver quantity (and try the suggested lamb’s liver variant).

There are loads of interesting recipes in the Fish and shellfish chapter, like Sea perch baked on a tile with poppy seeds. This has cabbage leaves and pink peppercorns in the mix and I can imagine it being a delicately scented dish perfect for the summer months.

Likewise, alongside the traditional kofte, Meat stuffed vine leaves and Stir-fried liver with red onion, the Meat and poultry chapter also includes an unusual Chicken with green plums and grape syrup which sounds beautifully balanced between tart, sweet and umami. I found some fascinating new things to explore in this section as well as the more familiar. 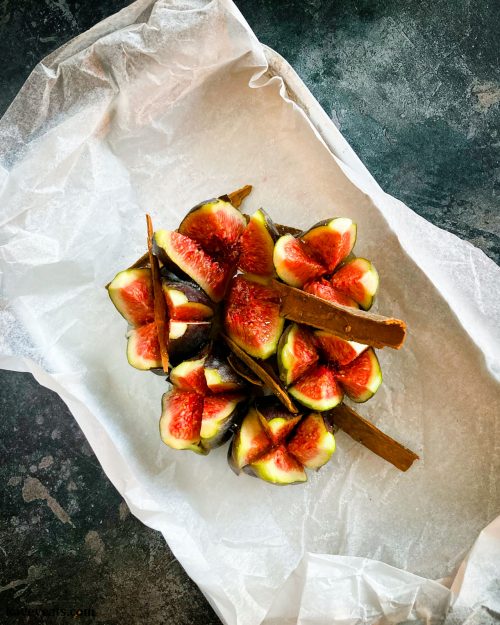 Finally, Fresh figs baked with honey from the Sweet snacks and jams chapter reinforced my frustrations with The Turkish Cookbook. Variation of quantities on the ingredients was obviously now a quirk I expected, but worse, as I was lacking the required vanilla sugar I checked out the Cook’s tip, which required two tablespoons of sugar to be mixed with a whole vanilla pod’s seeds and sprinkled over the figs. Just way too powerful for the delicate fruit. A vanilla pod would easily flavour 500g of sugar. The cinnamon flavour was barely noticeable over the honey and sugar. This was yet another recipe – even this simple – that needed an experienced eye to review and question.

Based on my limited test run of The Turkish Cookbook, it’s a fantastic and intelligent trove of highly-flavoured, scented, complex and exciting Turkish recipes that range widely beyond the standard dishes we see in most high street restaurants and comprehensively beyond many other recipe books. But buyer beware. Caution will be your best investment to get the most out of Ghillie Başan’s fragrant, herb and spice laced guide to the breadth of Turkish food.

Please leave a comment - I love hearing from you!2 Comments to "The Turkish Cookbook by Ghillie Başan"