After my introduction to sous vide –  in which I explained what sous vide means, its history, how it works and the advantages and disadvantages of this cooking technique – I was planning to share a clever, inventive recipe with you… something to show off the cheffy possibilities… something unusual and impressive.

But after all that, I decided to talk to you about sous vide steak! I have always loved steak and we often cook it at home, varying the cut depending on our mood and what’s on offer, though most commonly settling on rib eye. We were happy enough with our technique – oil (and season) the steak not the pan, heat the pan until it’s properly hot, add the steaks and don’t move them at all until it’s time to flip them over, cook the second side, remove from the pan and rest for several minutes while making the sauce – but it wasn’t unusual for us to cook the steak a little more or less than we’d intended; the finger test is helpful but still a little tricky to call. And then I read that using a sous vide machine to cook steak should make it impossible to over or undercook, so steak was an obvious candidate for one of our first experiments.

And we discovered that cooking steaks accurately is ridiculously easy this way!

We have now cooked several steaks in our Sous Vide Supreme, including sirloin medallions (on offer at the local supermarket), rump and some fabulous grass fed New Zealand wagyu rib eye steaks from Provenance Butcher. Each time, we’ve been thrilled with the perfect cooking, even texture and excellent flavour – even less expensive steaks (that haven’t been dry-aged for a long period or aren’t from rare breed animals) taste intensely beefy. The wagyu rib eye in particular really benefited from the gradual melting of the marbling into the surrounding meat.

Recipes list cooking times anywhere between 1 and 6 hours for steak; however, we find 1.5 to 2 hours is plenty of time for the meat to cook through, for steaks up to 3 cm thick. We like our steaks medium rare, so we sous vide them at 56.5 °C (133.5 °F); I found this chart very useful in selecting the right temperature.

Be prepared for the steaks to look rather unappealing when you take them out of the sous vide machine – a rather pallid pinky-grey; the caramelised flavours and dark brown colour that most of us appreciate on a steak are created by the Maillard reaction, for which one needs higher temperatures. For this reason, we briefly sear the steaks after they come out of the sous vide machine. 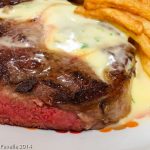 The steaks can remain in the sous vide for quite a lot longer than the required cooking time – the beauty of sous vide is that they will not overcook, since the internal temperature will not rise above the temperature of the water bath. That said, I have read that leaving steak in the sous vide for a very long time can result in the meat becoming mushy, usually in reference to cooking times of 15 hours or more. One of the questions I’ve been asked, by friends who know I’m experimenting with the Sous Vide Supreme, is whether we’ve found it worthwhile using it just to cook steaks, given that we’d previously cooked them happily enough in a frying pan. I asked myself the same question before I started using it, because it’s quite a bulky piece of kit and it really needs to justify itself, given how much storage space it takes up. In fact, we have found it quick and straightforward to fill with water, set the temperature, seal food into bags and submerge to cook, so it’s not felt like a chore to use it at all. When we’re done, it’s easy to empty into the bath, leave aside to dry and put away again. Of the equipment we own, it’s our deep fat fryer that we use more rarely because filling (and emptying) the oil is far more of a faff. That’s been a good benchmark for us to use for assessing how we feel about the Sous Vide Supreme.

What do you think? Do you have a Sous Vide Supreme? Or have you considered buying one? Do you think you’d get enough use from it? Would it be a white elephant or kitchen hero? I’d love to know your thoughts, and for those of you that have one, please let me know your favourite sous vide recipes and techniques. (For fellow Pinterest users, here’s my Pinterest Sous Vide board).

Kavey Eats received a SousVide Supreme and vacuum sealer in exchange for sharing my experiences using the equipment.
The sample of Grass fed New Zealand wagyu rib eye was courtesy of Provenance Butcher.

Please leave a comment - I love hearing from you!22 Comments to "The Sous Vide Steak: How, Why and Is It Worth It?"