This post contains Amazon and SousChef affiliate links; we earn commission from qualifying purchases. We received a review copy of this book.

Mely Martínez describes this book as traditional home-style recipes that capture the flavours and memories of Mexico, and the delicately punchy red and gold frontispiece and cover do give that feel. The author starts with a warm and engaging introduction to herself, her life and her love of food, explaining how The Mexican Home Kitchen emerged from her own experimentation with the recipes from her neighbours and friends, her own family’s cooking background and the publication of her now 12-year-old blog.

She then kicks off the content with a useful starting point: an introduction to the Mexican pantry, tools and equipment, showing how to roast vegetables the Mexican way and production of those two key essentials, corn and flour tortillas. 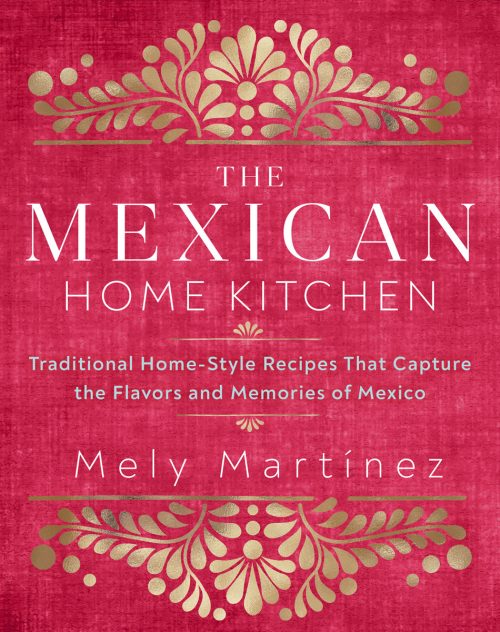 The Mexican pantry section is particularly useful, covering things like chayotes (a member of the gourd family), nopales (a variety of peppers), masa harina flour, Mexican dairy products and herbs like epazote, many of which will be unfamiliar to a casual cook in the UK. I’ve found a number of good suppliers in the UK such as Mexgrocer and SousChef who can provide the basics. Even without those ingredients, using only those such as jalapeño peppers that you can find in a supermarket you can recreate a fair number of her dishes. However, I would advise that by seeking out the recommended ingredients to create Mely’s dishes, you’ll get better results, have access to more recipes and make far better use of the book.

The tools and equipment section is a little more forgiving, with alternatives given for some of the less accessible options though, as the author says, if you find yourself increasingly cooking Mexican food, you might want to invest in some of the traditional kitchen items.

Contents thereafter are divided into soups (like Pozole Rojo and the simple Crema de Elote), main dishes (such as Asado de Puerco and the veggie Empanadas de Queso), salsas and sides (including Pico de Gallo and Frijoles Pintos Cremosos), and desserts and drinks (more of these later). I really liked the way each dish was listed in the contents section in Mexican and in English with the page number. I haven’t often seen this and found it really useful.

The majority of recipes have accompanying photos (some have step-by-step pictures) and all have a section called notas which provides alternatives, advice, substitutions, timesavers, optional ingredients, re-heating, storage information and much more. The “rattling coin” tip when discussing the use of steamers certainly caught my attention and made me smile.

The photos are bright and sympathetically styled with traditional Mexican crockery, cookware, glassware, and fabrics, though the lighting has a slightly old-fashioned look reminiscent of the Hamlyn All Colour Cookbook my mum gave me when I left home many years ago. It gives a nostalgic feel, in line with the home-style ethos of the cookbook.

Each recipe has a title in Mexican and in English and a short accompanying background and description, again often with alternatives and additions. Whilst there are (for example) 36 main courses in this book, the advice in the background section and the notas combined would give many more variations. Counterintuitively, it often helps to read the notas before you read the recipe, as that will allow you to determine what you’re going to buy or use from your pantry to make your final dish. Handily, weights and measures are given in both American and European notation (I still struggle with cup measures and sticks of butter).

One disappointing aspect for me was that, despite the author growing up in a seaport and seafood being an essential part of her weekly menu, only two recipes in the entire book comprise fish or shellfish. I scoured the index for more without success. The index is comprehensive and is in Mexican as well as English which is handy if you have squirreled away the Mexican name for a dish in your head. It also covers both major ingredients like chicken, and minor such as lettuce, carrots, cumin or lime wedges. Frustratingly, there’s no list of dishes under the title “beans”. Instead, you have to look under the heading of each individual bean type. 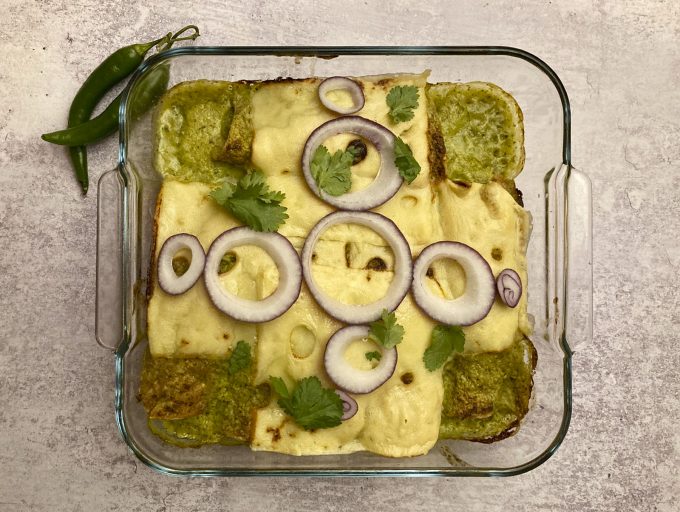 The first dish I chose to make was Green Enchiladas (Enchiladas Verdes) – specifically picked because it was a pretty looking dish, I had sourced some tomatillos and had some high-quality corn tortillas to use that I thought would fit the bill. The outcome wasn’t particularly successful. It was a fairly bland dish despite the notas stating that sour cream would be needed to cool down the spiciness of the salsa. We needed our added accompaniment of pickled jalapeños. The corn tortillas disintegrated somewhat and the melted Swiss cheese slices on the top had a tough and plasticky feel once cooked. Perhaps the Swiss cheese available to Mely is texturally different to that available to me. 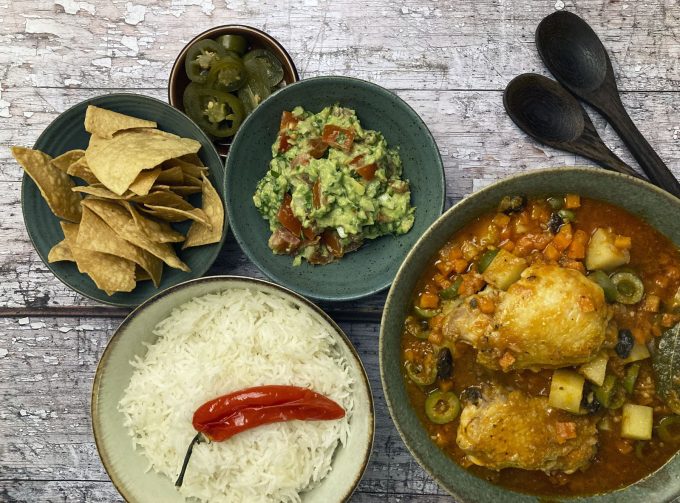 Undeterred I tried three other dishes. The first was Chicken Veracruz-style (Pollo a la Veracruzana), chosen because there was no accompanying photo (always a good test of a cookbook) and because the author claims this is very much her own take on a popular recipe which she grew up cooking “adding a little bit of this, a pinch of that, and tasting to see if it needed something else”. She describes it as a forgiving dish. I really enjoyed this and will make it again. There were minor things in the recipe that needed some clarity such as how large to dice the potatoes and carrots, and whether timings should change for breast meat vs thigh meat but overall it was straightforward, complex and warming. I think as Mely says it will flex to be a useful basis for variations on the same theme.

I also made the unassuming sounding White Rice (Arroz Blanco). This can be served as a main dish with a fried egg on top and some fried plantains but we served it as a side with the aforementioned chicken. This is an aromatic take on traditional steamed rice that I genuinely thought would be overcooked when I read the recipe, with its multiple stages and long cooking time. It was fluffy, separate and light, delicately fragrant and deserving of the extra time taken in its preparation.

Finally, the ubiquitous guacamole. It was good to read a history of the word itself as well as Mely’s advice on choice of fruit, and on preventing oxidisation. I was interested that this version contained tomato as I’d previously understood this to be heresy – apparently not. A simple reliable recipe.

My overall impression of this book is that (true to its name) it has dishes that you would not necessarily find in a restaurant-style or contemporary/“modern” Mexican cookbook. If you invested in some of the key ingredients and had a little time to play, recipes such as tamales and stuffed peppers would be good fun to make, and there’s an intriguing selection of drinks that are just a little different, such as rice- and milk-based Horchata and chocolate-based Champurrado. There’s also a good selection of home-style, hearty soups and evening meals, either slow cooked or quick to pull together like Chicken Tostadas, which it would be easy to experiment with on weeknights with less time available. Desserts include churros, cakes, crepes, sweet tamales and Mely’s inviting-looking take on the traditional flan. Mely has offered us a glimpse into her kitchen and it feels like a cosy place to be.

We have permission from Rock Point (Quarto) to share some recipes with you from the book:

Please leave a comment - I love hearing from you!4 Comments to "The Mexican Home Kitchen by Mely Martínez"