The different regions and countries that make up the United Kingdom all have their own specialities, but some foods are eaten across the UK. There may be slight differences in the recipes depending on exactly where you eat them, but these dishes are popular throughout the country.

I hope you enjoy these suggestions for the best British foods to sample when you visit the United Kingdom.

This is the final post of my series sharing the best traditional food from all around the United Kingdom. You can check out some of the other traditional foods from Scotland, Wales, Northern Ireland and England in the rest of the posts in this series. 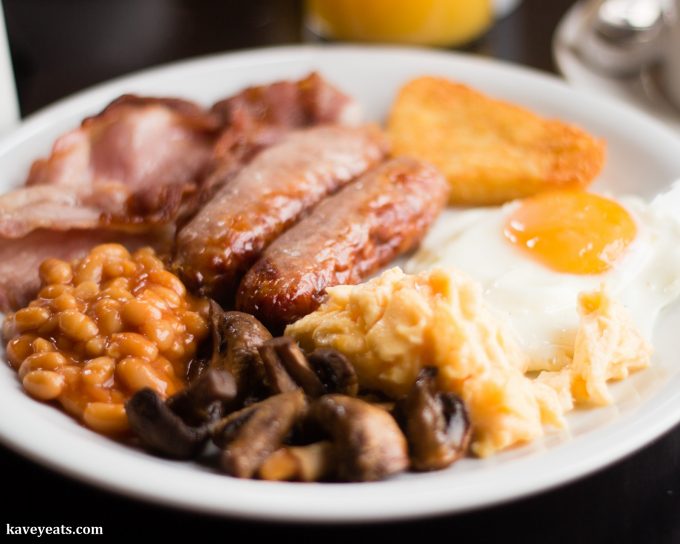 Throughout the United Kingdom, you can start your day with a full cooked breakfast. You’ll see this on the menu as a Full English, Full Scottish or Full Welsh breakfast, but in Northern Ireland it’s called an Ulster Fry.

Each of these will feature fried or grilled bacon and sausages accompanied by eggs, which can be fried, poached or scrambled. Other items in your breakfast can include black pudding, grilled or fried tomatoes, mushrooms and baked beans.

In Scotland, your cooked breakfast may also include haggis, slices of square sausage and tattie scones (potato cakes). A Full Welsh Breakfast might feature some laverbread (cooked seaweed) and Glamorgan sausages, which are vegetarian sausages made of cheese, leeks and breadcrumbs. And if you order an Ulster Fry, you’ll probably find potato farls and some white pudding on your plate.

Fried bread or toast (sometimes both) will always accompany a cooked breakfast, as well as plenty of tea or coffee. 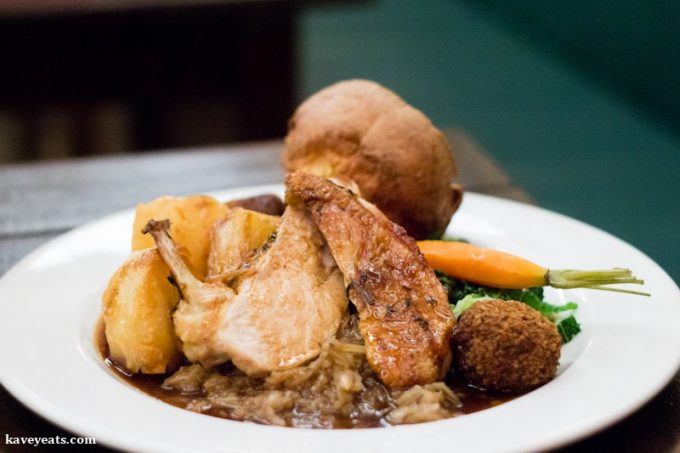 A traditional Sunday Roast is no longer the immutable weekly institution that it used to be, but many UK families still enjoy a roast lunch regularly, either at home or in a pub or restaurant.

The star of the show is a joint of roast beef, lamb or pork, or a whole roast chicken. Alongside you’ll find potatoes (mashed, roasted or both) and an array of vegetable side dishes such as cauliflower cheese, carrots and swede, parsnips, and cabbage. There will probably be stuffing with a roast chicken or pork dinner, and you should definitely have Yorkshire pudding with roast beef.

There are specific sauces that pair well with each meat: horseradish sauce or mustard with beef, bread sauce or cranberry sauce with chicken, mint sauce or redcurrant sauce with lamb and apple sauce for roast pork. And you must always have plenty of gravy to accompany your Sunday Roast! 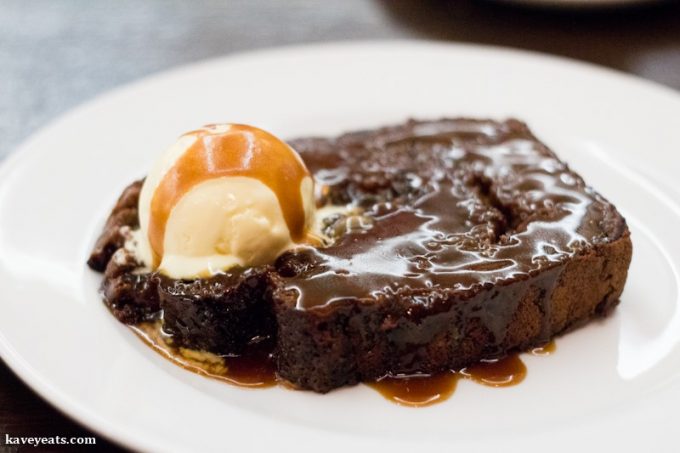 If you have room after your roast dinner, you might be able to squeeze in a portion of another traditional UK dish – a classic sweet pudding.

There are many recipes that are popular throughout the country such as jam sponge, treacle sponge and sticky toffee pudding. Then there are suet puddings like jam roly poly, spotted dick or Sussex pond pudding.

They’re all rather sweet and very filling, and traditionally served with plenty of custard on top, unless you prefer yours with cream, or ice cream cream, or a combination! 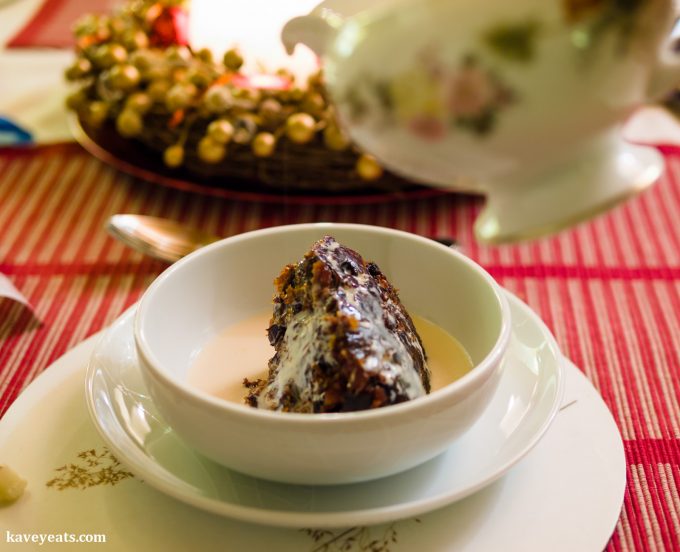 by James Petts via Wiki Commons

These three dishes are an important part of traditional UK Christmas celebrations. All of them date back several centuries, although the recipes have changed along the way.

A traditional Christmas cake is a rich fruit cake, generously doused with brandy and covered with marzipan and icing.

Mince pies are little pastry cases filled with a mixture of suet, dried fruit, candied peel, sugar and spices. HIstorically, the mincemeat filling included actual meat (beef, lamb, or goose) but these days the only animal product used is suet, often replaced with butter or vegetable oil for vegetarian versions.

Christmas pudding is a steamed sponge pudding that’s packed full of fruit and nuts. It’s traditionally brought to the Christmas dinner table covered in alcohol and set alight. Once the alcohol has burned off, the pudding is served with lashings of hot custard, brandy butter or rum sauce. 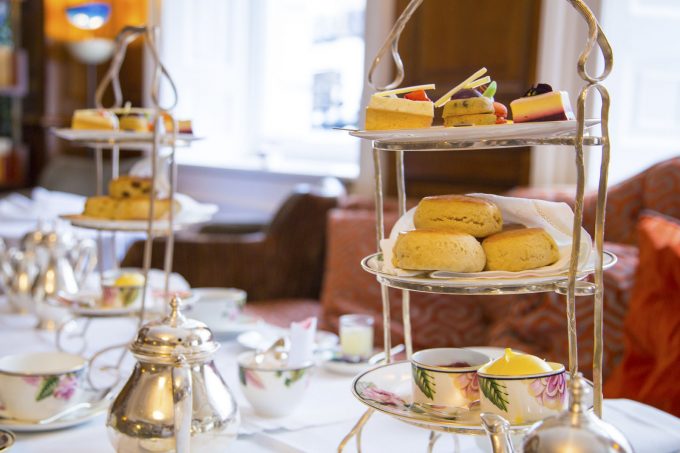 The tradition of afternoon tea – served between 3.30 and 5 pm – is thought to have been started by the Duchess of Bedford in 1840 as a way to stave off her hunger pangs until dinner. Nowadays, it’s a wonderful way to celebrate a special occasion or just catch up with friends.

Afternoon tea is traditionally served on a three tier stand, and includes delicate finger sandwiches, scones served with jam and cream, and a selection of dainty cakes and pastries. It’s traditionally accompanied by a pot of tea, or maybe with a glass of Champagne.

Don’t confuse afternoon tea with a cream tea (scones with jam and cream, and a pot of tea, but no sandwiches or pastries), or with high tea (a working class synonym for the evening meal, so called because it was eaten at a high – dining – table). 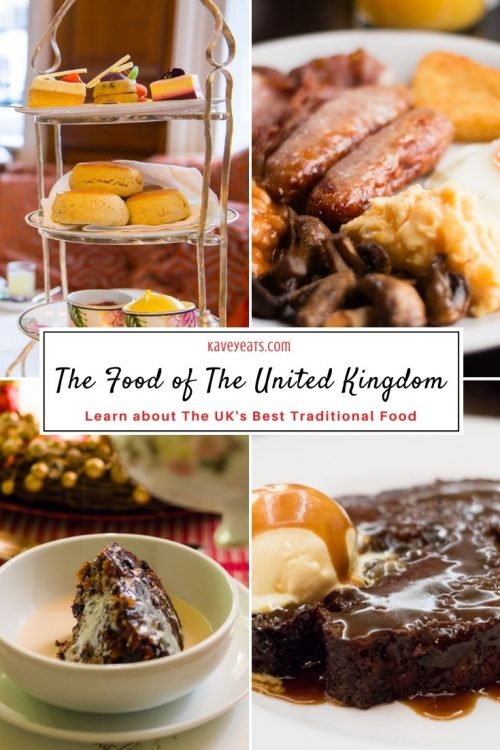 These are just a few of the wonderful traditional UK foods. Do you have a favourite traditional dish from the UK?

Please leave a comment - I love hearing from you!3 Comments to "The Best Traditional Food from the UK"