If you’re anything like me, Japanese cuisine is a huge part of the attraction of a trip to Japan. There are so many different foods to try, far more than the sushi, tempura, ramen and miso soup that are so well known outside of Japan. For several years, I’ve been creating a list of local food experiences for my next Japan visit (and the next one and the one after that) to help me experience as many local specialities as possible. This post shares twenty Japanese food specialities worth travelling for and where to find them. 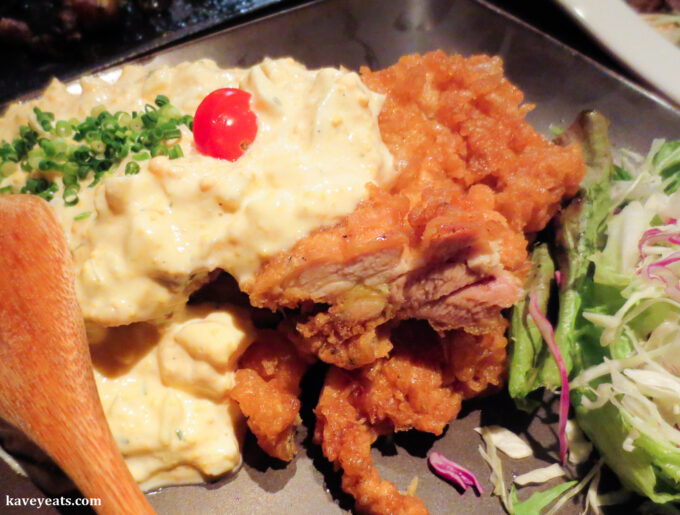 A speciality of the Miyazaki Prefecture in Southern Kyushu, chicken nanban is a local adaptation of yoshoku (western style food). Fried battered chicken tossed in a vinegar-based sweet and sour sauce is served with a generous portion of tartar sauce. The dish is thought to be inspired by the Portuguese Peixe Frito de Escabeche (fried fish in a vinegar sauce) that was introduced to the region by merchant traders in the 16th century. It’s a popular staple of izakayas in the region. 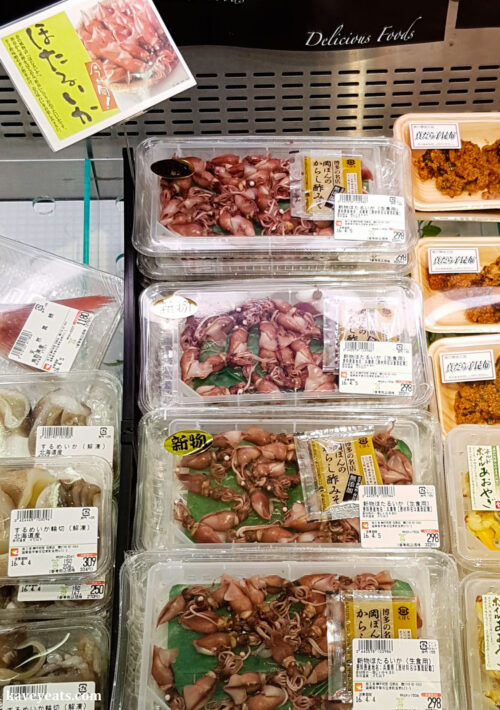 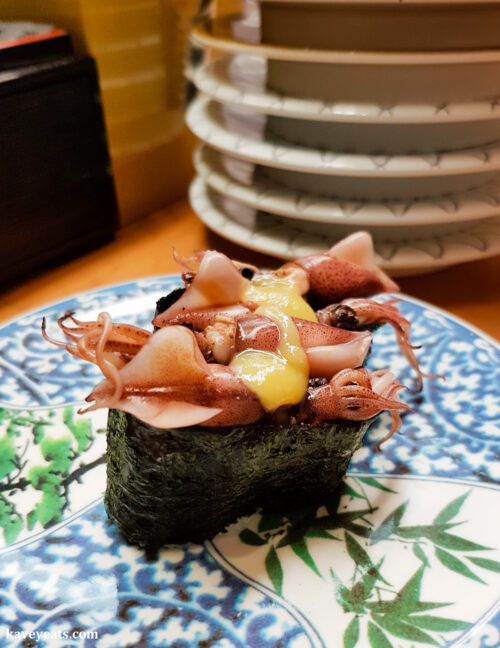 A seasonal delicacy, firefly squid are fished along the coastlines of Toyama Prefecture during March, April and May. If you visit during the right month when the squid are spawning, you can take a night excursion out to see the squid luminescing a bright pale blue in the water, or see them washed ashore along the beaches. As these squid are usually eaten whole, the taste is quite strong as the squid’s liver has a lot of flavour. They are served cooked (usually steamed or boiled) or raw. A good place to try them is at Kanazawa’s Ōmichō market (located in neighbouring Ishikawa prefecture). 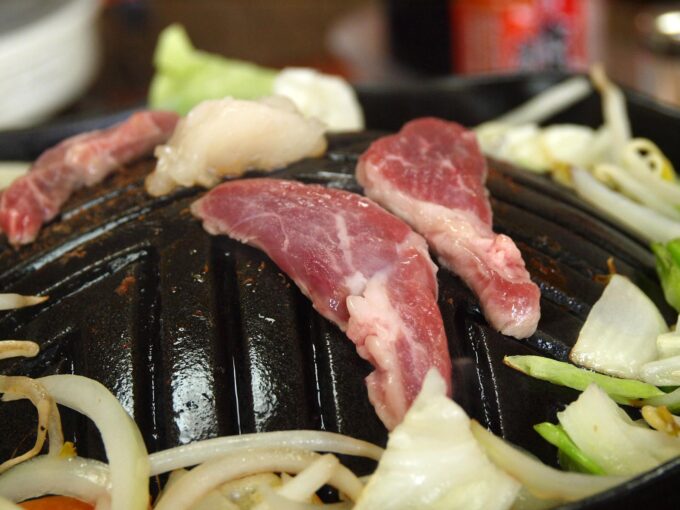 Jingisukan (“Genghis Khan”) is a Hokkaido style of yakiniku featuring mutton cooked on a charcoal grill. Yakiniku meats are often marinaded first and then grilled but in this Hokkaido dish the meat is grilled plain and then dipped in a sauce once cooked. An array of vegetables are arranged around the outside edges of a grill with the meat cooked on a raised central area, so that the juices and fats from the cooking meat run down into the cooking vegetables. The dish is said to have originated in the region when locals used the meat of sheep that had been bred for wool as a source of food. 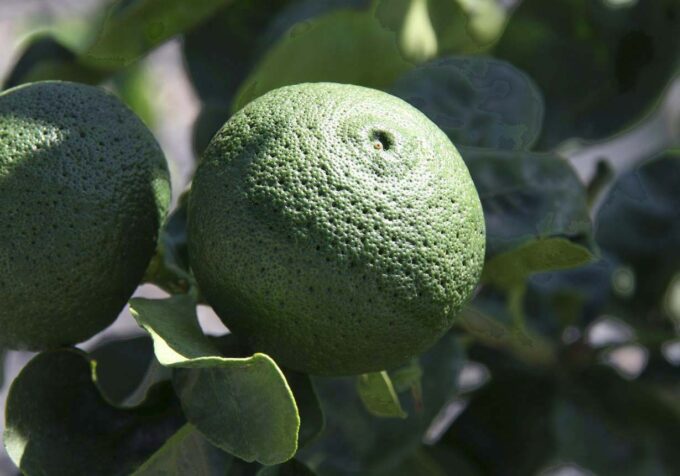 Kochi Prefecture in Shikoku is the main producer of yuzu, a distinctive citrus fruit used throughout Japan in condiments, dressings and garnishes. Whilst yuzu is becoming better known outside of Japan, there are many more citrus varieties to discover in Japan.

Citrus lovers should also head to Oita Prefecture in Kyushu, home of the related kabosu citrus. Yellow when ripe, the harvest begins in late August when the fruit is still green and continues throughout autumn as the fruit ripens fully to yellow. The sharp juice is used in cooking and as a condiment, as well as to garnish drinks. 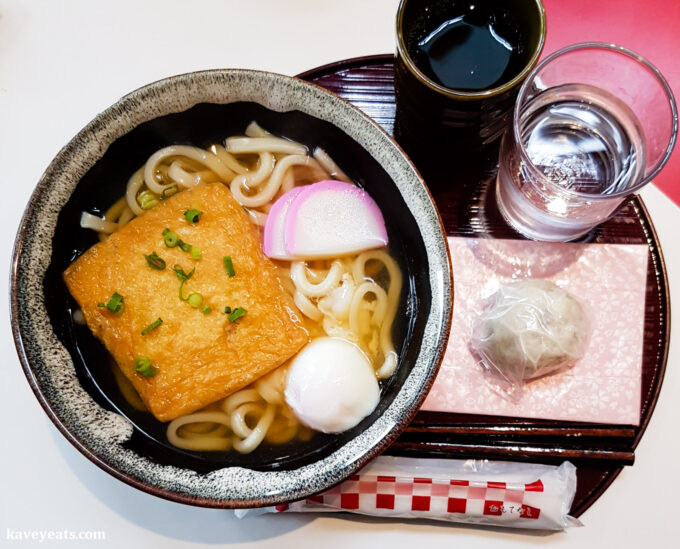 Kitsune Udon is a simple home-style udon dish of thick udon noodles served in a light dashi broth with a large piece of fried tofu. Kitsune means fox, and the dish is so named because it’s thought that the fox loves fried tofu. The clever fox features in many Japanese stories, and it is also considered to be a kami (Shinto spirit) and messenger to Inari, the kami (or god) of fertility, agriculture and industry. 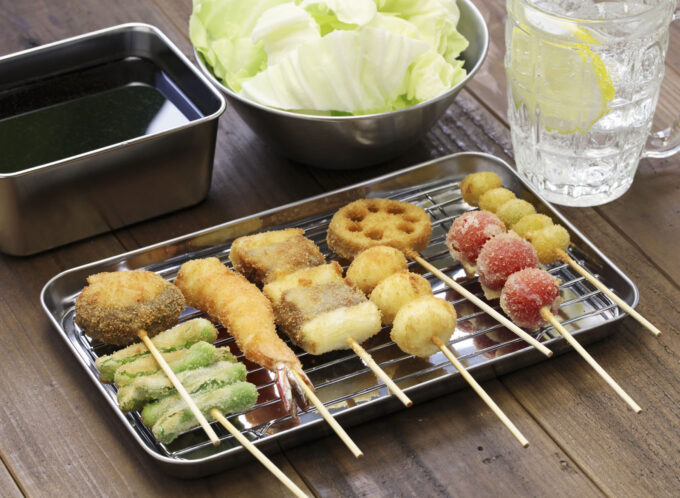 A must-visit for foodies, Osaka is not only the spiritual home of takoyaki and okonomiyaki, but also the city to enjoy kushikatsu, skewers of meat and vegetables dipped in batter and panko and deep fried.

You can buy these ready-to-eat but it’s more fun to find one of the many local restaurants that let you select from a range of skewers to cook yourself at the table. 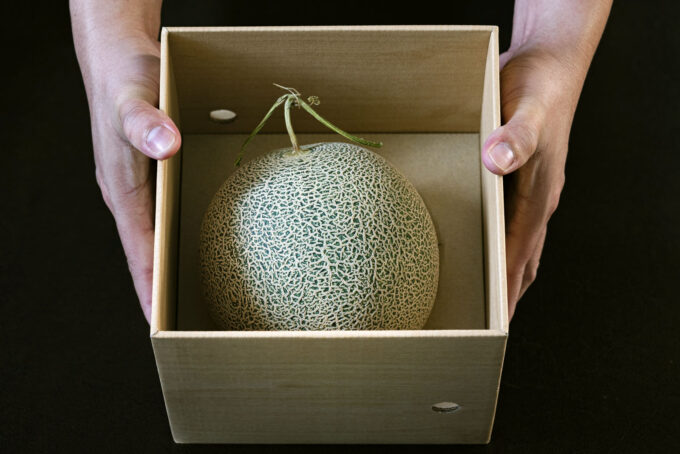 If you’ve heard about melons selling for incredibly high prices, chances are they were Yubari Kings, a much-prized cantaloupe melon cultivar. Farmed in Yūbari, near Sapporo in Hokkaidō, top-grade melons are a popular but very expensive gift. 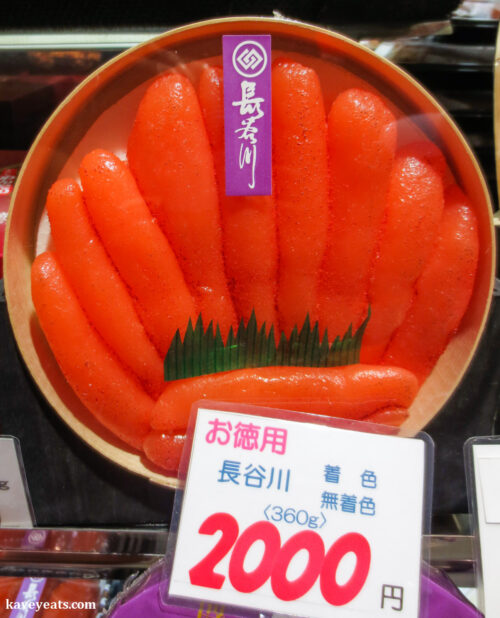 Karashi mentaiko (literally spicy fish roe) is a much loved dish in Fukuoka, on the island of Kyushu. It originates in Korea and was brought to Japan by Toshio Kawahara who founded Japan’s oldest mentaiko company shortly after the second world war. The roe is most commonly from Alaskan pollock fish, a type of cod. The ovary is removed from the fish whole, and the fish eggs are kept within the membrane sac for curing in salt, before being served in a chilli seasoning. 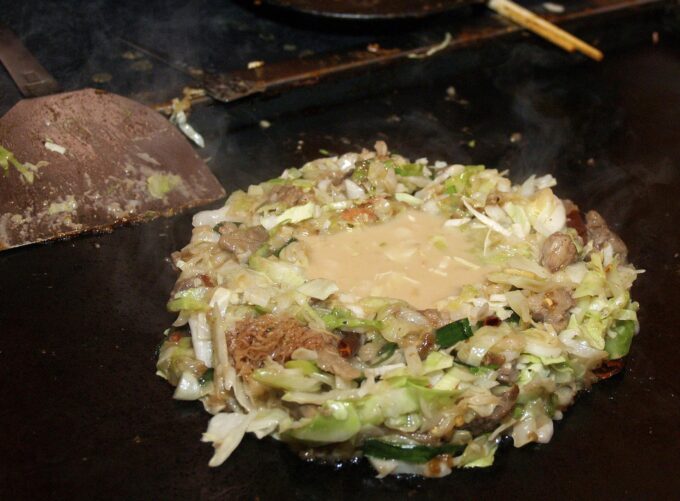 Okonomiyaki is hard to describe, as it falls somewhere between a pancake, a pizza and a frittata. A large thick fritter cooked on a hot plate, often in front of or by the diners, it consists of shredded cabbage mixed into batter with ingredients such as pork, seafood and vegetables added. Once ready, the fritter is topped with bonito flakes and generous zig-zags of mayonnaise and a thick brown sauce that is sweet, sharp and tangy.

Head to Nishinaka Street in Tokyo’s Tsukishima district to find a concentration of restaurants selling the unusual local variation of okonomiyaki – monjayaki. Made with a thin, runny batter and finely chopped ingredients, it remains sloppier than other types of okonomiyaki when cooked. 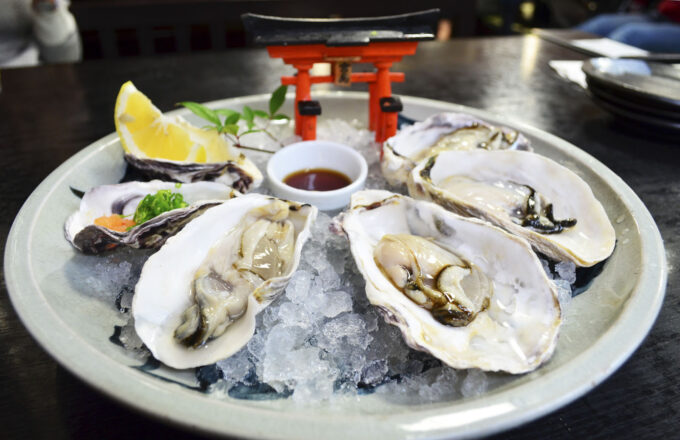 Hiroshima and nearby Miyajima are both great places to sample the oysters farmed in Hiroshima Prefecture. The main season runs from January to April, and the Miyajima Oyster Festival is usually held in February. Traditionally, they are served cooked rather than raw but these days they are sold to ready to eat raw, deep-fried, baked and grilled. 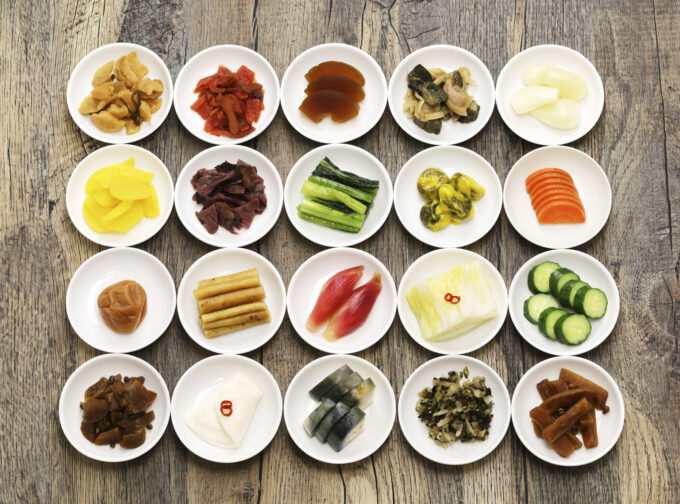 An intrinsic part of the Japanese diet, there are umpteen styles of tsukemono (pickles), often specific to a region. Nara, a small town near Kyoto, is famous for narazuke, pungent deep brown pickles made from daikon (white radish), uri (a type of gourd) and kyuri (cucumbers). Nara pickles are made by soaking in sake lees (kasuzuke), often for several years.

Pork and Beef in Kagoshima Prefecture 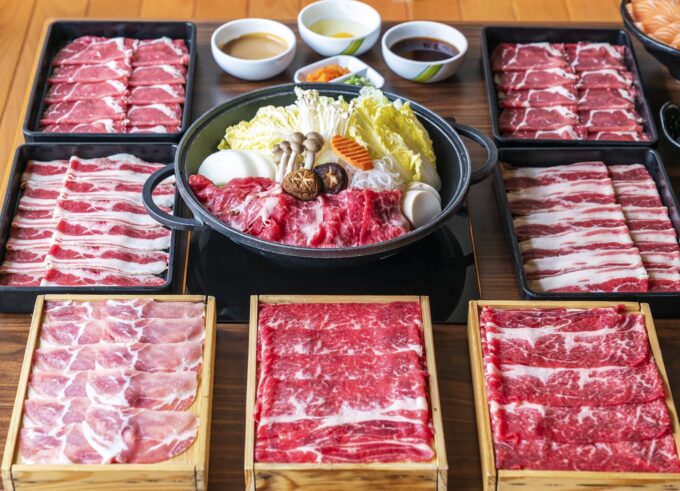 Kagoshima Prefecture in Kyushu is famous for its high quality kurobuta (black pig) pork, descended from black-skinned Berkshire pigs imported to the area 400 years ago and kuroushi (black cow) beef, bred locally. These two meats are served in many ways, including thinly sliced to cook in nabemono (hot pots) such as shabu-shabu and sukiyaki. 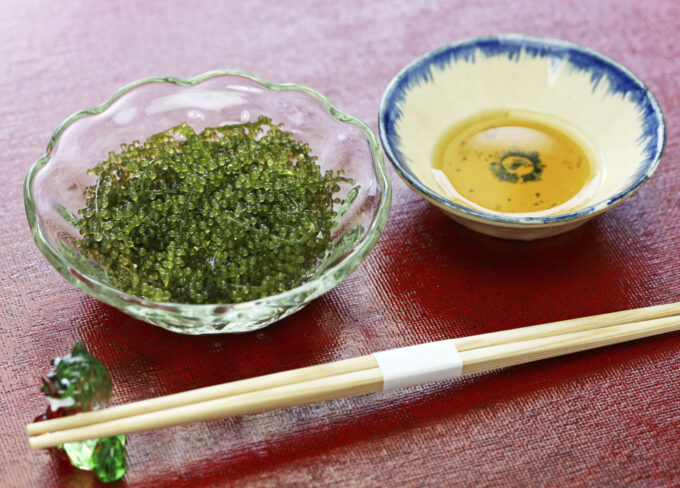 One of the specialities of Okinawa is umibudo, a type of seaweed also known as sea grape or green caviar. It’s usually served raw with soy or vinegar, and used in salads. Umibodo is prized for the little bubbles of seawater released when they burst in the mouth. The best place to try sea grape seaweed is in Miyako, where it is farmed along the coast. 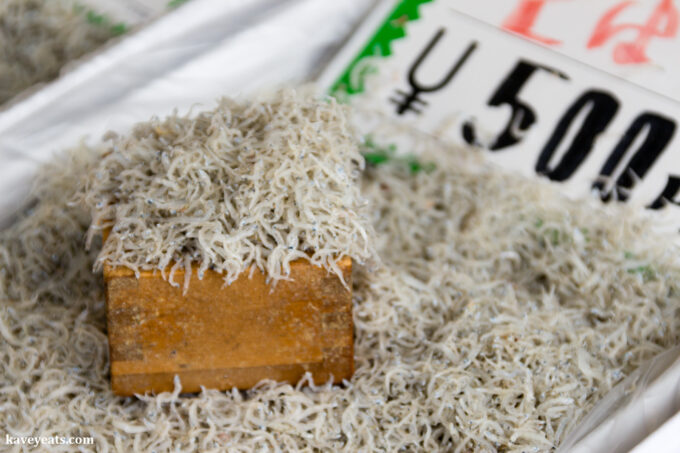 Shirasu are very small baby fish – what we call whitebait or fish fry in the UK – though they are fished much smaller in Japan. They are most commonly sardines or herrings, but can be other varieties of fish. They are enjoyed raw, dried or boiled, often with soy sauce. In shirasu-don, a speciality of Kanagawa, fresh raw shirasu is served as a rice bowl topping, often garnished with seaweed, fresh herbs and spring onion. 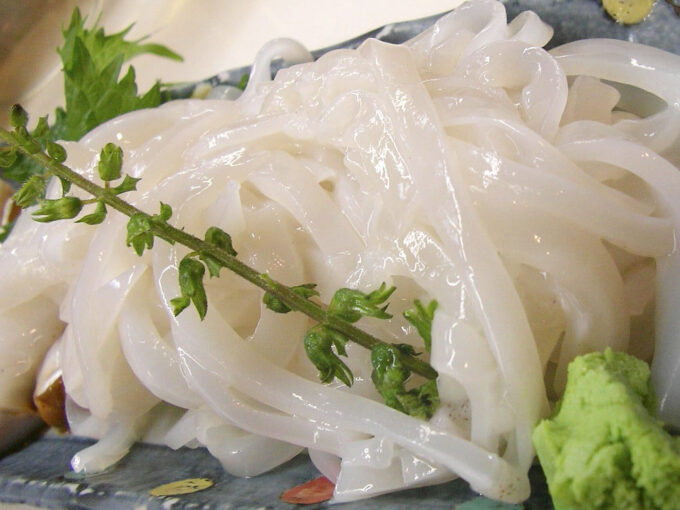 Ika somen (literally, “squid noodles”) is a dish of raw squid cut into fine strips resembling noodles. Usually served with grated ginger and soy sauce or mentsuyu (a soup stock made with soy, sake, mirin, kombu and katsuobushi). Although this is a type of sashimi, it’s eaten by slurping up the strips just like noodles. Ika somen is a Hokkaido speciality, most strongly associated with Hakodate, a fishing port where large catches of squid have traditionally been fished.

Sweet potatoes are popular throughout Japan; no more so than in Kumamoto where they are considered a local speciality.

Ikinari dango are sweet treats comprising a sweet potato and anko (sweet azuki bean paste) filling in a chewy mochi (rice flour) wrapper that is steamed to cook. Ikinari means ‘suddenly’; and its believed the sweets are so named because they are a quick food to make when you have unexpected guests. 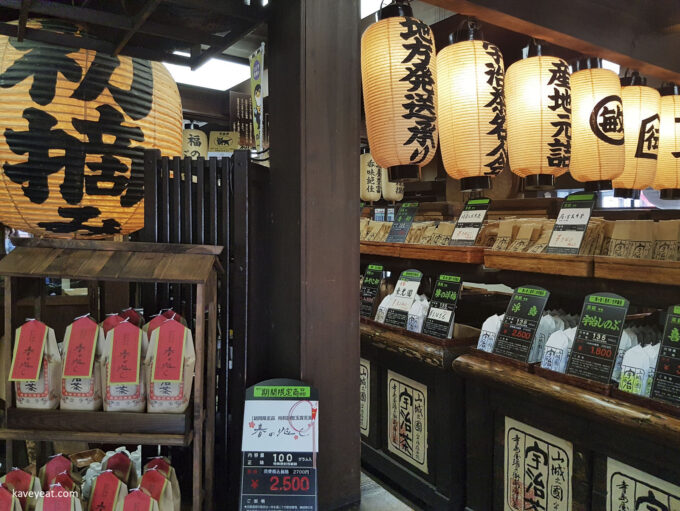 Green tea from Uji (near Kyoto) is prized for its high quality throughout Japan. Visiting Uji, you will find many local shops, restaurants and cafes selling both the tea itself and a variety of dishes incorporating it. You can buy different types of green teas to take home, and take a break by enjoying Uji tea with traditional wagashi (sweets) in one of the local cafes. 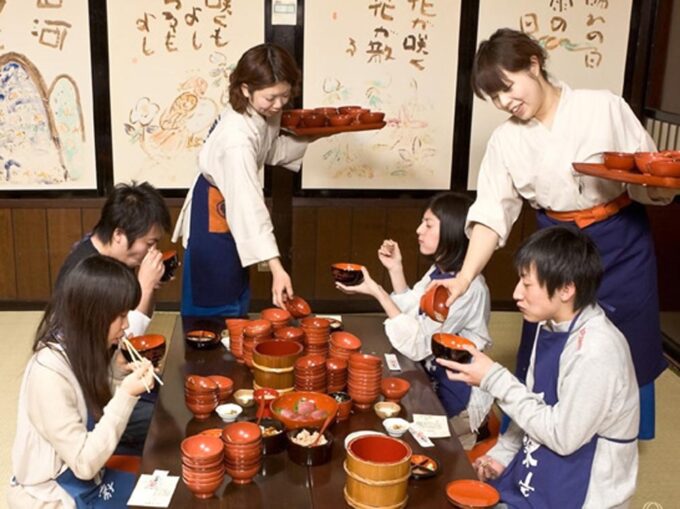 There are many origin-stories for the tradition of wanko soba, in which soba noodles are served in tiny bowls, one after the other until you are full. As you finish each bowl, the server will bring you another, resulting in growing stacks of empty bowls during your meal. Toppings are available to provide flavour. When you’ve had enough, quickly pop a lid on top of your last empty bowl to signify that you have eaten your fill. Ten to fifteen bowls are equivalent to a normal serving of soba noodles, but wanko-soba has become a competitive activity with volume and speed eating contents very popular. 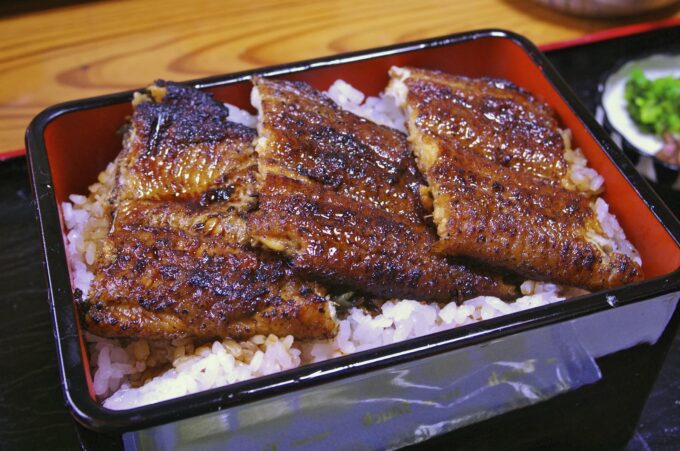 Unagi (freshwater eel) is popular throughout Japan, but the best quality unagi is fished in Lake Hamana located in Hamamatsu City, Shizuoka. There are many specialist restaurants surrounding the lake specialising a variety of unagi dishes. Unagi even has a day dedicated to eating it – the day of the ox, which falls in the heat of mid summer. The most popular way of cooking unagi is boned, brushed in a sweet-salty teriyaki sauce and grilled – more of the sauce is often brushed on during cooking to build up a rich layer of flavour. Unagi is often served on a rice bowl (known as unadon). 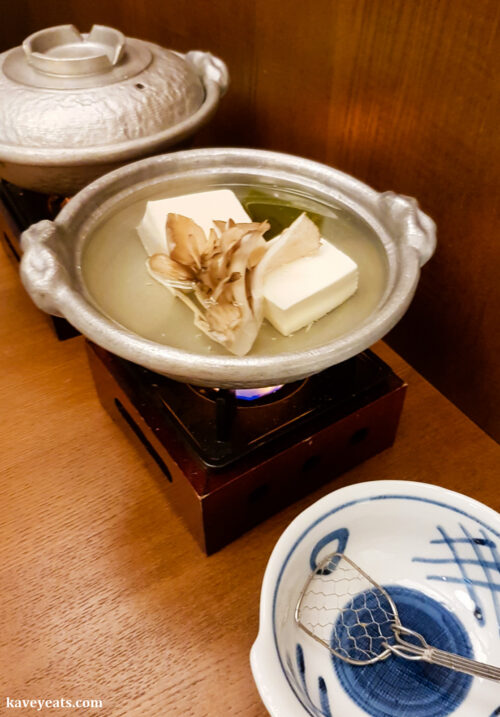 Although yudofu (hot tofu) is considered a Kyoto speciality, it is one you can find across Japan, especially in traditional kaiseki ryori where locally made tofu is often served in this way. Blocks of fresh tofu are served in a simmering broth, often vegetarian to reflect the popularity of the dish in shojin ryori (Buddhist cuisine). Ginger, sesame, soy sauce and spring onions are often served as garnishes.

Please leave a comment - I love hearing from you!23 Comments to "Twenty Tasty Local Specialities to Seek Out Across Japan"