You know that thing when you come up with an original recipe idea, and it’s utterly brilliant, and you’re so so pleased with yourself, and it’s so damn tasty, and you’re really excited about sharing your genius new idea with the world…

…and then you search the internet and realise that the old adage “there’s nothing new under the sun” really is true after all, because loads of people have come up with the same idea before you, and now you feel rather deflated?

Our home made yakiniku (indoor barbeque) was fantastic but the sliced sweet potato just didn’t work, so we had around 350 grams of thinly sliced sweet potato to use up. We also had 4 thick slices of ham leftover from the cheese, ham and chilli jam pancakes we made the day before that. The leap to creating a sweet potato and ham dauphinoise seemed ingenious!

Well, it was! The resulting dish was so darn delicious that I’m going to share it with you anyway, even if it’s not as much of an innovation as I thought at the time!

We decided to base the recipe on the easy potato dauphinoise recipe we make regularly, so we added 150 grams of regular potato to the sweet. And as we had some grated cheese left over (from those same pancakes), we sprinkled that over the top before baking, too. Apologies for the photos – I just grabbed a couple of snaps to record it and I want to share it with you right now! 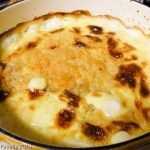 Tell me, have you had any of those moments I describe at the top of the post?