Shaka Zulu isn’t normally the kind of restaurant I choose to visit.

I made the mistake of going to Gilgamesh, located in the same building in Camden’s Stables Market and was terribly disappointed. Twice. Style, pomp and circumstance over substance; the food was terrible, both times.

When Shaka Zulu opened in August, it’s self-marketing as “the biggest restaurant and nightclub of it’s kind in Europe” didn’t fill me with confidence it would be anything different.

But the interior looked crazy and the kitsch pan-African theme made me curious. So when the lovely Cooksister and her husband Nick, both from South Africa, suggested I join them for a visit to check it out, I thought, “why not?”

Especially as they’d found an online offer to try a set tasting menu for half price, just after it opened. 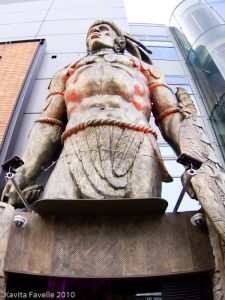 Actually, it wasn’t that easy to find. You might wonder how I didn’t immediately notice the several metres tall Zulu warrior outside, but as I couldn’t spot any obvious signage or menus for the restaurant, I initially assumed it was an exit . Still I worked it out eventually and descended the escalator down to the basement. 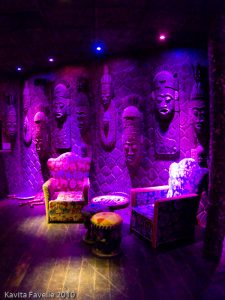 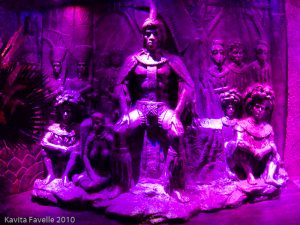 On entering, I was somewhat disoriented by the darkness which was broken up here and there by brightly coloured spotlights showcasing the carvings. I was asked (rather aggressively) whether I had a booking, though the receptionist failed to find it. Luckily, Jeanne and Nick arrived shortly thereafter, gave exactly the same name I had, and suddenly the booking was located. We were shown to our table in the Braai Restaurant. 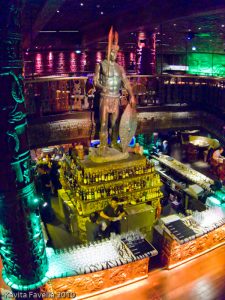 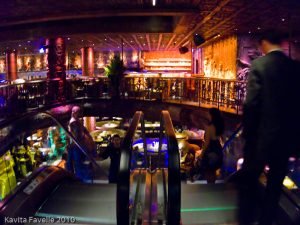 To reach it we had to descend another escalator – who puts an escalator inside a restaurant – which gave me the feeling of being in a themed Las Vegas shopping mall rather than a restaurant!

Shortly after being seated at our original table – one of what looked like several hundred others – we were asked to move to a different one. Apparently a couple had made a reservation for this table specifically, for an engagement celebration. We couldn’t figure out anything special about this table in terms of comfort, location or view but happily moved to a larger and more comfortable table. Sadly, this meant that the really friendly and switched on waitress we’d originally been assigned was no longer looking after us. Instead we were served by a much less helpful or efficient waiter who seemed to struggle with the basics of ensuring we had cutlery, had been served what we ordered, were happy with our meal, didn’t need anything else… 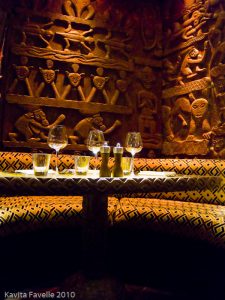 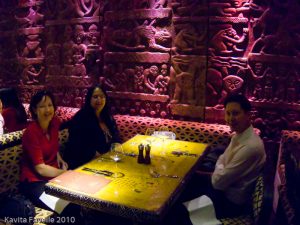 Jeanne and Nick ordered individual glasses of wine. Despite a clearly spoken order, the wrong wine was brought out and correcting the mistake seemed quite a palaver. I hope, by now, the staff have a better familiarity with the menu and wine list. 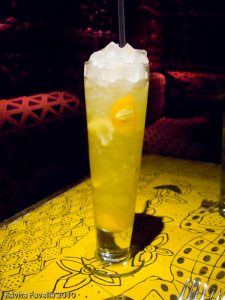 I went for a Sufrica cocktail – Absolut Citron vodka, kumquats, honey and lemon with crushed ice. Too much crushed ice meant there wasn’t much space in the glass for much drink but what was there was refreshing and nicely balanced. 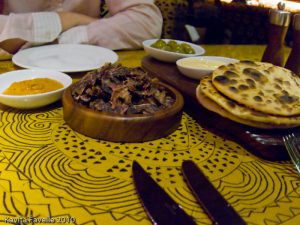 First on the menu was a bowl of shaved biltong, olives, two dips and some shraak bread. The biltong was actually rather good with a decent texture and flavour. I’m more of a fan of wet biltong but this dry style wasn’t too dry and we all liked it. The green olives were plump and had a nice gentle flavour. Both the cheese dip and spicy dip were great. Sadly, the bread we dipped into them was a disappointment. Although it had been re-warmed before serving, it cooled really fast and turned into an incredibly tough, leathery thing. 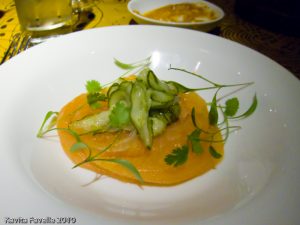 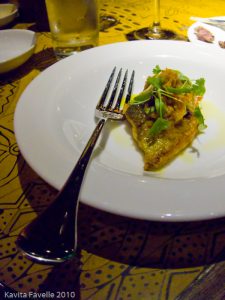 Next on the menu was Cape Malay pickled fish. As I’m not a huge fan of spicy, pickled fish I asked whether it might be possible to switch to the rooibos smoked salmon (priced at the same £8.95 on the a la carte menu). They kindly agreed.

Both dishes went down very well. My salmon with lightly pickled cucumbers was really lovely, though I couldn’t detect any hint of red bush at all. Jeanne and Nick praised the spicing and accurate cooking of their pickled fish. 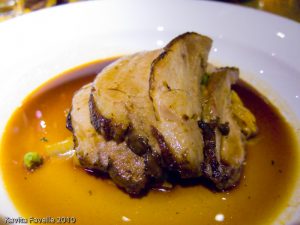 The main course was the 7 hour spit roast Dorper lamb served with chakalaka, Dorper being a breed of sheep common in South Africa. The lamb wasn’t as impressive as I’d hoped – though it was tender and nice enough, the flavour wasn’t sweet and strong as the best lamb can be. The spicy vegetable chakalaka hidden underneath the lamb (which resulted in a rather unappetising plate of brown, in terms of presentation) was tasty. 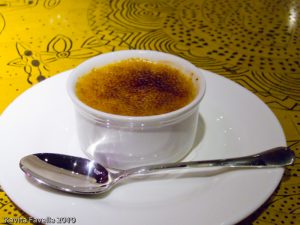 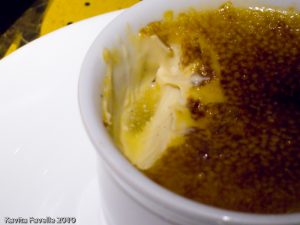 Opinion was divided on the rooibos tea brulee with honeyed oranges. I found the combination of citrus and custard alarming and particularly disliked the lumps of fruit and the puddles of juice beneath the custard. I ate only a bite or two. Jeanne enjoyed it much more and emptied her little ramekin. Again, the taste of red bush tea didn’t come through.

It was time for a visit to the ladies. “Where’s the loo?”, we asked one of the floor managers.

“Turn left past the warrior.”

OK then! Well, I can’t speak for the men’s facilities but the ladies’ toilets were rather grand. A bronze spotted cat lay on the floor in front of a floral mural. The stalls contained funky zebra paintings. And I fell rather in love with the crocodile-skin-effect sinks! 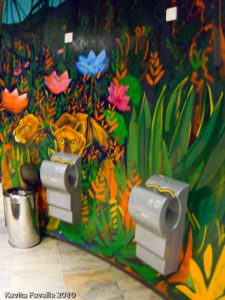 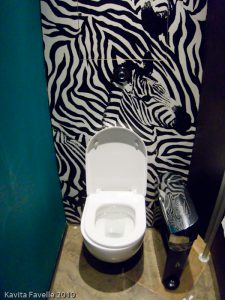 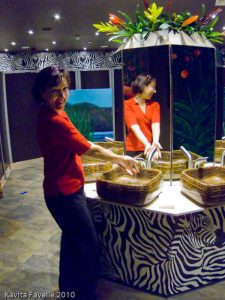 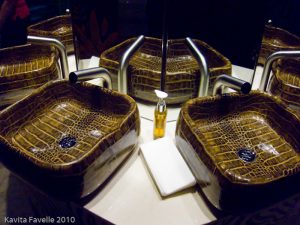 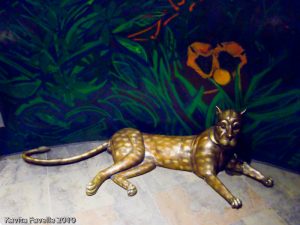 Of course, it wasn’t just the loos that were over the top. As I mentioned above, the whole space was more than a trifle bizarre and like nothing I’d ever seen in the parts of Africa I’ve visited. Jeanne and Nick concurred as we peered at intricate detail after detail. In fact, several pieces of furniture in the bar area upstairs seemed distinctly Indian rather than African. As I said above, the entire place put me in mind of a Las Vegas or theme park interpretation of African design. 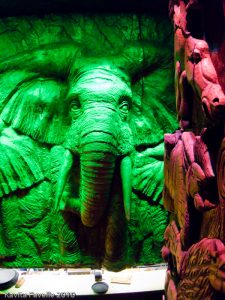 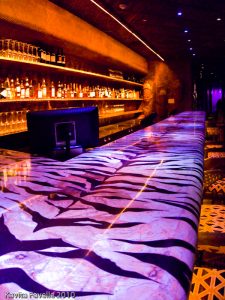 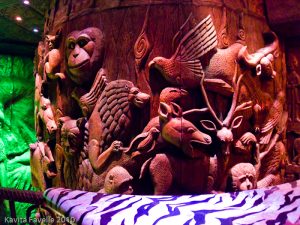 Would I go again? Probably not. Although the food was, on the whole, much better than I expected, the prices are high for what is, at the end of the day, a gimmicky themed restaurant.

I’m also not a huge fan of basement settings, preferring rooms with at least a couple of windows, even if it’s dark outside!

That said, I could certainly imagine popping in for a cocktail in the bar area before a night out with a group of friends and maybe a bar snack of that shaved biltong.

Please leave a comment - I love hearing from you!6 Comments to "Shaking it with the Zulu warriors"