People assume that because I’m so obsessive about food, I must surely be an experienced cook who has turned her hand to most of the common recipes and many of the more unusual or elaborate ones besides.

Truth is, I am neither as adventurous or experienced a cook as you might think.

I love eating, of course – I am certainly an adventurous and experienced eater (though many of my food friends beat me hands down).

But when it comes to cooking, although Pete and I do some great cooking at home from time to time, we also flake out with ready made chicken Kiev and oven chips and a repertoire of easy, familiar and no-brainer dishes that we make again and again.

However, having attended a pasta making course earlier in the year, and then won a pasta making attachment for Intergalactic Unicorn not long afterwards, it was time to jump over this mental hurdle and make our own at home.

For our first attempt, we made a plain and simple tagliatelle using the pasta dough recipe that came with the attachment.

For our second attempt, we got a bit fancier and made ravioli parcels with a ricotta, lemon, parmesan, fresh pea and herbs filling.

The dough was decent, the attachment worked like a dream. 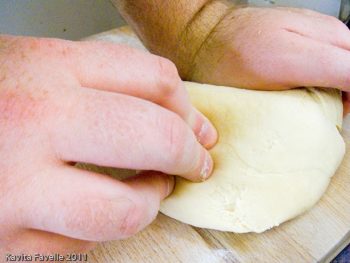 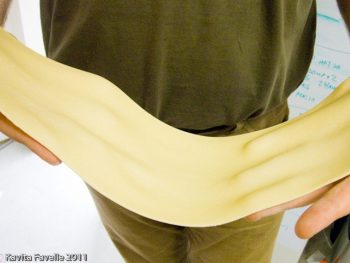 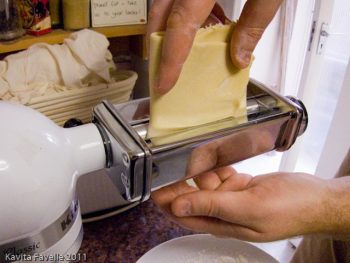 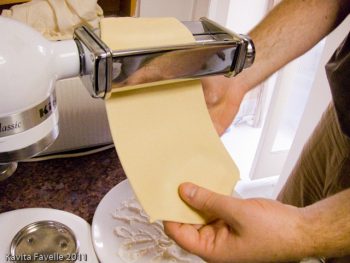 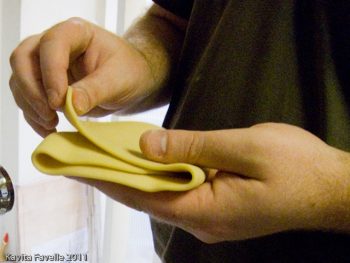 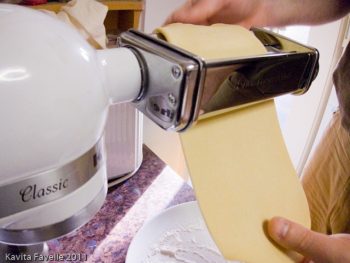 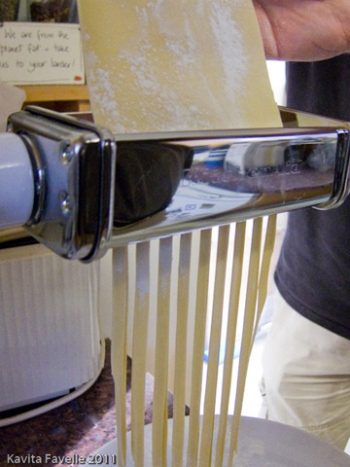 Before too long we had satisfying piles of freshly cut tagliatelle. 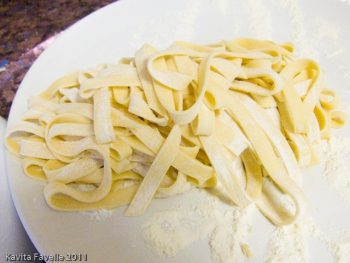 Our only mistake was not buying in any semolina, which Anna (the tutor for the pasta making course) recommended as a good way of stopping the pasta sticking to itself. Flour is too easily absorbed into the pasta whereas a roughly ground semolina is much easier to brush off the pasta. 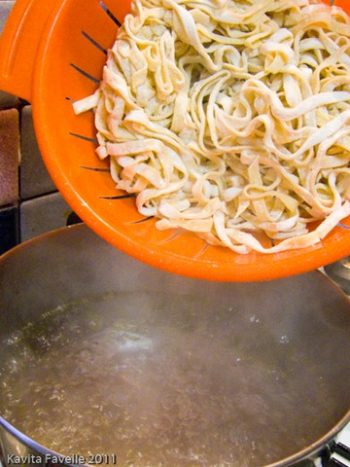 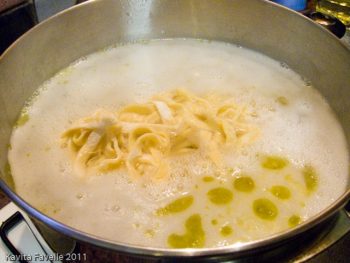 Despite the excess flour covering the pasta, it cooked quickly and didn’t clump together too badly.

We served it with a simple wild garlic, mushroom and bacon sauce. 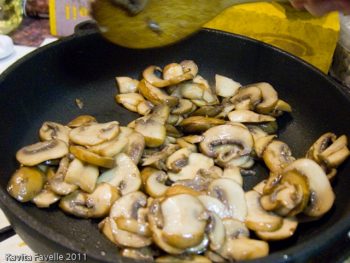 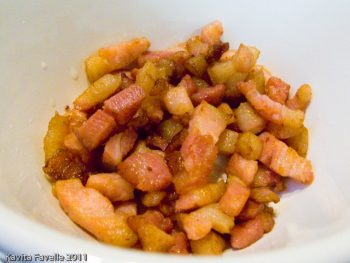 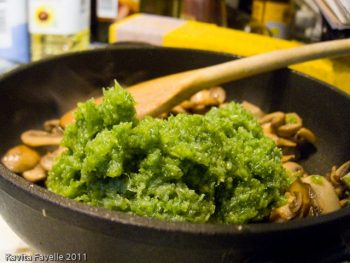 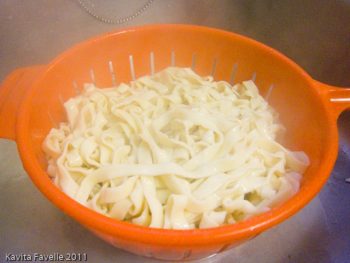 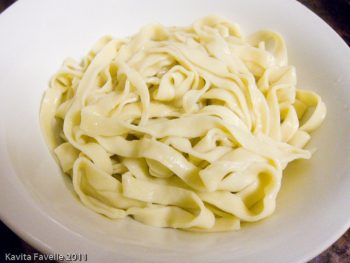 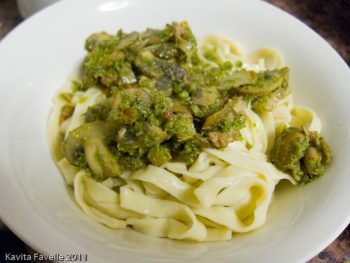 And it was good, if we do say so ourselves! 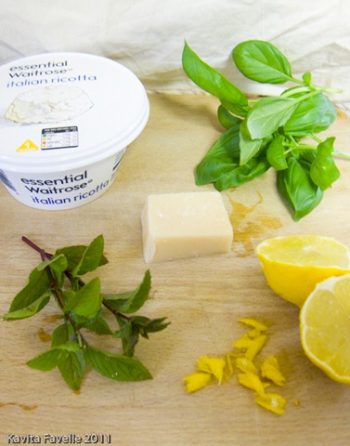 We served them with a simple lemon and basil butter – basil leaves wilted in butter with a little lemon juice stirred in. 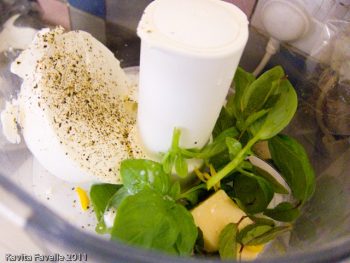 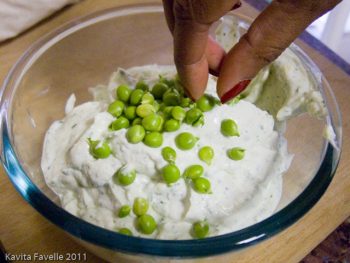 With the exception of the peas, which I left whole to add some texture, the other ingredients were combined in the Magimix. Next time, I’ll use the mixer to process the herbs, cheese, lemon zest and juice and then stir the resulting mixture into the ricotta, as I think this would result in a thicker textured mixture. The peas were lightly stirred in last.

I went by taste when making the mixture but you can see my approximate quantities in the photo above. 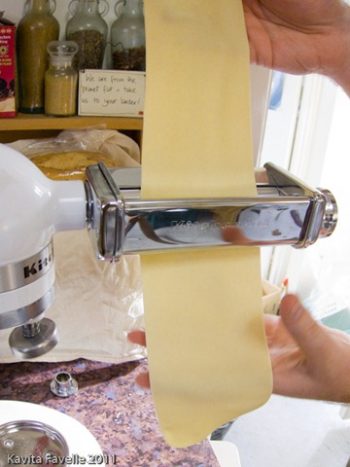 We should have cranked the pasta into thinner sheets but were worried that we’d find it hard to handle. The ravioli were delicious but certainly not as thin and delicate as the ones you find at posh restaurants. Still satisfying though! 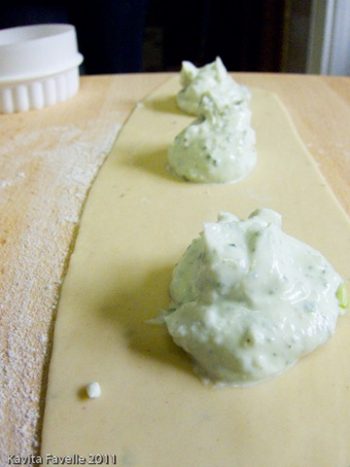 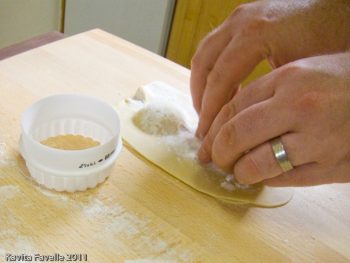 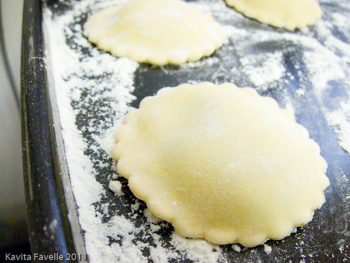 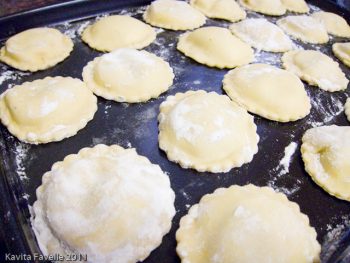 Finding enough work surface to lay out the pasta and make the ravioli proved a challenge.

The filling being a little too soft made it hard to feel whether or not one had trapped any air bubbles inside the parcels. A firmer mixture would make it easier to push out the bubbles on sealing, I think.

But none of the ravioli popped open on cooking. 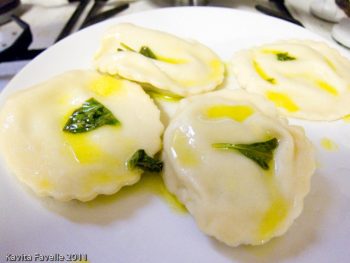 The finished dish was pretty darn good. Pete found our filling a touch too lemony but my sister and I liked the citrusy kick.

For a great plain pasta dough recipe, see this post.

Next time, we may vary the pasta dough recipe, adding in some spinach or beetroot or other colouring and flavouring ingredients. Any recommendations?

Please leave a comment - I love hearing from you!8 Comments to "The Satisfaction Of Home Made Pasta"