Those who cannot remember the past are condemned to repeat it

I have always had an interest in World War Two. Not a Boy’s Own fascination with military manoeuvres, tanks and planes or playing soldiers, but from a historical, political and people perspective.

At school, history was one of my favourite subjects. I never much cared for learning about British monarchs – William the Conqueror, the Tudors and the Church of England, the Stuarts and the Parliamentarians (though I love the term “Roundheads”) – but as soon as the subject turned to the 20th Century, and I could clearly trace a line between historical events and the current world, I perked up and paid attention.

Luckily both my school and sixth form chose modern history curriculums so history lessons were a pleasure.

I loved learning about how so many disparate happenings in different corners of the world were interconnected and how they shaped the current global balance of power, the development of current political systems, the values, belief systems and cultures of people in different parts of the world.

And I was sobered by the many stories of war and oppression and what men (as a species) can do to each other.

WW2 was of particular interest to me. Our closest family friends (adults and children both) were a Jewish family. The father had come to England as a very young boy when his father made the decision to abandon their lives in Germany, after his sister was attacked. Other family members chose to stay behind and suffered the consequences. How this came to happen was something I wanted to understand.

Anyone studying WW2 could not fail to be drawn into tale of the Battle of Britain and the role of the RAF.

The Battle of Britain 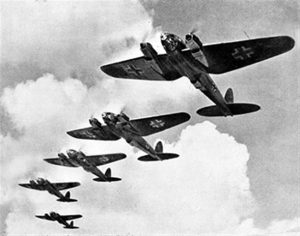 The Battle of Britain is the name given to the air campaign waged by the German Luftwaffe (Air Force ) against Britain during the summer and autumn of 1940.

The name came from Winston Churchill’s “finest hour” speech which he delivered to the House of Commons on 18 June 1940. He said:

“What General Weygand has called the Battle of France is over. I expect that the Battle of Britain is about to begin. Upon this battle depends the survival of Christian civilisation. Upon it depends our own British life, and the long continuity of our institutions and our Empire. The whole fury and might of the enemy must very soon be turned on us. Hitler knows that he will have to break us in this island or lose the war. If we can stand up to him, all Europe may be freed and the life of the world may move forward into broad, sunlit uplands.”

Towards the end of May, British, French and Belgian soldiers were evacuated from Dunkirk. Although it was hailed as a great success (and as an evacuation, it was certainly miraculous), it was, in the words of Churchill, “a colossal military disaster”, with troops completely cut off by the German army during the Battle of Dunkirk. As well as loss of life, Allied troops had to abandon all heavy equipment and vehicles; 9 Allied destroyers were sunk and many more sustained heavy damage.

A few days later, the French Prime Minister, Reynaud, resigned and was succeeded by Marshal Philippe Pétain who immediately requested an armistice with Germany. Thus the Battle Of France was officially over on 22 June 1940 when the armistice was signed.

Hitler believed Britain would soon come to terms (negotiate peace) too and focused his attentions on planning an invasion of the Soviet Union. However, Winston Churchill had just become Prime Minister and flatly refused to consider an armistice with Hitler.

Hitler’s military advisors told him that an invasion of Britain should only be contemplated as a last resort, and only then with full air superiority. The Royal Navy was in vastly better shape than the Kriegsmarine (Germany Navy) following the Norwegian Campaign and the continuing Battle of the Atlantic.

Nonetheless, in July, Hitler ordered his forces to create a plan for a land operation against England in mid-September. Part of these plans included the directive to bring about the preconditions that would make such a landing in England possible – an English air force weakened to the extent that it could no longer muster any real resistance to the German invasion.

For Hitler’s invasion plan to succeed, the RAF had to be neutralised beforehand.

From July 1940 the Luftwaffe targeted shipping convoys in the Channel and coastal shipping centres.

A month later, the Luftwaffe shifted to attacking the RAF Fighter Command in an attempt to gain air superiority. Initially, the Germans bombed fighter airfields and then began to also target aircraft factories, though not very effectively – British fighter production continued at an increasing rate throughout the campaign.

In August, general industrial targets were also attacked and the use of night raids increased. Airfields were still key targets.

On the 24th of that month, following a raid on the Thames Haven oil refinery, some of the German bombers dropped bombs on residential areas in North and East London. The British retaliated with a bombing raid on Berlin the following night. The Luftwaffe high command were furious, and Hitler too. He demanded further attacks on major British cities, by day and by night.

The Blitz, as we called it in Britain, began on the evening of September 6th.

Although RAF and industrial targets were still attacked, the additional focus on major British cities reduced pressure on the RAF airfields. Of course, it resulted in a great many Civilian deaths and vast amounts of destruction of property.

The fortitude and resilience of Brits during the Blitz is a whole other topic; full of both harrowing and uplifting tales of courage and loss.

Incidentally, whilst Hitler certainly didn’t come up with the tactic ascribed to Blitzkreig (lightning war) – finishing a war quickly and decisively by deployment of a fast and overwhelming military force – the term assumed significance through Nazi propaganda journalism from where it was quickly adopted by Allied journalists following the invasion of Poland in 1939. 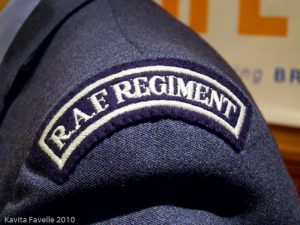 On the 20 August 1940 Churchill made another speech to the House of Commons and the British people in which he said:

“The gratitude of every home in our Island, in our Empire, and indeed throughout the world, except in the abodes of the guilty, goes out to the British airmen who, undaunted by odds, unwearied in their constant challenge and mortal danger, are turning the tide of the World War by their prowess and by their devotion. Never in the field of human conflict was so much owed by so many to so few. All our hearts go out to the fighter pilots, whose brilliant actions we see with our own eyes day after day… “

To this day, “The Few” continues to be the nickname for the airmen of the British RAF who fought in the Battle of Britain.

These aircrews comprised not only Britons but many from Britain’s former colonies, particularly New Zealand, Canada, Australia and South Africa, exiles from conquered allies including France, Poland, Czechoslovakia and Belgium and a handful of others too.

The RAF was founded in 1918, during the First World War, when the Royal Flying Corps and the Royal Naval Air Service were merged. Although it was relatively quiet during the inter-war years, it underwent rapid expansion prior to and during WW2. During the war, it’s ranks were hugely bolstered by recruits into the RAF Volunteer Service.

Aircraft production kept pace with demand, despite the raids by German bombers.

Towards the start of the Battle of Britain, there were almost two RAF pilots in the RAF to each aircraft. But not all of these were fully trained fighter pilots. Fighter Command struggled to assign sufficient numbers of fighter pilots to each squadron to maintain operational strength in the face of casualties and allow for pilot rest, recovery and leave. Many pilots were also assigned to staff positions, since RAF policy insisted that only pilots could make staff and operational decisions.

Despite the lack of full training, the RAF aircrews went into battle against an enemy air force that was able to muster larger numbers of more experienced fighter pilots, many of whom had fought in the Spanish Civil War and were well trained in aerial gunnery and fighter combat tactics.

Grim determination and stamina won through. The Luftwaffe experienced a faster decline in operational strength, due to a lack of sufficient pilots, as the battle progressed than did the RAF.

In October, after a number of British victories in individual skirmishes in the skies, Hitler postponed the invasion until Spring 1941 and the regular bombings of Britain ended, though there were a limited number attacks after this time.

It’s easy, reading this narration of events, to miss the personal stories of courage, determination, loss and sacrifice made by the men and women of the forces during the Battle of Britain and WW2 as a whole.

I urge you to do some reading on your own and learn about what it was like to live through such a time.

An Celebration on the 70th Anniversary of the Battle of Britain

A few weeks ago, I was invited to meet members of today’s RAF at an event instigated by Henrietta Lovell of the Rare Tea Company and hosted by the Coach and Horses pub. 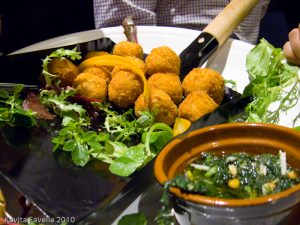 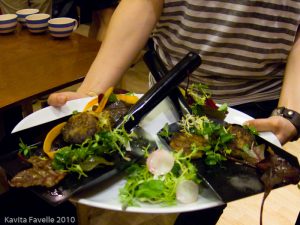 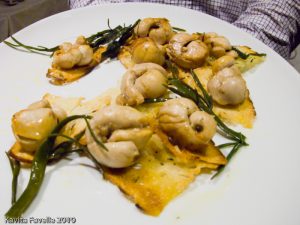 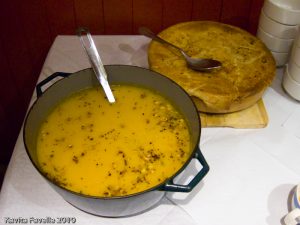 The pub laid on some WW2-inspired food (including a marvellous rabbit pie). 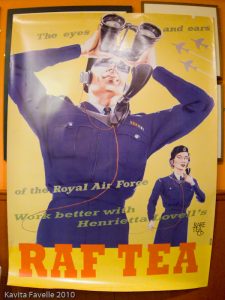 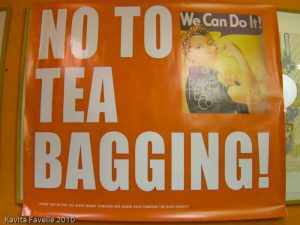 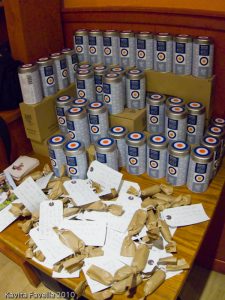 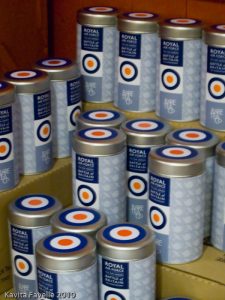 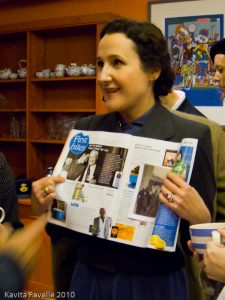 Henrietta provided tea and tea-based cocktails (and some wonderfully amusing posters). The tea in question was her specially blended Royal Air Force Tea, which she first created for Terry Clark, a veteran of the Battle of Britain. 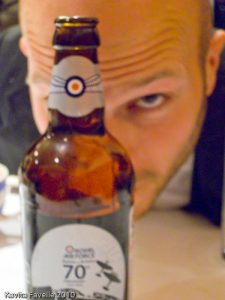 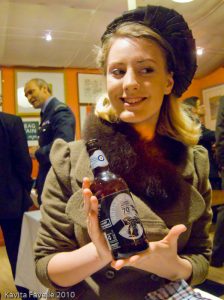 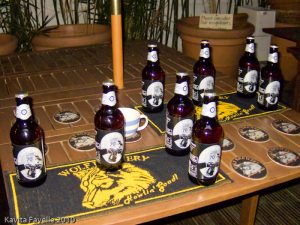 The Wolf Brewery provided beer brewed especially to commemorate the Battle of Britain. (Read Pete’s review of the beer).

It was a lovely evening and gave us the opportunity to talk to men and women serving in the RAF today, though none of the veterans from the Battle of Britain were present on this occasion.

Henrietta is donating 10% from each sale of her Royal Air Force Tea to the RAF Association’s Wings Appeal.

Wolf Brewery are donating 10 pence from each bottle of any of their 4 Battle of Britain Beers to the same association.

I believe it’s important to give thanks to all those, the many and the few, who sacrificed their lives for us during the wars (and to spare a thought for those who continue to do so through peaceful times and times of conflict).

You might think, hang on, your family didn’t emigrate to Britain until the late 1960s! What do you need to be thankful for? But, of course, the nation we are today (and the region and world as a whole) owes a huge debt to those who fought back then. Because I am proud to be British, I am grateful to those who defended it then.

Join me in remembering and giving thanks.

Please leave a comment - I love hearing from you!14 Comments to "Remembrance Day"