Now and then we drive past enormous pig farms. Great expanses of mud, not a hint of greenery in sight, rows upon rows of corrugated iron pig huts. and lots and lots and lots of fat pink pigs as far as the eye can see. Not a bucolic scene! 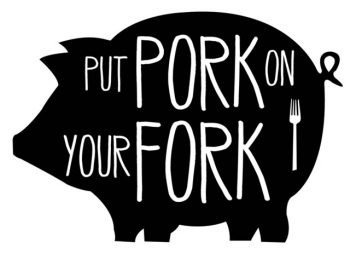 That is not what Jimmy’s Farm, which I was invited to visit as an introduction to the Put Pork On Your Fork campaign, is like at all. Unlike those barren mudscapes, Jimmy’s Farm is the very image of a rural idyll. 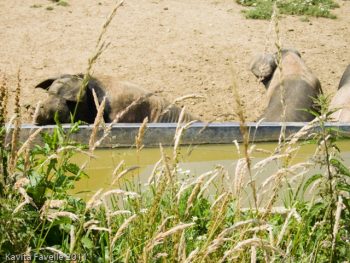 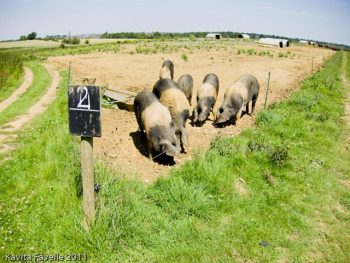 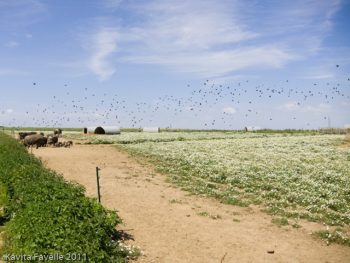 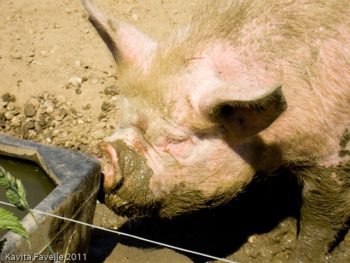 Jimmy Doherty came to the nation’s attention in 2002 when BBC 2 aired a series called Jimmy’s Farm, featuring the story of Jimmy setting up a new business breeding rare pigs at a farm on the outskirts of Ipswich, Essex. As he had no previous hands-on experience of farming, the audience identified with the challenges he faced. Two further series about the farm followed. I missed these, but really enjoyed the episodes I caught of Jimmy’s Food Factory, where he learned more about common supermarket products by having a go at making them himself. 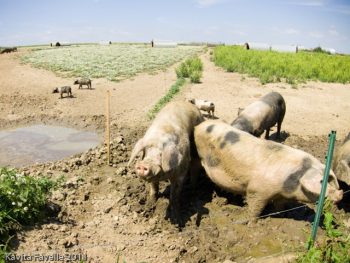 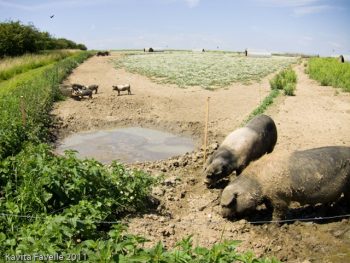 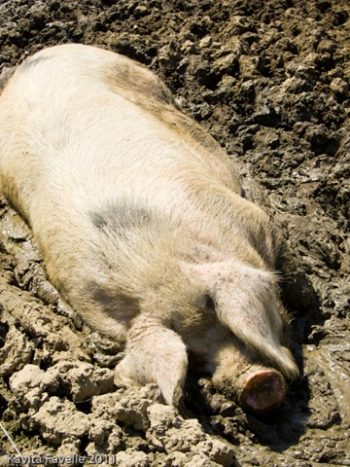 He uses radial paddocks – wedge-shaped pens in a cartwheel around a central area from which one can easily move the pigs from one pen to another – and houses a small group of pigs in each one, allowing them to socialise and giving them plenty of space to snort and snuffle, wallow in the mud and munch not only on their regular deliveries of feed but also on the fresh clover and other greenery that carpets the ground.

It’s the antithesis of intensive farming.

Jimmy is a natural ambassador for the Put Pork On Your Fork campaign, which aims to encourage us Brits to eat more pork. Whilst we do love our bacon, roast pork with crackling and fat pork chops, not to mention Chinese or American style ribs, we don’t really make great use of the rest of the pig and there are many other great cuts we can use. 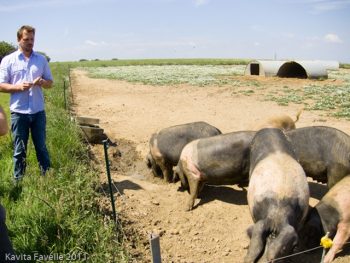 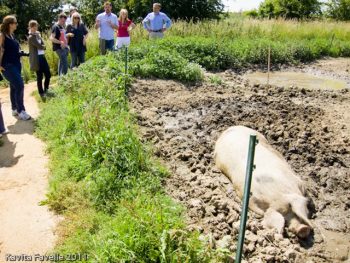 As Jimmy told us on the day, whilst we often remark that a dog is man’s best friend, it more commonly used to be said about the pig which is not only a sociable and intelligent animal but one that can be trained to root out truffles before providing many very fine meals indeed.

“Everything is edible except for the squeak!”

In addition to teaching us how to make better use of pork, the campaign also invites us to show our support for British pig farmers by buying British. 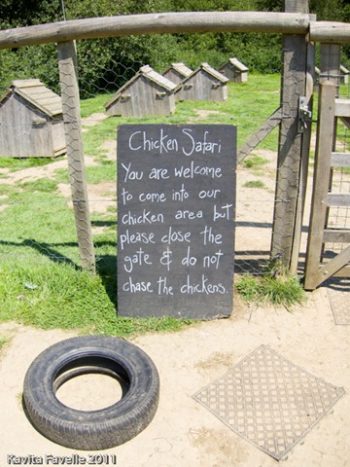 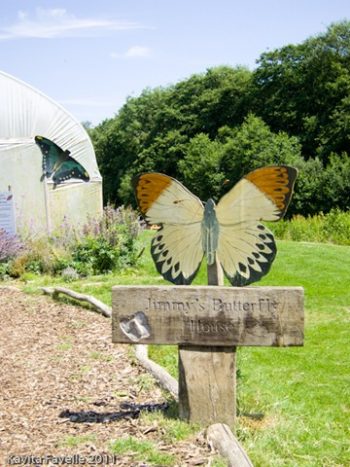 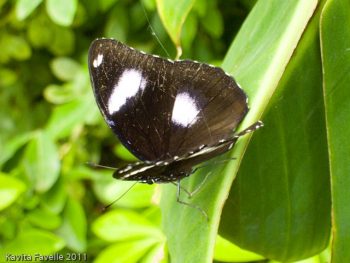 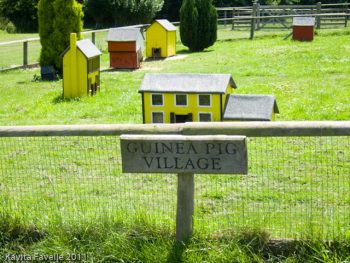 After a lovely walking tour of Jimmy’s Farm, admiring the pretty paddocks of happy pigs and enjoying the sunshine (the pigs and us both), we meandered through the rest of the attractions including Jimmy’s butterfly house (he used to be an entomologist), guinea pig village, ferret enclosure, chicken safari and pretty gardens.

Central to the visitor attractions is a huge converted barn which houses a deli farm shop and a spacious restaurant, where we enjoyed a pleasant lunch.

Everything But The Squeak

The most useful part of the day, for me, was the butchery demonstration and talk by Jimmy and his butcher friend Joe Collier, from Berkhamsted. 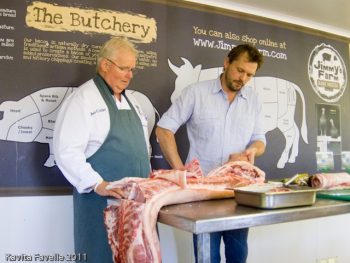 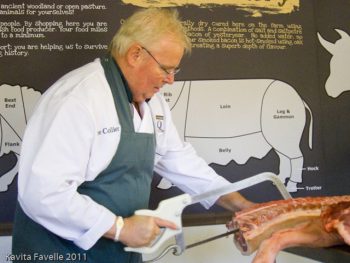 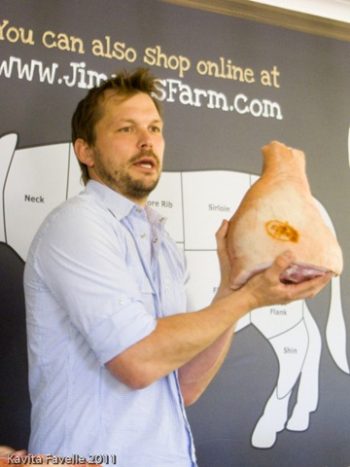 To our surprise, the pork Joe was butchering was a deep, ruby red – more akin to the colour of beef than pale supermarket pork. Jimmy’s rare breed pigs get a lot more exercise than intensively farmed ones and he raises them for 6 months before sending them to slaughter. (Larger intensive farms dispatch their pigs much younger). Plus the breeds themselves produce great, tasty meat!

Jimmy pointed out that one of the reasons some of the rare breeds had fallen out of favour was the dark black hairs on their skin. Modern domesticated pigs have pale white hairs, hard to notice against the skin even if a few hairs happen to remain. These days, customers find the occasional black hair that is left on the skin abhorrent, even though it’s just the same as a white one!

Sadly, I didn’t think to make notes so I don’t remember all the great advice we were given by Joe, but first and foremost was to forge a strong relationship with your butcher to help you make your pork budget stretch further by recommending suitable alternative cuts of pork for your needs.

If only I had a local butcher, I’d be delighted to do so!

Most meat loving food lovers have long, long known about belly of pork, so much so that it (like lamb shanks and feather steak) is no longer as cheap a cut as it once was.

Chump end is also great for slow roasting or can be chopped into cubes and skewered for the BBQ.

Sheet ribs are apparently often discarded by butchers so you should be able to get these very cheaply, or even free, if you’ve established that good relationship with your butcher that I mentioned earlier!

The same goes for flare fat – highly saturated fat found in the abdominal cavity, surrounding the kidney, liver and other organs. It’s considered the highest quality lard available and is particularly good for pastry. Pete and I have a huge jar of pig fat rendered from a pub hog roast and we use it for roasting potatoes – a great alternative to goose fat!

Here’s a short video, from Put Pork On Your Fork, of Joe and Jimmy running through the various cuts and how to use them.

Why is it a big deal to buy British? I did some research on getting home and this is what I learned:

Firstly, British pig farming is in crisis, with pig farmers often making a loss for every single pig they sell, leading many farmers to give up. Why does this happen? One reason is because supermarkets have such strong buying power that they can bully producers to sell at very low prices. Farmers that don’t accept these prices will simply lose business to imports from overseas.

But how can overseas pig farmers produce pork at much lower prices?

The answer is simple, the welfare standards for their pigs and the quality of their pork are simply no match for British standards and British pork.

To give you an example, here in the UK, we have banned the use of farrowing crates. As Chris Wildman of Paganum Produce explains, “farrowing crates do not allow a sow to turn round or move much at all. Intended to protect piglets from crushing but often misused in intensive factory farming units.” Danish intensive pig farming methods (also used in other countries) enable the producers to make cheaper pork products which UK supermarkets snap up.

Whilst we don’t use farrowing crates in the UK, some producers certainly still use intensive farming practices. David Thomas of Chalk Newton tells me that the demand for “next to nothing prices forces farmers to produce the pork in as quick a time as possible to increase product output. To achieve this the farmer feeds animals very high protein feeds to get the animal to the desired weight as fast as possible. Very often these feeds also include medications including antibiotics to prevent illness. Give anything antibiotics on a regular basis (for no real reason) and you’re asking for trouble. These pigs will normally get to the desired weight in half, or less than half the time a free range “high welfare” animal. More quantity less quality.” 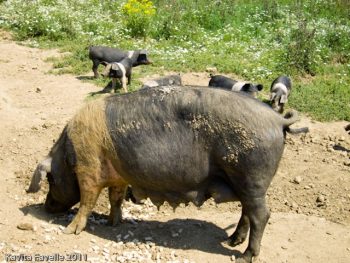 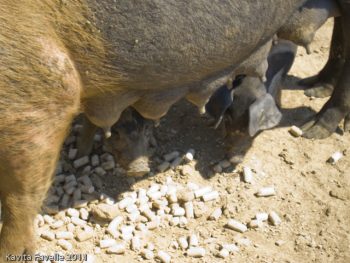 Rearing free range pigs outdoors (sometimes referred to as extensive, as opposed to intensive, farming) has its drawbacks. Sow aggression just before and after farrowing (giving birth) can lead to injuries of the sows themselves and also to infant mortality. The latter is also a risk when sows are not restricted in crates and can accidentally crush one or more of their off spring. Additionally, it takes longer for piglets to grow on natural feeds.

The pay off, of course, is that the pork is so much better than the insipid intensively farmed stuff.

What should you look for when buying pork?

In a supermarket, look for a Red Tractor assurance label. Whilst this doesn’t require pigs to be free range it does mean that the animal has definitely been reared in the UK (and can be traced back to the farm of origin) and to an accredited higher level of welfare (free from hunger and thirst, free from discomfort, pain, injury or disease, free from fear and distress and free to express normal behaviour), that rigorous food safety, hygiene and vermin control standards have been met, that farmers have been required to look after the British countryside, take care of wildlife habitats and avoid pollution of streams and rivers and that all staff and contractors are properly trained and competent in achieving the required standards of production. There are also regulations covering medication, vaccines and feed as well as handling of deceased animals and livestock transportation.

Of course, Red Tractor is a voluntary accreditation and one that farmers need to pay for. Many of the smallest, independent farmers do not participate in the scheme but follow the same or higher standards. Ask them about their standards before buying from them directly.

Look for free range pork. The pigs will have been fed in a natural way and spent all (or most of) their life outdoors. They will not have been fed high protein feeds or given needless antibiotics (medicated only when required not as a catch all or preventative). And they will often have been reared for longer before they are considered ready.

If you have a good local butcher, ask them for free range, rare breed pork. They should be able to tell you about the breed, the farm of origin and give you lots of extra advice about which cuts are suitable for which cooking techniques.

You can also buy directly from the farm.

Chris Wildman of Paganum Produce rears Oxford Sandy & Black pigs, a breed known for having a friendly and docile temperament, being hardy, and producing excellent pork & bacon. His rare breeds are free range, roaming the beautiful Yorkshire Dales by day, and are Red Tractor assured.

I’ve made a promise to myself to be more adventurous about buying and cooking pork and I’ll be sharing some pork recipe ideas in coming weeks.

I hope you’ll join me in putting pork on your fork. And don’t forget to buy British to support our pig farmers. 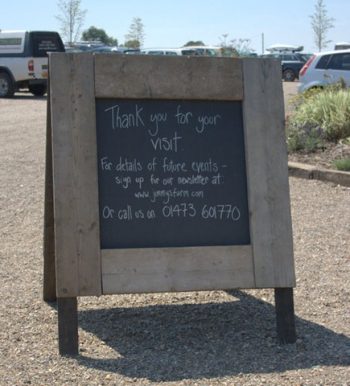 Please leave a comment - I love hearing from you!11 Comments to "Put Pork On Your Fork"