Similar dishes of grated potatoes shaped into a pancake and fried exist right across Europe from North to South, East to West. Some, like these Eastern European latkes use egg to bind the ingredients, whereas others, such as rösti and hash-browns don’t, but the love of grated fried potato is very widespread.

In this simple recipe from Amber & Rye: A Baltic Food Journey by Zuza Zak, latkes are served with smoked Polish-style sausage and spinach to create a pleasing dish perfect for a light meal. 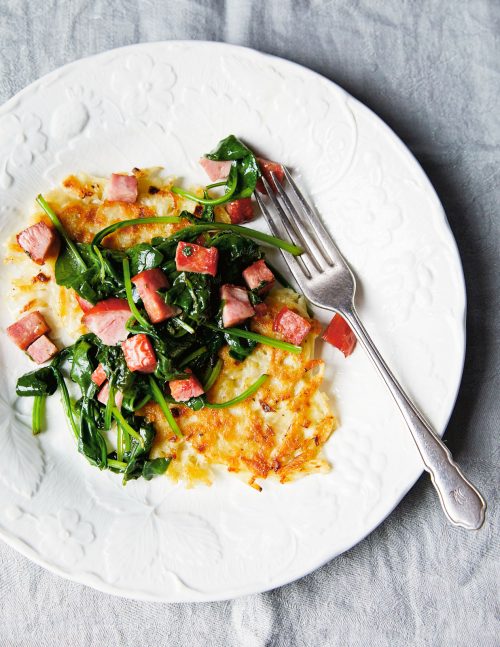 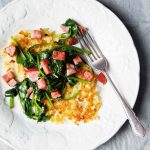 Potato-hash pancakes – or latkes in Yiddish – are known as a traditional part of Jewish cuisine. It’s not surprising, therefore, that they are also commonplace in Lithuanian cooking, since Lithuania (like many Eastern European countries) had a huge Jewish community prior to World War II. For hundreds of years, recipes, ingredients and techniques were shared in a way that makes tracing their origins impossible; luckily, it’s also unnecessary. Likewise, I find it unnecessary to peel the potatoes unless they are looking a bit worse for wear. Some may find the kiełbasa sausage a surprising addition here, given the Jewish name of this dish, but it’s delicious! You can, of course, use kosher sausage instead, if you prefer.
Servings 4 servings
Author Zuza Zak

Find out more about Baltic food in our review of Amber & Rye: A Baltic Food Journey by Zuza Zak.