As a cheese and bacon addict, I often have leftover cheese in my fridge, not to mention the stash in my freezer. There’s often half a tub of sour cream or crème fraiche hanging around too, a few rashers of bacon leftover from a weekend brunch and half a bottle of mustard languishing in the cupboard.

And even though our harvest of home-grown potatoes was the lowest for several years, there are nearly always potatoes lurking in a dark corner of the kitchen.

So this pommes de terre Braytoises recipe adapted from Diana Henry’s Roast Figs, Sugar Snow book was a perfect choice to counter the cold weather outside, be frugal with leftover ingredients and try something from a new cookery book too!

We adapted the recipe to 2 people, changing some of the ingredients and instructions to suit us better.

We really enjoyed these potatoes, they made for a very comforting and delicious week day dinner and were very easy to make. We so often have cheese, bacon and sour cream or crème fraiche left over, we have already made these a couple of times and will certainly be making them again soon. 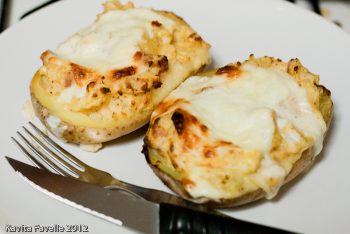 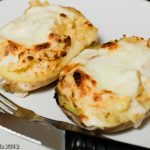 We used left over bacon, fried in a pan, so we added the bacon fat to the mix too.