I seldom make it to soft-openings, too unorganised to secure a booking, and that’s assuming I’ve even managed to remember the dates.

But José Pizarro‘s new restaurant doesn’t take bookings. So my plan to be there just before its noon opening time for Friday lunch pays off.

Pizarro is just a few hundred metres down from the hugely popular sherry and tapas bar José opened earlier this year. The simple, delicious dishes there wowed my taste buds but I found the stools awkward with my bad back and hips, and standing equally uncomfortable. 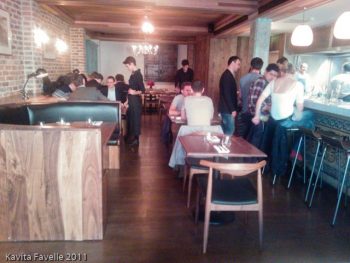 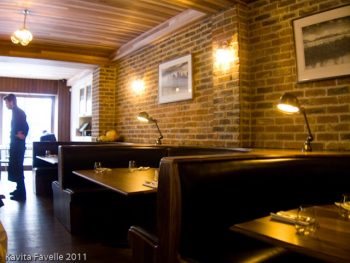 Pizarro is not only a lot more spacious, it has a range of comfortable seating options from bar stools to banquettes, from long tables with benches to tables and chairs. 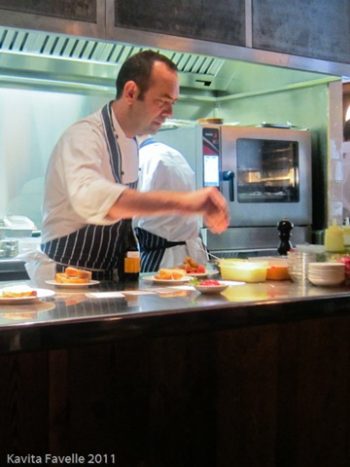 Arriving so early means we have the pick of the place, and José leads us towards a table for two right by the kitchen pass. Throughout our meal we enjoy watching José and his team assemble our dishes, before elegant staff dressed all in black whip them away to the diners. 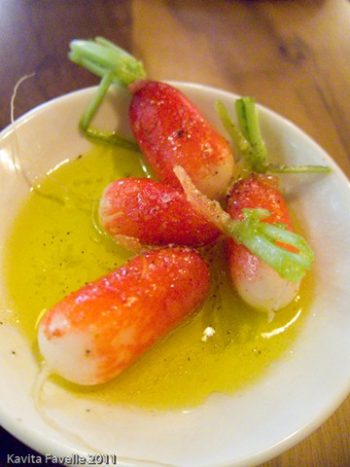 Menus in hand, we’re served crunchy salted radishes in a peppery olive oil with a slice of bread each to dip into the oil. 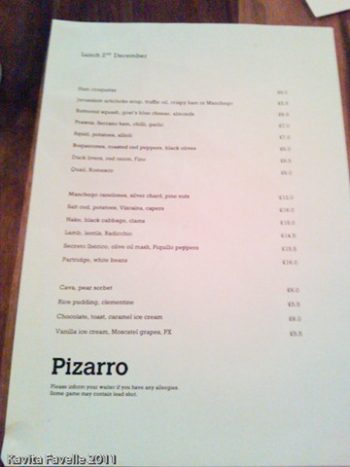 There is much to appeal and we have plenty of time, so we start by ordering ham croquetas (£6) and prawns, serrano ham, chilli, garlic (£7). 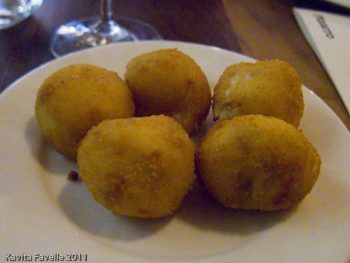 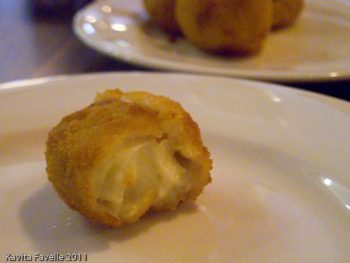 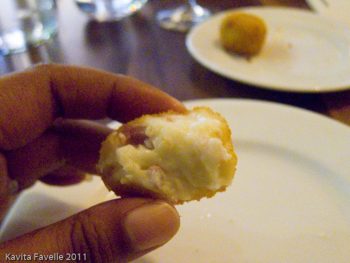 It’s hard to convey just how good these hot balls are; crisp coating surrounds a shockingly creamy cheese filling with tiny chunks of ham, so soft that they melt away in the mouth. My only niggle here is that I’d like just a tiny bit more ham… the pieces in these are few and far between, though they still don’t last long! 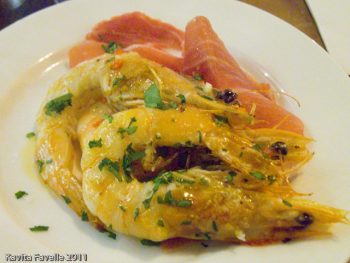 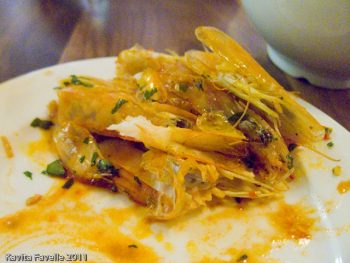 As I’m a chilli wuss, I’m very happy that the prawns pack more of a garlic hit than a chilli one. The tails are partially peeled, meaning I can simply pull of the head (and have a good suck, oh yes!), and then use the tail as a handle to eat the prawn. Perfectly cooked with lots of flavour. I confess I’m bemused by the menu pairing of prawns and ham until I try it; the salty ham is a wonderful balance to the sweet garlicky prawns. 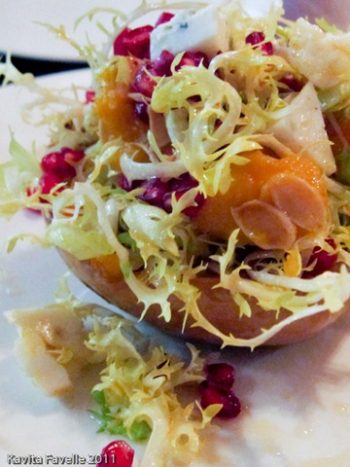 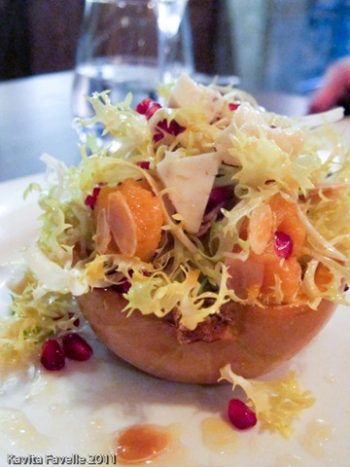 The description of butternut squash, goat’s blue cheese, almonds (£6.50) doesn’t do this beautiful warm salad justice. What arrives is half a partially-hollowed baby squash which is used as a bowl for a salad of chunks of squash, leaves, cheese, and almonds with a simple tasty dressing and pomegranate seeds for both beauty and sweet tart bursts of flavour. I think it’s fair to say I’m surprised by how much we both love this dish. 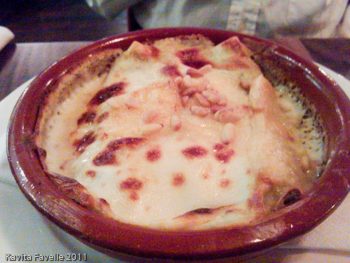 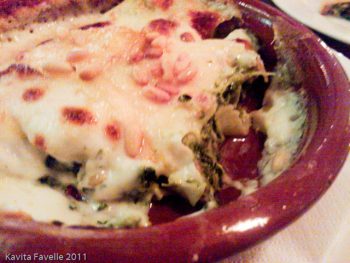 Manchego canelones, silver chard, pine nuts £12) needs our waitress’ input to inform us that canelones is pasta. It’s not until the dish comes that I twig it’s the Spanish version of Italian cannelloni – large pasta tubes. These are filled with silver chard and pine nuts in a creamy cheesy sauce. A simple, comforting and filling dish. 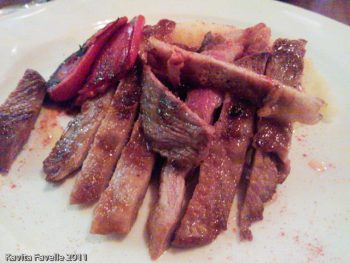 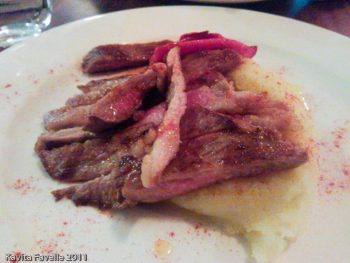 Our other main is the secreto Ibérico, olive oil mash, piquillo peppers (£15.50). The presentation of this dish verges much farther towards the rustic than the rest of what we’ve been served; it’s not the most attractive plate, visually. But the pork has a great depth of flavour and the lightly browned fat gives it some extra texture. To my surprise, the flavour is very bacon-like, though I don’t think the meat has been cured at all. The mash does little for me, personally. The peppers give a little sweetness and colour to the dish. 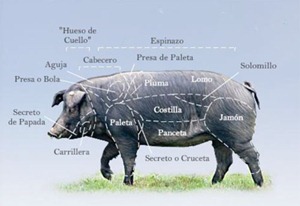 Incidentally, whilst the waitress advises that secreto is a cut of pork, it’s not until I get home and Google that I’m able to find out about the actual cut – and as is often the case, it doesn’t translate to how the British butcher their pigs. I think it’s similar to what we call skirt in beef, and is described by Bellota Importers as hidden between the shoulder, ribs and fatback.

Ibérico pork, if you’ve not come across it before, comes from the famous black pigs of the Ibérian peninsula. The pigs live freely in wooded pastureland that has four different varieties of oak trees, providing lots of acorns for the pigs to eat. These, and the breed’s natural propensity to accumulate fat under its skin, give the meat it’s distinctive taste. 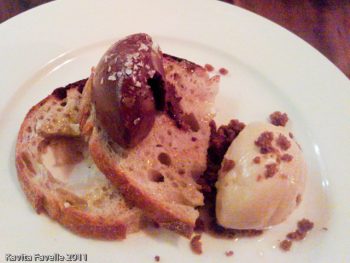 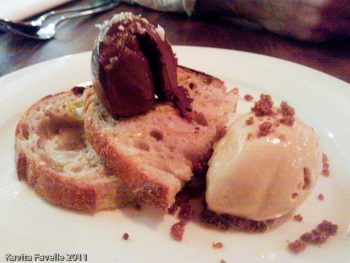 After three starters and two mains, we’re slowing down! We order just one dessert to share, the chocolate, toast, caramel ice cream (£6). Soft rich chocolate mousse is served on crunchy toast with a light caramel ice cream on the side. Sea salt lifts the mousse and caramelised sugar lifts the ice cream. I love the texture of the toast against the soft mousse and ice cream, though a knife would have made it easier to cut through the hard crust.

Another thing I should mention, though I’m not a big drinker, is the reasonably priced drinks menu. Between us we enjoy a glass of Cava and one of Pedro Ximinez (can you guess which one is mine?), both very reasonably priced at £4.50. Often it’s the drinks that ratchet up the prices but you can certainly stick to a budget here, should you choose.

A small carafe of still water, left on the table for our convenience, is regularly and unobtrusively topped up by friendly waiters.

José Pizarro serves up food that is simple yet delicious, allowing the flavours of very good quality ingredients to speak for themselves, in a way that only the best chefs have the confidence to do.

Personally, I’m wowed more by the starters and dessert than the mains, and next time I visit I’ll likely order a larger selection of those to share, skipping the mains entirely.

As well as watching the kitchen team at work, we sit and linger as other guests arrive and leave again. There’s a huge buzz to the place that’s very uplifting.

Please leave a comment - I love hearing from you!12 Comments to "Pizarro Wows Again on Bermondsey Street"