Last week saw me doing more baking than drinking, as I found myself entering the Great Chocolate Cake-Off taking place at Chocolate Unwrapped. Although I thoroughly enjoy baking, in recent years it’s tended to be more bread based, so the prospect of coming up with a chocolate cake worthy of being eaten by anyone other than my nearest and dearest – who are obviously honour-bound to tell me how delicious it is – was a little alarming. As a result, I was a little less than relaxed about the whole affair and even ended up making test cakes to make sure I wasn’t going to embarrass myself too much. 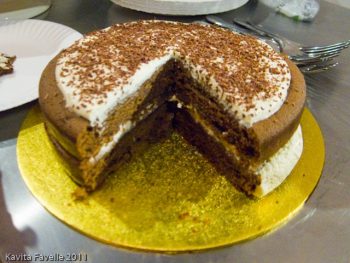 I knew roughly what sort of cake I wanted to make from the start; something along the lines of a Devil’s Food Cake, which is wonderfully chocolaty and dense without being heavy. But I wanted to bring a little something extra to the party and given my day-blog, beer seemed the obvious thing to add. Everything tastes better with beer.

The next problem was the basic Devil’s Food; it turns out that there are more versions of this cake than there are recipe books, none of which quite matched up to how I remember my mum’s version. Having culled all the recipes that involved coffee – which would have been too much with beer as well – I did my normal trick of taking the easiest bits from various sources and normalising it to easier-to-measure quantities. I’m nothing if not a lazy cook.

Having settled on the base recipe, I had to pick my beer. It clearly had to be a dark sweet beer, which really meant a porter. Given that they make the best porters I know, I had initially planned on something from the Kernel Brewery but I have to travel across London to get hold of Kernel beer, so for my first test I made do with some Fuller’s London Porter. My chief taster confirmed that I was on the right path and demanded further cake. One trip to the Beer Boutique later and I had my small supply of Kernel’s Export India Porter. Despite being (in my opinion) a superior beer, it turned out to be less tasty in cake-form than the Fuller’s – sadly I was therefore forced to drink the Kernel instead. Life as a baker is sometimes hard.

When it came to the cake filling, I quickly realised that despite my personal addiction to butter icing, something lighter was required to avoid everything getting too heavy. Clearly it needed to be a bit sweet and beery, which pretty much meant the recipe wrote itself. Having the design talent of an aspidistra, I went for the traditional, village-fete look of ‘cream in the middle, cream on top’, which my less talentless wife suggested improving with some grated chocolate.

I set off to the show feeling pretty good; although the cake hadn’t risen quite as much as the test runs I knew it was tasty and it looked more like a ‘proper’ cake than most of my efforts.

Imagine my state of mind, then, when I walked into the kitchen and saw the other 15 cakes. They had spun sugar. They had frosting. They had tiers. They had cake stands for heaven’s sake. I had what looked like a naked chocolate victoria sponge on a bit of foil board left over from Kavey’s birthday party. I skulked off to wander around the show (well ok, I also popped over the road to The Rake for a swift half) and waited to pick up my 16th place prize.

The results were announce at 4:30 that afternoon, the top five being presented to the audience and discussed by the judges. I think it’s fair to say I was surprised when among the spectacularly crafted things of beauty that appeared on the judging table was my effort – looking, if truth be told, on the amateurish side in such company.

Still, from the kind comments of the judges it seemed my cynical attempt to get them drunk enough to vote me the winner almost paid off even if, in the end, I was beaten by someone who clearly knows how to make spun sugar rather than just how to eat it. Oh, and her sponge was (annoyingly) bloody tasty too.

So, if you want to know how to make my second-prize winning (ok, there wasn’t a second prize as such but you could tell they all secretly liked mine second best) Chocolate Porter Cake, here it is. 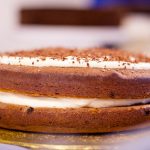 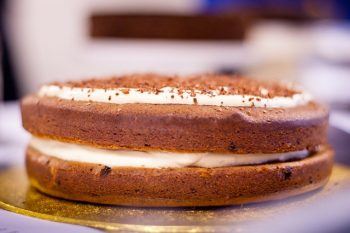 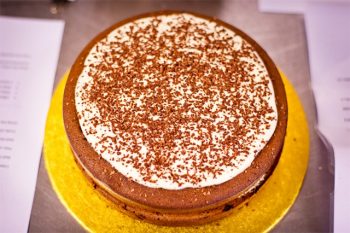 above images courtesy of Paul Winch-Furness

When discussing the five finalists, famous pâtissierand chocolatier Paul A Young said of my cake “the porter in this cake was *absolutely* beautiful… really intense, really moist… a cup of tea and a slice of that, a very big slice of that and you’d be on your way.”

Please leave a comment - I love hearing from you!11 Comments to "Pete Bakes: Chocolate & Porter Cake"