Peruvian food is one of the world’s original fusion cuisines, weaving together ingredients and dishes indigenous to the region with techniques and produce brought to Peru by Spanish conquistadores, their African slaves and subsequent waves of immigration from China, Japan and Europe.

Some foods that originated in Peru – potatoes, capsicum and corn – are now grown and consumed globally. Others such as ulluco tubers, kañiwa grains and lúcuma fruit are not widely known elsewhere. These and many other native ingredients have been supplemented in the Peruvian larder by meats such as beef, lamb, pork and chicken, many fruits and vegetables, herbs and spices, even nuts and refined sugar. 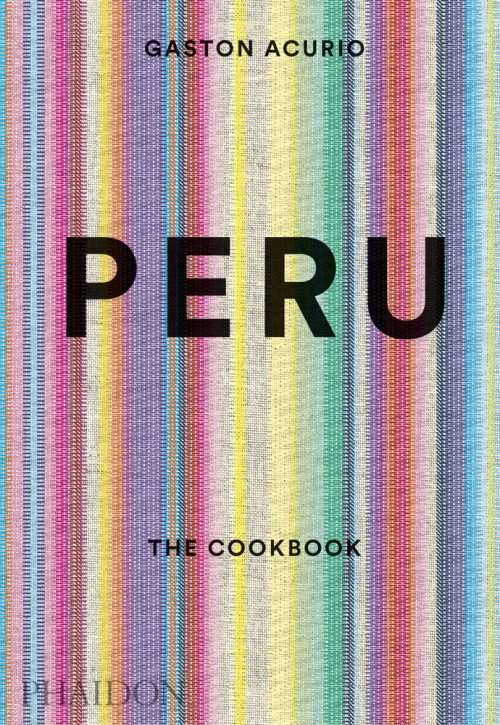 With so many influences, the cuisine could be considered a little daunting to cover in a single cookery book but Gastón Acurio is the perfect Peruvian to pull off this feat for Phaidon’s Peru: The Cookbook.

To describe Gastón as an acclaimed chef would be an understatement. He owns a slew of renowned restaurants in Peru and worldwide; he hosts a hugely popular television cookery show and has a loyal following on social media. Fellow Peruvian chefs credit him with creation of Cocina Novoandina – a modern take on Andean cuisine – and for being an enthusiastic ambassador for the food and culture of Peru.

In a book as colourful as the people and culture of Peru, Gastón narrates his personal journey and the history of Peruvian food before sharing over 500 recipes that represent the nation’s cooking. Many are accompanied by simple, attractive images.

Recipes are divided into nine chapters. First is Ceviche which includes Japanese-inspired tiradito; for ceviche the fish is ‘cooked’ by its citrus juice dressing; for tiradito a dressing is added to slices of raw fish just before serving, so the fish has no time to cook. Recipes include Arequipa-Style Shrimp, Chalaca-Style Tiradito and (Chinese) Ceviche Chifa, with pickled root vegetables and ginger.

Rice, Stir-Fries and Tacu Tacus is the chapter that most clearly shows the influence of immigration. Arroz con Mariscos (rice with seafood) has a clear basis in the Spanish dish from which it takes its name; Arroz Chaufa (fried rice) is one of the most popular Peruvian Chinese fusion dishes and Tacu Tacu, a dish of leftover rice, beans and spices formed into a patty and fried until there’s a crisp crust, gives a nod to its Afro-Peruvian origins.

For heartier dishes, Stews, Chilies and Roasts fit the bill. As well as a broad range of one pot dishes, this chapter provides four variations of pachamanca, a traditional celebratory dish of marinated meat and vegetables baked in underground ovens.

Many of the recipes in Desserts & Sweets are of clear Spanish origin, including Alfajor (sweet biscuits sandwiched with dulce de leche), rice puddings and Crema Volteada, a baked caramel custard. Local ingredients such as lúcuma fruit, purple corn and yucca roots also make an appearance.

In the Drinks chapter there are plenty of recipes comprising Pisco – the ubiquitous Peruvian brandy – including cocktails, punches and ginger-ale Chilcanos. For those looking for soft drinks, Cremolada, a frozen granita-like drink, is the perfect summer cooler. For the unusual, make a traditional Chicha de Jora (corn beer ) or a drink featuring camu camu berry juice.

Last is a chapter of Basic Recipes for marinades, condiments, pastes and sauces followed by a handy glossary for the many unfamiliar ingredients referenced throughout the book.

Peru: The Cookbook is sure to become a classic reference work to Peruvian cuisine; a comprehensive guide suitable for home cooks and experienced chefs alike.

Recipe from Peru: The Cookbook

Kavey Eats received a review copy of Peru: The Cookbook by Gastón Acurio from publisher Phaidon.