We received a review copy of this book from publishers Hardie Grant.

I’m a little behind the curve getting my hands on this beautiful cookbook. On the Himalayan Trail: Recipes and Stories from Kashmir to Ladakh by Romy Gill was published by Hardie Grant in April since when it’s received great feedback from keen cooks.

Gill, who was awarded an MBE in 2016, is a British-Indian chef, food writer and broadcaster best known for her restaurant Romy’s Kitchen (based in Thornbury and open from 2013 to 2021), her previous book Zaika (which featured Vegan recipes from India), her food writing (which has appeared in both national and international publications), and her appearances on a range of TV and radio shows (including Ready Steady Cook, Saturday Morning, Sunday Brunch, Celebrity Masterchef, and Radio 4’s The Food Programme).

Born in India, Gill grew up in Burnpur, West Bengal and learned to cook from her mother. After moving to the UK in 1993, she began hosting delicious dinner parties for friends before running cooking classes and demonstrations, and launching her own range of sauces, pickles, chutneys and spice mixes. In her restaurant, which we visited in its last few months before it closed, Gill served her own style of Indian cooking in which she combined the ingredients, spices and cooking techniques of her childhood with British ingredients and ideas. 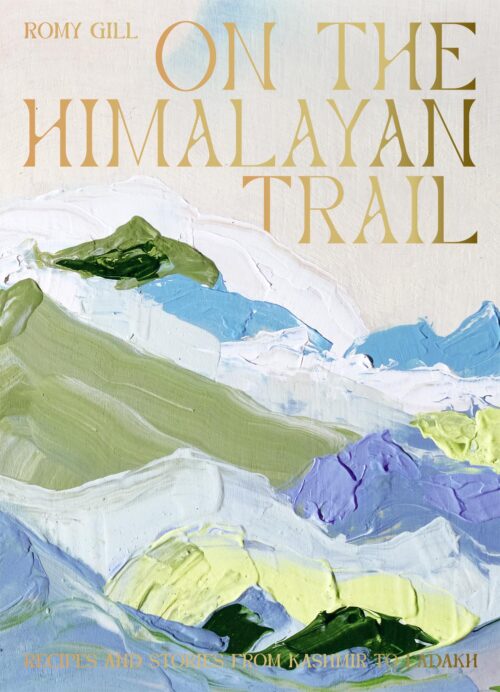 In her latest book Gill shares the food and stories of Kashmir and Ladakh, through personal essays of her experiences when visiting the region, beautiful photography, and plenty of recipes. Unlike Zaika, this book covers meat, fish and vegetables, so it best suits omnivores looking to expand their South Asian cooking repertoire.

Looking through the recipes, you’ll find plenty in common with dishes and cooking methods from Northern Pakistan and Northern India, courtesy of shared influences from Mughal, Persian, Afghan and Central Asian cuisines. There are a couple of less familiar ingredients here too, such as cockscomb flower extract and ver masala (a spice blend stored in the form of a tablet or cake).

In the book’s Introduction, Gill shares her personal story. As a child she learned about Kashmiri food and culture from several Kashmiri families who worked with her father. She also remembers that, just before winter each year, Kashmiri traders would visit Burnpur to trade shawls, carpets, apples and dried fruits, for which her mother would barter.

Visiting Kashmir as a professional chef (in April 2021) captivated Gill as she learned more about the lifestyles, rituals, culture and cuisine. Kashmir and Ladakh, which sit at the northernmost corner of India, can be difficult to visit, largely untouched by tourism because of their volatile political situation as a contested territory between India and Pakistan.

After her personal introduction, Gill provides a basic summary of Kashmiri food and the thali, one of Kashmiri cuisine’s “crowning glories“. These thalis form the basis of traditional Kashmiri wazwans (banquets), cooked by wazis (specially trained master chefs who pass their skills down through generations). There follows a useful guide to basic spices and preparations with a short set of recipes covering homemade chawan (paneer), homemade yoghurt, praan (shallot paste), and ver masala (spice cakes), and an essay on the history and future of Kashmiri saffron – integral to the cuisine and a key produce of the region.

Recipes are split into chapters for Nashta (Snacks & Starters), Seyun (Vegetarian), Maaz (Meat), Gaad (Fish), Meetha (Desserts), Baith, Chautt & Chetin (Breads, Rice & Chutneys), and a separate chapter on Ladakh. The recipes are interspersed with essays detailing Gill’s experiences as she travelled, the people she met, the food she ate, and the traditions and processes she learned.

I bookmarked so many recipes to try, choosing some that are familiar and others that I’d never come across. Even those that sound like recipes I know well have significant variations in the way they are cooked and eaten in Kashmir and Ladakh. 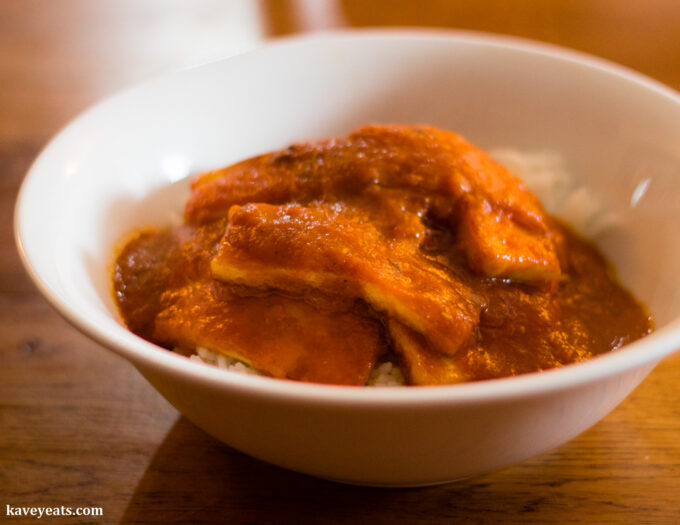 The first recipe we make from the book is a triumph – one of those recipes that seems greater than the sum of its parts! Ruangan Chaman (paneer in tomato curry) combines thinly cut and fried slices of paneer with a tomato gravy made from fresh tomatoes pureed in a processor and a selection of spices. We use some good quality passata instead of pureeing tomatoes, and skip the optional cockscomb flower extract. This is a quick, simple vegetarian dish that’s perfect for a midweek dinner. 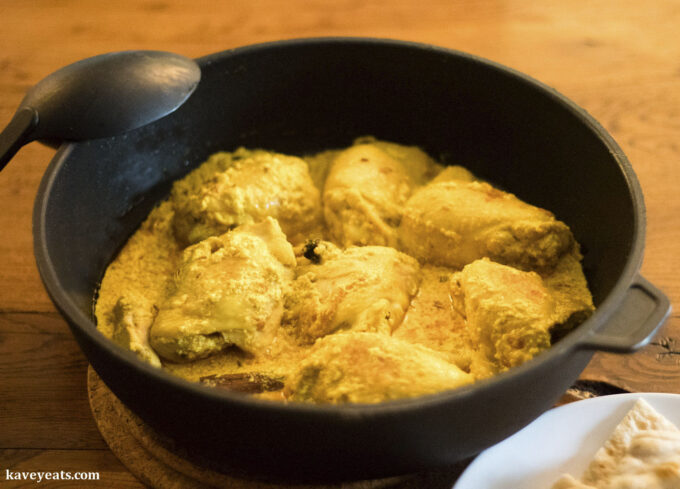 We adjust the recipe for Kokur Yakhni (chicken cooked in a yoghurt and saffron gravy) by switching fresh, puréed tomatoes for a good quality passata, and using bone-in chicken thighs instead of buying and jointing a whole chicken, and this works very well. The flavours are really lovely, and we love the thick sauce created by the yoghurt. It curdles a little, as is often the case when yoghurt is simmered (even full fat) but personally I love the texture that creates in the sauce. We might remove the skins next time, or pop the dish under a grill briefly before serving, to crisp up the chicken skin a little. 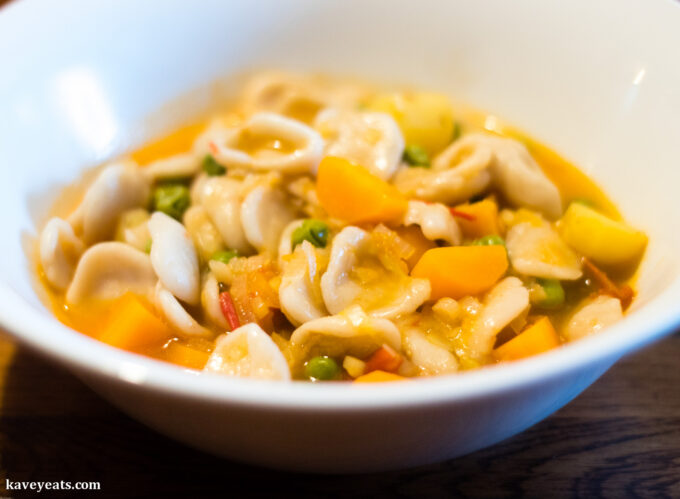 Skyu (pasta with broth) is a wonderfully dish that wrings lots of flavour from a handful of basic ingredients. We don’t have any fresh chillies on the day we make this, so Pete adds a little Kashmiri chilli powder instead, which tastes fantastic and gives the broth a beautiful orange hue.

The method for making the handmade pasta shapes seems unnecessarily convoluted – it calls for the dough to be rolled flat to a depth of 2 mm, then cut into long strips, which are then cut into small squares, before finally each little square is rolled into a ball, and flattened and shaped using one’s fingers. Far, far easier we think to divide the dough into small pieces of a defined size, and then ball, flatten and shape. 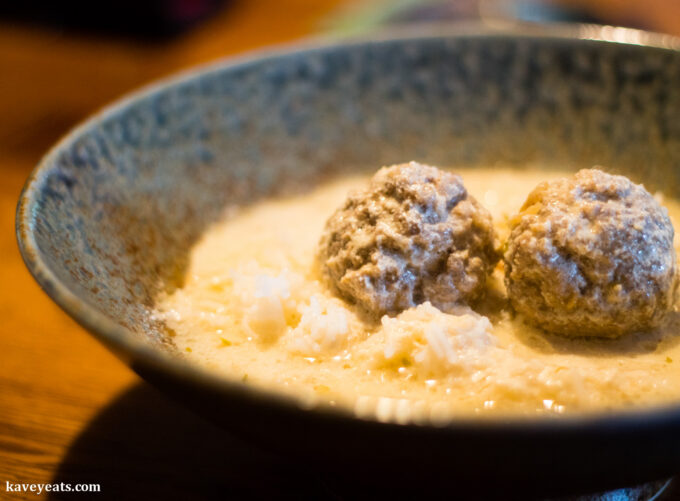 The three recipes above hail from Kashmir, but Ghushtaba (pounded mutton meatballs in a yoghurt gravy) is from the Ladakh chapter. We follow Romy’s suggestion to use a food processor to prepare the meat, rather than working it by hand, which makes the recipe far less consuming of time and effort. This is another satisfyingly simple dish that really lets the flavour of the lamb shine; we use some of the hogget that we buy directly from a nearby farmer and it turns out beautifully. I’d increase the volumes though, as the recipe makes slightly small portions per person unless you add other dishes to the meal alongside.

This book is an absolute pleasure to cook from, and the recipes are not only delicious but easy to adapt slightly (such as our own substitution of passata for freshly pureed tomatoes). There’s a good range of ingredients, a nice balance of omnivore and vegetarian, and recipes to suit different meals from light breakfasts and snacks through quick lunches and onto special occasion meals.

Recipes from On The Himalayan Trail

We have permission from Hardie Grant to share some recipes with you from the book:

Kavey Eats received a review copy of this book from publishers Hardie Grant.