In December I was invited to a seafood cookery class hosted by my friend Signe Johansen (blogger, food writer and food anthropologist) on behalf of the Norwegian Seafood Council, to showcase the quality of Norwegian seafood and share some ideas for how to make the most of it. Having cooked several different dishes with the skrei they sent me last year – miso marinated cod, fish and egg pie, fish and chips and a cod and chive dish, I was keen to try some of the other seafood available. Signe and Hannah (her sous chef for the class)

The recipe I’m sharing below is for the seafood soup, which Sig called a Norwegian chowder, in recognition of the American side of her family background. Unlike the American chowders I’ve had, it’s not thick – the soup is broth-like in consistency – but it does have a great depth of flavour and plenty of richness from the cream. Sig recommends serving with crisp bread but I enjoyed it with regular white bread to soak up the liquid. 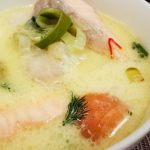 For the chowder base

We didn’t have any prawns on the day, so these were omitted (which meant we didn’t need to strain the stock-flavouring vegetables out). We used a mix of salmon and other fish. We didn’t garnish with crème fraiche or salmon roe. Kavey Eats attended this cookery class as a guest of the Norwegian Seafood Council.

Please leave a comment - I love hearing from you!2 Comments to "Norwegian Fish Soup Recipe"