For Christmas, I bought Pete a cast iron mincer. It was an inexpensive (and rather heavy and large) stocking filler which I bought in a charity sale, boxed and brand new. But I had no idea if would even work let alone work well.

So I was happy to find a recipe that allowed us to test the mincer as well as Michel Roux’s Eggs cookery book, recently received for review from Quadrille. Having successfully tried a few recipes from his Sauces book recently, I was really keen to get cooking with eggs.

The first recipe I chose? Scotch Eggs! One of my favourite things and certainly enjoying a renaissance these last few years.

Before we could start on the recipe itself we needed to convert our pork shoulder steaks to mince. Enter mincer! Unfortunately, our work surface proved to be deeper than the mincer’s clamp could straddle so instead we clamped the mincer to a chopping board and used a clamp from Pete’s toolbox to secure the chopping board to the work surface. Phew! Time to start cranking the handle! The mincer worked like a charm. Quite a faff feeding the meat through, and it took quite a while (not to mention repetitive graft, on Pete’s part) but the end result was excellent. Job done!

That completed, we had all our ingredients assembled. 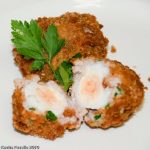 They were delicious! I particularly liked the fresh parsley in the meat layer and the golden crunch of the breadcrumbs. In retrospect, mincing the meat by hand before hand meant it took us two hours to make these. Next time I’d buy meat in bulk, mince the same way and freeze for later use.

I’d like the recipe to give more guidance on how much seasoning to use as, although we added what we thought was a generous amount of salt and pepper, the end result was significantly underseasoned (and the large pinch of paprika we used was completely lost). I realise that seasoning is to taste, but really had no clue where to start on this one.

What I did like was how straightforward the recipe was to follow. Roux has a simple, unpretentious writing style. The recipe worked and it gave us the confidence to make something we’ve never made before!

I’ll be trying (and sharing) some more recipes from this book in coming blog posts!

Please leave a comment - I love hearing from you!23 Comments to "Michel Roux’s Mini Scotch Eggs"