Just in case you’d forgotten (as though I’d let you!), back in March I was the proud (and extremely surprised) winner of the first Food Debate, shouting out for cheese. Although there was no prize proffered beforehand, when I stepped down from the stage, organiser James came over to tell me that there was a prize, if I wanted it, of two places at his newly launched supper club, The Secret Larder.

If I wanted it? IF I WANTED IT? I was absolutely thrilled to be awarded such a generous gift. Not only had I been able to participate in a worthwhile fundraiser, not only had I experienced the adrenalin rush (and fear) of debate, not only had I won but now I had a great evening to look forward to! Result!

The first few dates of the supper club were already fully booked so I put my name down for mid-May and waited, (impatiently) for the date to roll around. My friend Jen of Chocolate Ecstasy Tours joined me for the evening and we made our way to a top floor flat in a converted old school building somewhere in North London.

James shares the flat with his very lovely sister Mary and they run the supper club together, along with service and washing up help from friends. 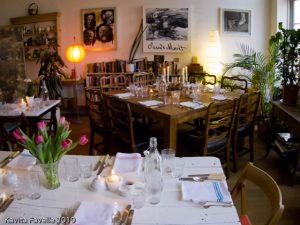 It’s a gorgeous flat. A huge open-plan living area with high ceilings, vast windows, a modern kitchen along one wall and plenty of space and light. A stunning room and one that’s giving me house envy, big time. I love the warm and quirky decorating style too with an eclectic mix of furniture, paintings, pot plants and fairy lights. 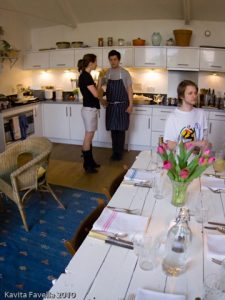 Jen and her moscow mule chatting to James

The Secret Larder has a BYOB policy (no corkage but a glass for the hosts wouldn’t go amiss) so first things first, various bottles were squeezed into the fridge or popped onto a side table. Warm welcomes out of the way, we were surprised with a tall glass of vodka, ginger beer and fresh lime. This divine concoction is apparently known as a moscow mule. Why have I never come across this before? With my sweet tooth and dislike for beer and wine, this is right up my street! 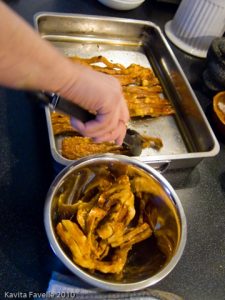 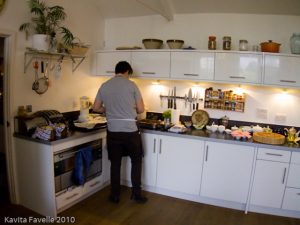 James working on the crackling

As the rest of the guests arrived, we mingled in the seating area (popping over to peer at James toiling away in the kitchen now and then). One of the joys of attending supper clubs is the opportunity to meet fellow guests and there were some fascinating people including a professional photographer who I wished I’d had more time to chat to.

To my delight, another blogger friend, Louis was also attending and better still, James had seated him with Jen and I for the evening. The only downside was that the three of us were at a tiny table of our own. Whilst I had a blast chatting to Jen and Louis I would really have liked us to be on one of the two large tables, to enjoy the full social side of the supper club scene. 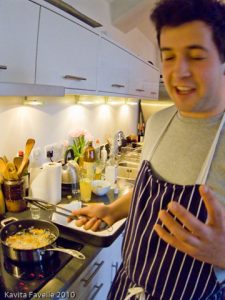 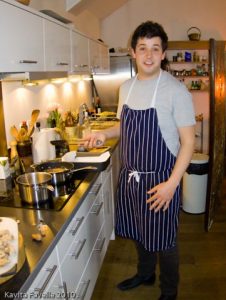 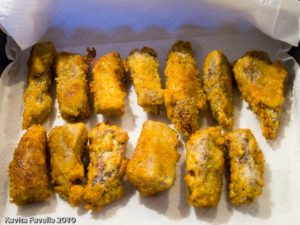 Once most of the guests had arrived (minus the two no-shows, James’ first such cads) we were shown to our seats where pre-starters of ox tongue fritters with horseradish were served. Also on the table were radishes and some fresh butter to go with the home-made soda bread served shortly afterwards. 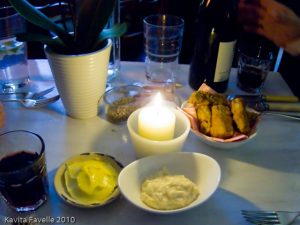 The ox-tongue fritters were decent, though much better when sprinkled generously with the sea salt provided on each table. Some guests seemed more willing to eat them before being told what they were, but overall, they went down well.

With the soda bead came the first great entertainment of the evening. Beautifully presented in pretty serving dishes lined with thick napkins, James held the bread dish over the table for us to help ourselves. As we were chatting about the ox tongue fritters (as you do) we suddenly noticed the napkin had caught fire from the candle below. The wide-eyed, panicked wail for big sister, Mary, who subsequently averted disaster, transformed our unflappable and usually debonair host into helpless little brother. I was laughing far too hard to capture any of this on camera! 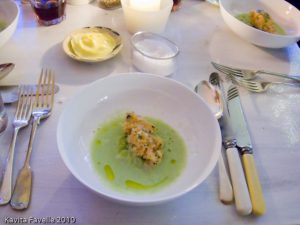 The starter was my favourite course of the night – the chilled cucumber soup with salmon tartare and cucumber pickle was stunningly well balanced – refreshing cold soup, fresh, oily, delicate salmon and wonderfully sweet, light cucumber pickle. It took will power not to race around the room stealing everyone else’s portions of this lovely dish. 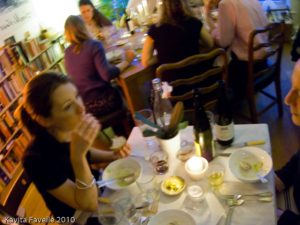 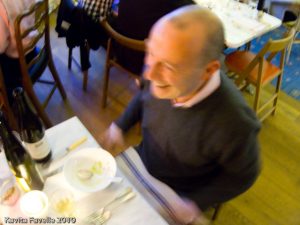 By this time, the room was buzzing, everyone’s bottles were flowing, faces were smiling… James, Mary and Hero (tonight’s helper) brought out generously piled plates of roast pork belly with Jersey royals, savoy cabbage and cider vinegar. With crackling, I cannot forget that crackling! My pork was actually dry and a little tough, but I could see that I happened to receive an edge bit – the meat on my companions’ plates was perfectly moist and fall-apart tender. The vibe was relaxed enough that I knew I could have asked for a swap but I was already so full (and aware that dessert was still to come) that I was happy enough with the very lovely potatoes and cabbage, a couple of mouthfuls of the pork and that delicious crackling (extras of which were brought around shortly after the mains were served). For me, a fair rather than amazing course. 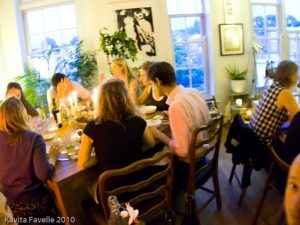 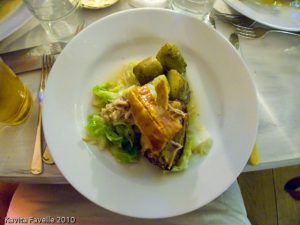 During the breaks between courses, it was nice to look around at the lovely arty knick-knacks including a sweet little display of random keep-sakes on a shelf in the bathroom. The little typed message is by Mary, but never made it to the intended recipient, though I forgot to ask whether the teacup did! 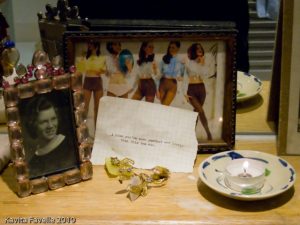 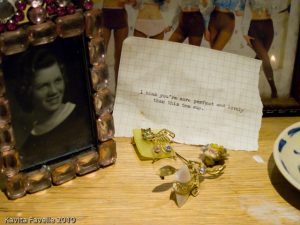 The team were still hard at work in the kitchen and James put the finishing touches to his lemon polenta cake. It was every bit as delicious as it looked, the polenta (and the talents of the cook) locked in lots of moisture and the citrus kick was delightful. 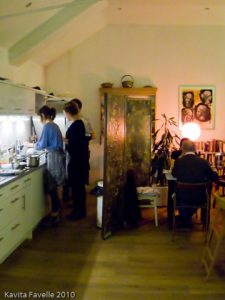 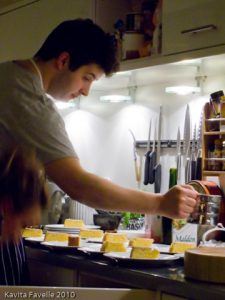 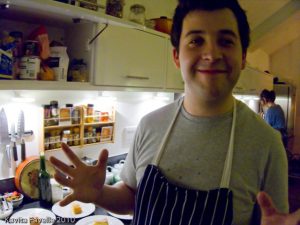 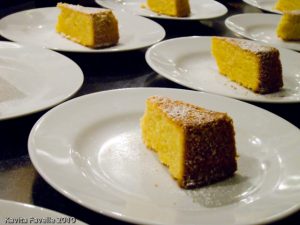 Already full to what I thought was capacity before the lemon cake, I somehow managed to squeeze it in. At which point James mentioned petits fours. My reply that I was so full I’d really like to lie myself flat on the floor groaning resulted in a comment from James that I was welcome to lie down on his bed instead. The millisecond of silence followed by hysterical (and somewhat drunken) guffaws from all three at our table resulted in James’ second (and much more extreme) panic-stricken look of the evening as the poor young lad realised it might sound rather too much like a proposition. Many flustered protestations followed, which only made the giggling worse. Don’t worry James, I’m happy to remain firmly in cyber aunt territory and have no designs on your boudoir! 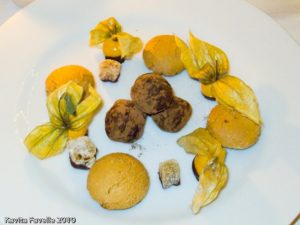 To round the evening off we were offered tea or coffee (served to the table in cafetières) and the beautiful petits fours. The amaretti biscuits dipped in chocolate were my favourite, though the crystallised ginger cubes and physallis fruits similarly treated were also lovely. And wow, those home-made truffles definitely stole Jen’s chocolate-loving heart. 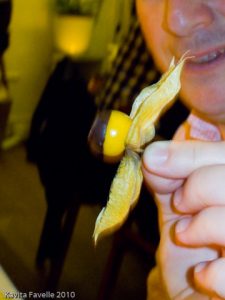 James showing off his chocolate-dipping talents

The meal over, some of us moved back across to the seating area to chat amongst ourselves, and with our lovely hosts. Sadly, it was a school night, so it wasn’t long before the majority made moves homewards, though James and Mary were in no rush to chivvy anyone out.

All in all, a lovely evening and even more so being an unexpected and wonderful prize. More than worth the £25 donation James and Mary suggest – I can readily understand why some guests leave more. New dates book up very quickly once announced, so if you want to visit, keep an eye on the website or ask James to add you to the supper club’s mailing list.

Please leave a comment - I love hearing from you!10 Comments to "A Mighty Fine Prize: An Evening With James & Mary"