I mean the real deal, with beautifully spiced meat between layers of fragrant basmati rice…

NOT stir-fried rice with a few bits of meat thrown in, served with a side of sloppy vegetable curry, that is sold as biryani by so many curry houses across the UK. *rolls eyes* 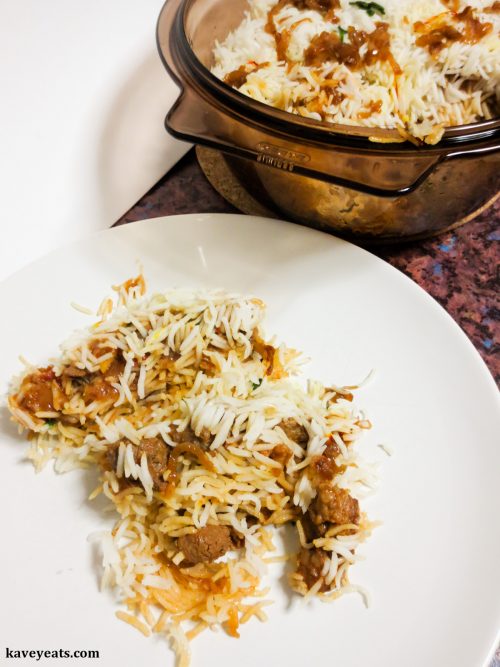 Incidentally, if you’re wondering about the difference between pulao (pilaf) and biryani it is in the cooking method rather than the ingredients: rice is the core ingredient in a pulao, often supplemented by meat or vegetables, just like a biryani, however all the ingredients of a pulao are cooked together. In a biryani, the meat or vegetables are prepared separately, then assembled into a cooking pot with the rice, before the biryani is baked to finish. In some variations, the meat and rice are par-cooked before assembly, in others they are added raw.

“Biryani” comes from the Persian birian / beryan, which is a reference to frying or roasting an ingredient before cooking it. The actual dish was likely spread across the wider region by merchants and other travellers many centuries ago.

Biryani was very popular in the kitchens of the Mughal Emperors who ruled between the early 16th century to the early 18th century and it remains a much-loved dish in India today.

The Mughals were a Central Asian Turko-Mongolic people who settled in the region in the Middle Ages; their influence on architecture, art and culture, government and cuisine was significant. Mughlai cuisine is today best represented by the cooking of North India (particularly Utter Pradesh and Delhi, where my mother and father are from, respectively), Pakistan, Bangladesh and the Hyderabadi area of Andhra Pradesh in South East India. It retains many influences from Persian and Afghani cuisine.

There are many versions of biryani but two of the best known in India are Lucknowi (Awadhi) biryani and Hyderabadi biryani. For a Lucknowi biryani, the meat is seared and cooked in water with spices, then drained. The resulting broth is used to cook the rice. Both the pukki (cooked) elements are then layered together in a deep pot, sealed and baked. Hyderabadi biryani uses the kutchi (raw) method whereby the meat is marinated and the rice is mixed with spiced yoghurt (but neither are cooked) before being assembled in a deep pot and baked. The flavours of the meat and rice components in a Hyderabadi biryani are quite distinct, as compared to the Lucknowi biryani where they are more homogenous.

Also popular is Calcutta biryani, which evolved from Lucknowi style when the last nawab of Awadh was exiled to Kolkata in 1856; in response to a recession which resulted in a scarcity of meat and expensive spices, his personal chef developed the habit of adding potatoes and wielding a lighter hand with the spicing.

What is common to most variations is the dum pukht method – once the food has been arranged in the cooking vessel, the lid is tightly sealed (traditionally using dough but foil or rubber-sealed lids are a modern-day substitute) and the pot is baked in an oven or fire; the steam keeps the ingredients moist and the aromas and juices are locked in. 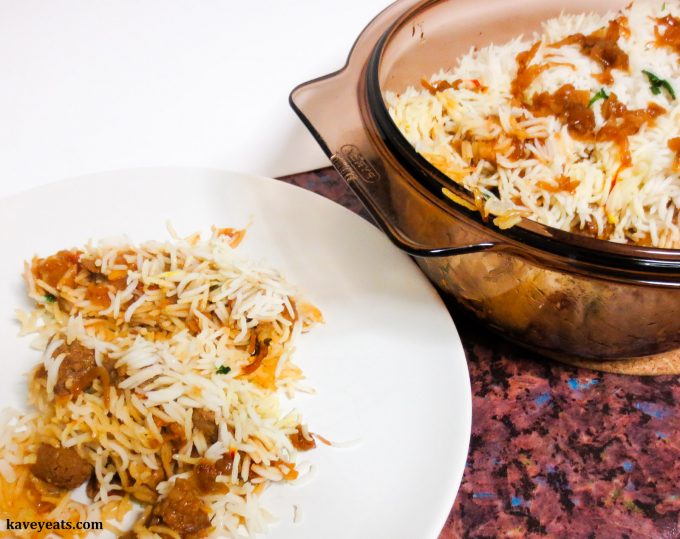 Biryani is often served for celebratory feasts such as weddings, though most don’t take it quite as seriously as the two families involved in a cautionary tale that my friend alerted me to – a wedding was called off after an argument between the two families about whether chicken or mutton biryani should be served at the reception!

My mum, who grew up in Utter Pradesh, makes a delicious pukki method biryani, in the Lucknowi style. However, rather than using the liquid from the meat to cook the rice, she makes a fragrant lamb curry (with just a small volume of thick, clinging sauce rather than the usual generous gravy) and she flavours the rice with fresh coriander and mint and rose or kewra (screw pine flower) essence. Her recipe involves slowly caramelising onions, half of which go into the lamb curry and the rest of which are layered with the meat and rice when the biryani is assembled. The pot is sealed tightly and baked until the rice is cooked through.

You’ll notice that I specify basmati rice for this recipe – and that’s because it’s the most traditional rice used for Indian biryani. Of course there is the taste – basmati is a wonderfully fragrant rice – but it is also important that the grains remain separate after cooking; some rice varieties are much stickier or break down more on cooking. Longer grained basmati is prized over shorter grain, perhaps because rice must be carefully harvested and handled in order not to break the grains or just because it looks so elegant? Tilda, the best known brand of Basmati rice in the UK, recently launched a new product into their range. They describe Tilda Grand as a longer grained basmati rice, particularly well suited to making biryani and other Indian and Persian rice dishes.

Mum comes from a Basmati growing region of India and has seen Basmati planted, growing and harvested many times. Her family in India buy large sacks of rice when it is newly harvested and store it to mature because the flavour gets better with age; indeed I remember mum telling me how her parents saved their oldest basmati rice to serve to guests and on special occasions. Since I was a child, mum has always bought Tilda Basmati rice, so I asked her to try the new Tilda Grand and give me her feedback.

She didn’t find it as fragrant as usual but confirmed that it cooked much the same as the rice she regularly uses and commented that the grains remained separate and were longer than standard. That said, the grains weren’t as long as she was expecting; she has come across significantly longer grained rice in India in recent years.

This biryani, made to my mum’s recipe, is the first I’ve ever made and it was utterly delicious! 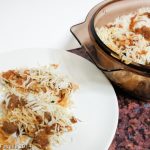 The quality of the meat is important, so do buy good quality lamb or mutton. I used lamb steaks for my biryani.

Kavey Eats received samples of Tilda Grand rice from Tilda; as usual, there was no obligation on my part to write about it or to review favourably.

Please leave a comment - I love hearing from you!47 Comments to "How to Make Mamta’s Delicious Lucknowi-Style Lamb Biryani"