Surely it’s impossible not to love soda bread! Not only is it soft and delicious, it’s ridiculously quick and easy to make. When I talk about soda bread, I am using the term to cover any bread where bicarbonate of soda is the rising agent, rather than yeast.

This type of bread making is thought to have originated in the Americas, where European settlers and indigenous peoples used potash to leaven quick breads. Recipes began to appear in American cookbooks from the last few years of the 18th century onwards. The technique didn’t really appear in Europe until the middle of the 19th century, when bicarbonate of soda (also known as baking soda) first became available here.

Regardless of the origins, for me Ireland is the spiritual home of soda bread where it’s widely enjoyed, much loved and considered a classic, perhaps even a staple.

Soda bread can be made with wholemeal or white flour, or a combination of both. In Ireland, only versions made from white flour are commonly called soda bread. In Northern Ireland, wholemeal varieties are known as wheaten bread (and are often a little sweetened); in Éire, wholemeal versions are simply called brown bread.

With the exception of buttermilk, the ingredients are all long-life store cupboard essentials, so you can knock up a loaf at short notice. Even if you don’t have buttermilk, which is used in most traditional recipes, natural yoghurt or acidulated milk can be substituted in its place (see recipe). The key is to include an acidic element to activate the bicarbonate of soda.

Indeed, this recipe came about when Pete and I fancied some warm, freshly-baked home bread for lunch but weren’t prepared to wait the several hours a yeasted loaf would have taken.

I have a trusted recipe for soda bread but this time we decided to replace the whole meal flour with spelt – spelt flour is better suited to soda bread than yeasted recipes, as its gluten doesn’t readily form the elasticity required to stretch and trap the air bubbles created by yeast.

We also added malt extract, to give a little more flavour.

Some recipes use a higher proportion of oats to flour than ours, but we find this can make the texture a little too dense and heavy for our liking. Here, we used Mornflake medium oatmeal. Mornflake has been milling oats in South Chesire since 1675 and is still family-owned and managed by the descendants of the original miller, William Lea. The company contracts farms throughout the UK to supply it with grain and now sells both milled oats and a range of breakfast cereals.

We used Sharpham Park white spelt flour, grown on an organic farm in Somerset. We are also huge fans of their pearled spelt, which we use regularly in recipes like this chicken and pea farotto, a risotto-like dish in which spelt takes the place of rice. 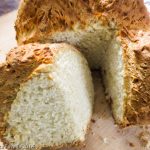 The spelt flour in this recipe can be replaced with regular wholemeal flour.
If you don’t have any buttermilk, you can use plain (natural) yoghurt thinned down with a little milk or sour 250 ml of milk with a tablespoon of lemon juice or vinegar.
This recipe can be doubled up to make a larger loaf, but you’ll need to increase baking time accordingly. Please leave a comment - I love hearing from you!One Comment to "Malted Spelt Soda Bread Recipe | Tasty Bread in Half an Hour"