Whether you ordered Flake 99 in a cone or a bubble-gum toting Screwball in moulded plastic, at the heart of both was pale-as-snow, smooth-flowing, soft-serve Mr Whippy vanilla-flavoured ice cream.

There were actually two variations of Screwball that Pete and I remember – the ready-filled ones with raspberry ripple ice cream under a cardboard lid and the Mr Whippy one, but when I decided to recreate a Screwball, it had to be Mr Whippy. I quickly realised that making ice-cream-van dispenser-style soft-serve ice cream at home is not as straightforward as it might seem. But I found an online recipe that seemed doable and, with Pete’s help, had a go.

To our surprise, the strange recipe worked!

In the absence of suitable plastic moulds (I considered finding and cannibalising a model dalek but decided that might be a bit expensive), I served my upside-down Screwball in a pretty glass instead. 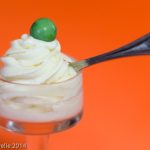 Please leave a comment - I love hearing from you!22 Comments to "Making Mr Whippy | My Homemade Screwball Ice Cream"