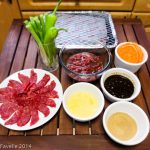 As we were using this as a marinade, the slightly runny texture suited us well. However, if you’d like a thicker yakiniku sauce, continue to heat gently to reduce and thicken.