London isn’t traditionally known as a place where cheese is made but in fact there are London based producers, one of whom is the fantastic Wildes Cheese. Launched in 2012 after cheese maker Philip Wilton was made redundant from a management consultant job, the business is run by Phil and partner Keith Sides out of an industrial unit in Tottenham, North London. Before then, Philip had been making cheese at home as a hobby.

I assume that the name comes from a merging of their surnames, which I love – I did mean to ask but the day was so full and it plain fell out of my head to check! Makes me glad Pete and I never sought to name a business in the same way – neither Fapta nor Gupelle sound very appealing!

Phil is often asked why he started making cheese. He explains it’s “because it’s pure magic, a form of alchemy; you take a ubiquitous product like milk and then with a little sprinkling of magic and months later you have cheese; mild cheese, strong cheese, blue cheese, hard cheese or soft – it’s a wow!”

As I’ve said many times, cheese is my single favourite foodstuff in the world, so this sense of genuine delight and excitement – in both the process and the product – really strikes a chord with me. 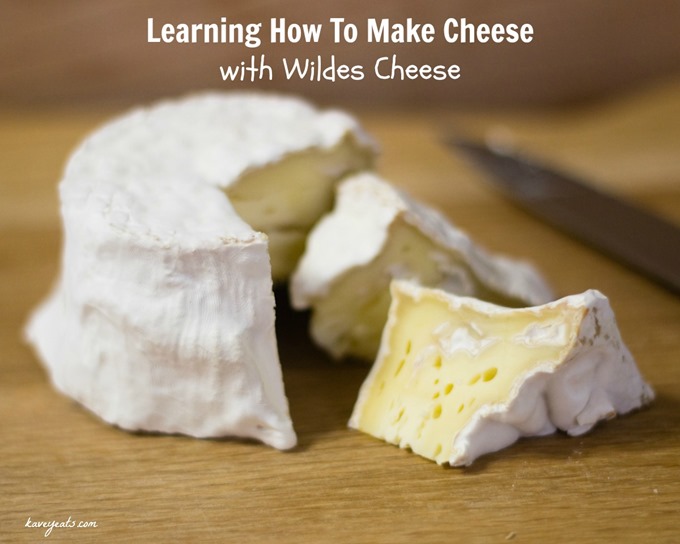 Wildes make cheeses in a range of styles including soft cheeses with their typical white bloom rinds, semi-softs (what I think of as bouncy cheeses), semi-hard and hard varieties and a wonderful soft and pungent blue. The cheeses themselves are the result of experimentation and innovation – instead of making the same old recipes as everyone else, Phil likes to play with different combinations of processes, cheese cultures, and ageing to create something new and tasty. He names his cheeses just as idiosyncratically; usually after local places or people – Alexandra for the nearby palace, for example and St Bruce aka The Drunk (doused as it is in local brewery Redemption’s Hopspur beer) and then there’s Londonshire – a cheese named for the capital city, just as Chesire, Lancashire, Leicestershire and cheeses are named for their homes.

The cheeses are sold directly via London food market stalls and an online shop, as well as to restaurants and retailers, with a focus on selling locally rather than nationally.

When Wildes develop a new cheese that they like, they get feedback on whether it’ll be popular with customers by selling it on the market stall under the name Brian – there’s usually a new Brian every month. The most delicious and popular Brians are given a permanent name and may well feature in Wildes’ semi-permanent range – several at any one time. 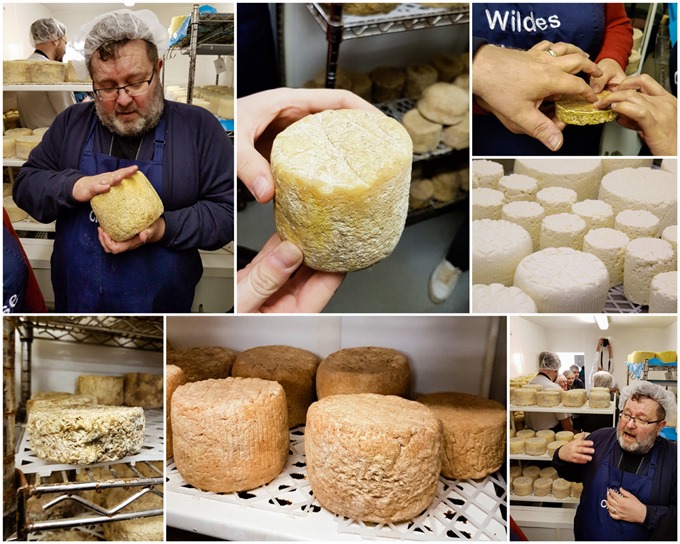 A tour of the cheese caves, where the magic of ageing transforms fresh curds into beautiful cheese

Pete has been interested in making cheese at home for a long time – indeed we tried using a cheese making kit a few years ago, but the accompanying instruction book was awful and successive failures put us off for ages.

When we were invited to attend a cheese making class at Wildes Cheese, we jumped at the opportunity and had an absolutely fantastic day.

There are three different courses available. The shortest is a new morning class which focuses on showing you around the dairy, explaining how cheese is made and a practical demonstration of the cheese making process. In the evening class students are also introduced to cheese making and shown around the dairy, and are also invited to taste different milks and cheeses. This class includes a practical session where all the attendees get the chance to stretch and shape mozzarella.

We attended the full day class. Between 9.30 and 4 pm we learned all about making cheese (using equipment readily available to home cooks), and made four different types of cheeses from scratch – for our group those were a fresh curd cheese, a soft blooming rind cheese (in the style of camembert or brie), a hard yellow cheese and a blue. 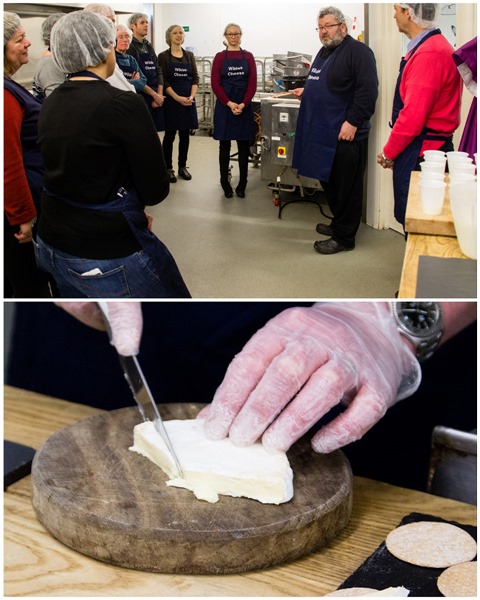 Before the practical session starts, a tasting of different milks and, of course, some cheese

Not only was the class hugely informative with a million handy tips, and educational tales of caution and success, it was so much fun! Phil is one of those larger than life characters that infects everyone around him with joy and enthusiasm, not hard to do when you’re as excited as we were to begin with! 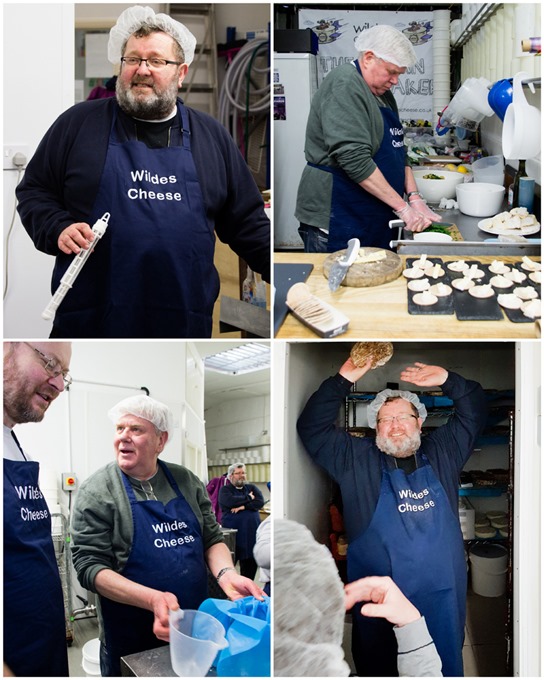 The Wildes boys, and Pete at the bottom left

Keith took on the practical chores – or so it seemed during our day – making sure our buckets of warmed milk were delivered to each pair of students, preparing milk and cheese samples for us to taste and most importantly, pulling together a pretty fantastic lunch spread. 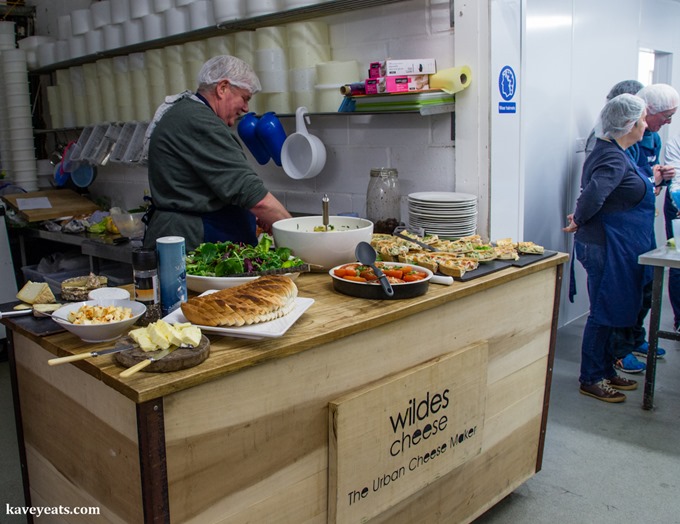 Lunch, a fabulous spread of quiches, salads, bread and of course, cheese

The fresh curd cheese we made reminded me how delicious this simple cheese can be – I’d been turned off it by those horribly tasteless, low-fat cottage cheeses so beloved by dieters. 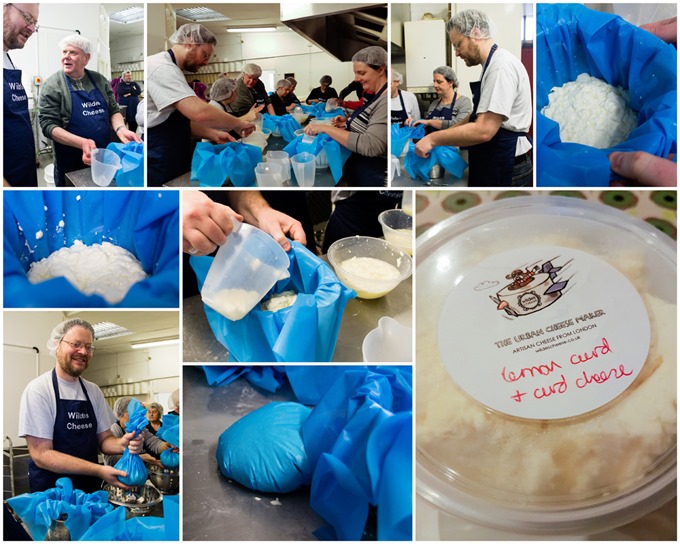 I loved Wildes’ practical way of giving us inspiration in how to use this kind of cheese – a huge array of mix-ins were laid out on big benches, everyone was encouraged to divide their bowl of fresh cheese into portions and then mix in different ingredients to create delicious spreads. Lemon curd and fresh curd cheese was my favourite, an absolute winner served on plain digestive biscuits, like a light and fresh lemon cheesecake. Also fabulous were versions with ras al hanout and fresh green herbs, as well as a simple one with nothing more than a generous pinch of smoky paprika. 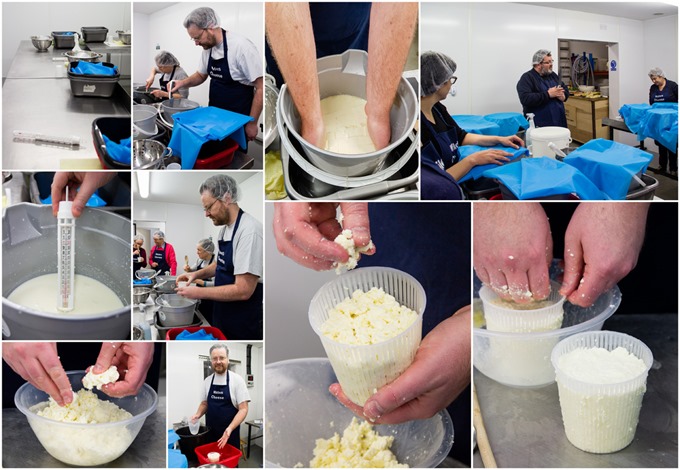 Making the other three cheeses, similar processes but adding different cultures to control how the cheeses mature

The process for making the other three cheeses was somewhat similar – heating the milk, adding the rennet and culture, cutting and straining the curds, and pressing the curds into moulds, to form their shape. 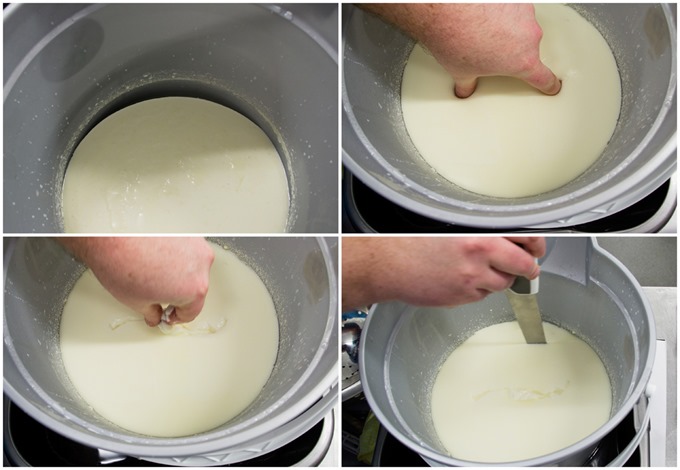 Of course, the soft bloomed cheese, hard cheese and blue all need maturing before they are ready, between 2-3 weeks for the soft one and 6+ weeks for the other two.

Armed with detailed recipe and maturing instruction booklets, we carefully bought Pete’s cheeses home, allowed them to drain on the sideboard for a couple of days and then gently placed them the fridge to wait for time do its thing. A domestic fridge is fine for this; we used a little beer fridge with temperature controller to keep our cheeses at the recommended temperature. 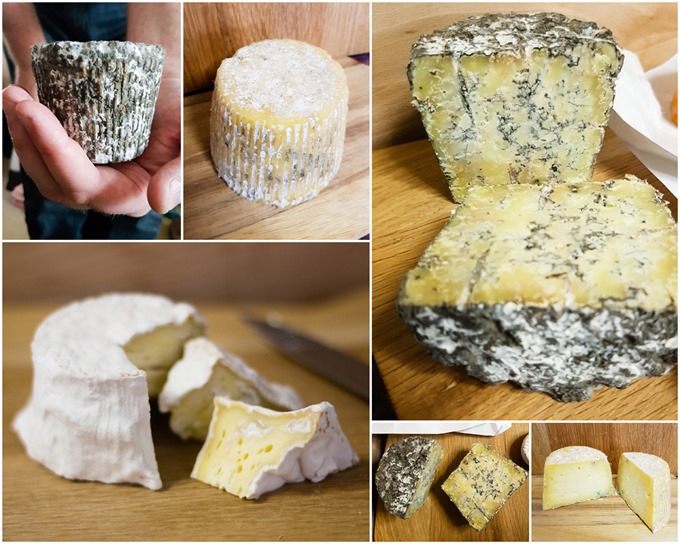 Our cheeses after maturation at home

Our cheeses after maturation at home turned into a soft white rind cheese, a blue and a hard cheese. Our Brie-a-like was a little dryer than it should have been – we drained it a touch too long before transferring it to the fridge and the humidity level may not have been high enough in our little beer fridge – but it was fabulous, just like a Camembert or Brie.

The blue was glorious, poking holes into it with a skewer had allowed the blue veins to develop freely and it was a beautiful firm blue cheese.

The hard cheese had a touch of blue mould on the surface and in one corner, as we’d not been able to separate it adequately from the blue, whilst in the fridge, but was another success – beautiful melted onto cheese toasts too. 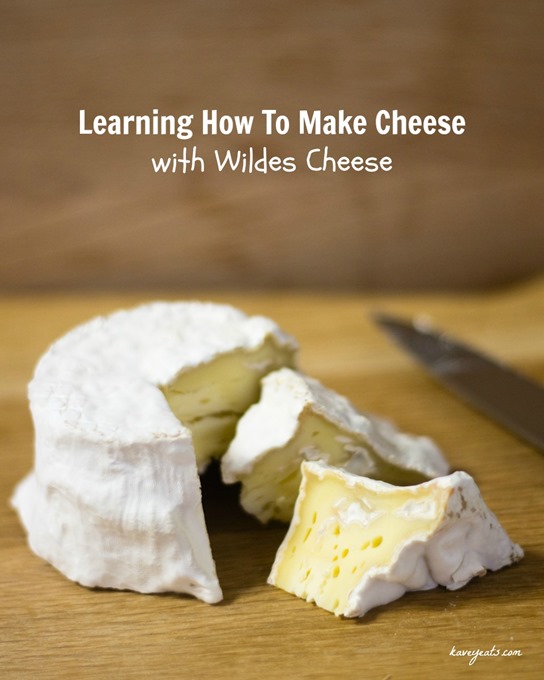 A practical class like this is the best way to learn all you need to be able to make a wide range of cheeses at home. Seeing and feeling what things should (and shouldn’t!) look like all the way through the cheese making process is the best way to gain confidence and I can’t wait for Pete to put his new skills into practice.

Book for yourself, or buy a place as a gift for a cheese-addicted keen cook in your life.

Please leave a comment - I love hearing from you!26 Comments to "Learning How To Make Cheese With The Wildes Cheese Boys"