Today is World Sake Day. Kanpai! Sake is a drink I’ve been learning more about over recent years and I’ve come to really appreciate it. I seek out new sakes whenever I can.

Here’s my beginner’s guide to sake. 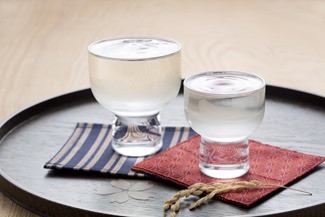 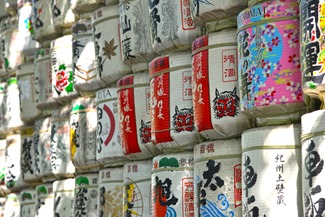 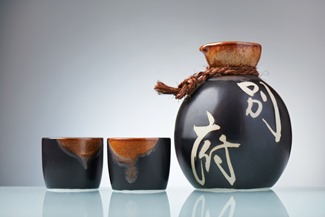 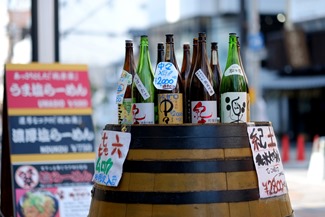 Sake is a Japanese alcohol made from rice.

Although it is referred to in English as rice wine, the process is more akin to brewing beer, where you convert starch to sugar and then convert the resulting sugar to alcohol. In wine making, it is a simpler process of converting sugars that are already present in the fruit. Of course, brewing sake is not entirely like beer making either as the sake production process is quite distinct.

Wine is typically around 10-15% ABV. Beer is usually lower, with most beers coming in between 3-8%, though there’s been a trend towards ever stronger beers lately. Sake is brewed to around 18-20%, but often diluted to around 15% for bottling.

Until a few years ago I’d only ever encountered cheap sake served warm and was not a huge fan. However, since trying higher quality sakes served chilled, I’m an absolute convert.

In terms of typical flavours, my vocabulary is woefully lacking, but for me the core flavour is a subtly floral one – perhaps this flavour is intrinsic to rice and rice mould? The balance of sweetness and acidity varies though classic sake is not super sweet. Sometimes it is fruity and sometimes it has a more umami (savoury) taste. I am often able to detect clear differences on the palate but unable to define them in words – clearly I need to drink more sake!

How is Sake made?

Sake is made from rice, but usually from varieties with a larger, stronger grain that has lower levels of protein than the rice varieties that are typically eaten.

The starch sits within the centre of the rice grain, surrounded by a layer of bran, so rice is usually polished to remove the outer layer before being made into sake. The more the rice is polished, the higher the percentage of starchy centre remains, but of course this is more expensive as it needs far more rice to produce the same volume of alcohol.

After polishing and being set aside to rest, the rice is washed, soaked and steamed. kōji rice mould (Aspergillus oryzae) is sprinkled over the rice which is left to ferment for several days. This mould helps to develop the amylase enzyme necessary to convert starch to sugar. Next, water and yeast (Saccharomyces cerevisiae) are added and the mixture is allowed to incubate. Water and yeast are added multiple times during the process. The resulting mash then ferments at 15-20 °C for a few weeks.

After fermentation, the mixture is strained or pressed to extract the liquid, and the solids may be pressed again to extract a fuller range of flavours.

In cheaper sakes, varying amounts of brewer’s alcohol are added to increase the volume.

Sake is usually filtered again and then pasteurised before resting and maturing, then dilution with water before being bottled.

These days you can also find unpasteurised sake and sake in which the finer lees (sediment) are left in. I’ve even had some very thick and cloudy sakes where some of the solids have been pureed and mixed back in to the final drink.

What are the different categories of Sake?

Because the most desirable bit of the rice is the core of the grain, the amount of polishing is highly relevant to the quality and characteristics of sake. For all Tokutei Meisho-shu (specially designated sake), labels must indicate the seimai-buai (remaining percentage) of the original grain.

Daiginjo means that at least 50% of the original rice grain must be polished away (so that 50% or less remains) and also that the ginjo-tsukuri method – fermenting at cooler temperatures – has been used. There are additional regulations on which varieties of rice and types of yeast may be used and other production method restrictions.

Ginjo is pretty much the same but stipulates that at least 40% of the original rice is removed by polishing (so that 60% or less remains).

Pure sake – that is sake made only from rice, koi and water – is labelled as Junmai. If it doesn’t state junmai on the label, this indicates that additional brewers’ alcohol has been added. So a sake labelled Junmai daiginjo is the highest grade in terms of percentage of rice polished away and is a pure sake with no brewer’s alcohol added.

Coming down the scale a little, Tokubetsu means that the sake is still classed as ‘special quality’, with up to 60% of the rice grain being retained, as per Ginjo, but production methods are different, especially when it comes to fermentation temperatures. Tokebetsu junmai means the sake is pure whereas Tokebetsu honjozo means the sake has had alcohol added.

Honjozo on its own means that the sake is still rated above ordinary sake, but the rice is polished to remove at least 30% of the bran, leaving up to 70% of the original rice grain.

Futsu-shu (non-designated sake) is the equivalent of “table wine” in France, and can vary in quality from good to poor.

Note that most sake is diluted to about 15% ABV (alcohol by volume) before bottling.

What are the different types of sake?

Namazake is unpasteurised sake. Most sake is heated to pasteurise before being bottled. In contrast, namazake is considered a fresh product, and needs to be kept chilled.

Muroka has been pressed and separated from the lees as usual but has not been carbon filtered. It is clear rather than cloudy but often has some colour to it.

Nigorizake is cloudy rather than clear – the sake is passed only through a loose mesh or coarse cloth to separate the liquid from the mash. It is not filtered. There is usually a lot of sediment remaining and it is common to shake the bottle to mix it back into the liquid before serving.

Koshu is sake that has been aged for at least two years or more. It develops rich flavours, somewhat like sherry, with a nutty or spicy flavour profile.

Taruzake is aged in wooden barrels or casks made from sugi, sometimes called Japanese cedar. The wood imparts quite a strong flavour and fragrance to the sake.

Kuroshu is made from completely unpolished brown rice grains. I’ve not tried it but apparently it’s more like Chinese rice wine than Japanese sake.

Amazake can be low- or no-alcohol depending on the recipe. One way of making it is to add rice mould to whole cooked rice, allowing the koji to break down the rice starch into sugars, with the result then mixed with water. Another method is to mix sake lees (solids left over from sake production) with water – additional sugar can be added to enhance the sweetness. Amazake is served hot or cold; the hot version usually has a little grated ginger provided to be stirred in to taste. I wrote about Amazake in this post, after we tried it in Kyoto during our first visit to Japan.

Sparkling, Sweet and Flavoured Sakes have become increasingly popular as sake brands look for ways to appeal to new demographics to widen their customer base. In Japan sparkling and sweet sakes are often marketed to women but I would recommend them to all as a light, refreshing and summery alternative to the classic styles. Fruit options, such as peach, plum and yuzu are also popular.

I hope this guide helps you to understand more about this wonderful drink and you are encouraged to seek it out and try for yourself.

If you are interested to read more about Japanese food and drink and travelling in Japan, please check out my other Japan posts.

Please leave a comment - I love hearing from you!42 Comments to "Want to Learn About Sake? My Sake Guide For Beginners"