Cep aka porcini is such a prized mushroom that it is often showcased as the key ingredient in very simple dishes like the tagliatelle ai porcini I enjoyed in Parma a couple of years ago. It’s fêted in porcini festivals; there are recipe books dedicated to it; even children’s stories! But fresh porcini is expensive, and the main season (in Europe) runs only from late August to November. It hasn’t yet been successfully farmed so supply comes from the wild, hence the cost and the lack of availability.

But don’t despair! There are other mushrooms which are less expensive and more readily available and can be just as delicious when used well. The King Oyster (Pleurotus eryngii) – also known as the King Trumpet and the French Horn – is one such mushroom. In the wild, it can be found year round, though the high season is August to February. It’s also a variety that is successfully farmed, and hence it’s available a little more widely in supermarkets and markets, though still not as common as Chestnut, Button and Portobello mushrooms.

(Incidentally, did you realise that Portobello mushrooms are actually just large, mature Button mushrooms? No, me neither until I was looking up aliases for the King Oyster!) As it’s name suggests, the King Oyster is the grandest member of the Pleurotus genus, which also contains the regular oyster mushroom and the bright yellow golden oyster mushroom. Unlike many in the genus, which have minimal stems and wide, frilly caps the King Oyster has a thick white stem and a small pale brown cap. The texture is dense and meaty. Although the King Oyster doesn’t taste of much (or smell, for that matter) when raw, once cooked it’s delicious – it has a deep mushroom earthiness, a slightly sweet nuttiness and a silky firm texture. In fact, although “meaty” is a common description, I’d say its texture is perhaps more reminiscent of shellfish though don’t let that put you off trying it, if you’re not a fan. (Certainly, the shape of the cooked slices reminded Pete and I of little fishes!) We bought these mushrooms from the Turnips mushroom stall at Borough Market one Saturday in January. Four fat specimens cost under £6 and we picked up a tub of Hurdlebrook extra thick, natural and untreated cream to pair with them. (Hurdlebrook are based in Somerset, and produce beautiful dairy from their Guernsey cows).

I’m keeping the recipe very loose, as it’s very simple and the amounts can be adjusted easily to serve more or less people. 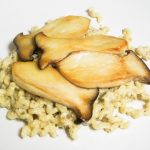 This was a super meal; we both commented repeatedly on just how enjoyable it was and so simple to make too.

Have you tried King Oyster mushrooms? What’s your favourite way to cook them? What mushrooms do you suggest I look out for next?

With thanks to Mark from Galloway Wild Foods for helping me clarify some mushroom facts via twitter. You may also enjoy this great post about mushrooms from my friend Urvashi.

Please leave a comment - I love hearing from you!12 Comments to "King Oyster Mushroom & Cream Pasta"