Olly Smith is well known as a wine writer and presenter, respected for helping the nation to find and appreciate good wine. But he’s also a keen food lover and has written his own cookery book Eat and Drink full of his favourite recipes, with an emphasis on food that’s great to drink with. The collection is wide-ranging and includes recipes handed down in his family as well as his own creations and adaptations. The writing style is very much like his energetic speaking style and very down to earth. 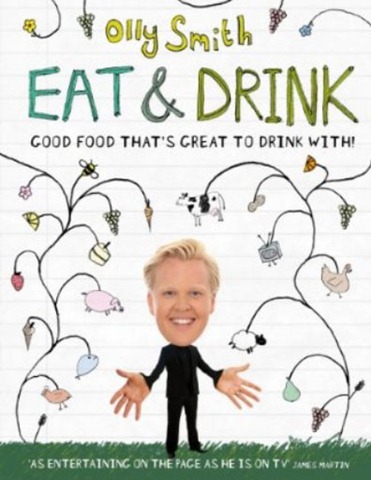 And there’s an endearing ode to Roger Moore than runs throughout the book.

I confess that I really like photographs in cookery books and those are missing here. But it’s an easy read with many appealing recipes including a tangy orange and squidgy almond cake, north sea chicken in a hijack sauce, lavender-studded roasted lamb rump, orange blossom rum babas, great granny Lennard’s crunchie pie and sticky bourbon beef. Don’t those sound wonderful?

What drew me to the recipe below is that it starts a lot like my slow cooker chicken, where I poach a whole bird for several hours in a basic braising liquid. This recipe starts off similarly but then mixes the wine-poached chicken into a sauce made from the reduced cooking liquid and green grapes.

We discovered as we were about to start cooking, that our mushrooms had gone off, so we omitted them from the recipe. I adore mushrooms, so will make sure I include them next time.

I adapted the recipe to use my slow cooker for the first part, so didn’t pre-soften the onions, nor seal the chicken; since one strips away the skin when taking all the meat off the carcass, I couldn’t see the point in sealing and the onions softened completely during the long period in the slow cooker.

I did use stock, as per Olly’s ingredients, but don’t think that was necessary – I didn’t find the cooking liquid any deeper in flavour than what I’ve always achieved using wine and water.

Rather than put the cooked bird aside, make the sauce and put it aside, then strip the bird and add back to the sauce and reheat I re-ordered the steps and set the chicken aside only while I transferred the cooking liquid sauce onto the heat. I stripped the chicken meat while the sauce was reducing and then, once it was reduced, put the meat straight back into it; t`he meat quickly reheated in the hot sauce.

We had it with potatoes, which were put on to boil while the sauce was reducing.

Because I switched to using the slow cooker, we probably had a larger volume of liquid to reduce than had we used Olly’s recipe as it’s written so it took a fair old time! The finished result was delicious!

Olly Smith’s Eat and Drink is published by Headline Home.

Please leave a comment - I love hearing from you!4 Comments to "Jolly Olly’s Chicken Veronique"