Britain isn’t known as a nation of offal lovers, but we certainly eat it.

It’s highly probable you’ve eaten offal before as it features in a several popular national dishes. Haggis is made by stuffing a sheep’s stomach with liver, heart, lungs and oats. Faggots are balls of minced pork and pig offal wrapped in caul fat. Sweetbreads have almost become a staple of the modern gastropub menu while steak and kidney pie is a classic.

Looking to our European neighbours, many of us enjoy Italian calves liver with onions or sage and butter and a beautifully dressed green salad with chicken livers or gizzards is popular on any French menu prix fixe. And who doesn’t love a rich liver paté?

Although offal such as brawn, chitterlings, tongue, tripe and trotters have fallen from favour in recent decades, take heart – the offal I’m encouraging you to try is not so challenging! There’s a belief that all offal has a strange texture (like tripe and liver) and a strong flavour (like kidneys) but this isn’t true. Fresh chicken hearts don’t have a strong or distinct taste and they aren’t gritty, gelatinous or crunchy. When grilled quickly on a high heat, they’re tender morsels with a surprisingly subtle red meat taste. In texture, they’re softer than you might expect, with a hint of bounciness like flash-fried fresh squid.

Chicken hearts, although slightly high in cholesterol, are rich in essential B vitamins (including B12, riboflavin and folic acid) and minerals (including zinc, selenium, iron and potassium).

Around the world, they’re extremely popular.

Across South America, the asado (barbecue) is king and an array of steaks is accompanied by sausages and offal. In Brazil, chicken hearts roasted on skewers are an integral part of a churrascaria (grill house) menu.

Although it’s easy to think of the Indian subcontinent as a region of vegetarians, this dismisses the diversity of meat eaten across India, Pakistan, Bangladesh and Nepal. All have traditional recipes prizing offal, such as the Punjabi Katakat in which a mix of offal is fried in butter and spices.

Offal is most prominent in the cuisines of East Asia. The expression “nothing goes to waste” is put to practice nowhere as well as China, where the popularity of offal is not only due to a desire not to waste any part of the animal but also a belief that many types of offal confer health benefits. As such, offal is considered a delicacy and chicken hearts are enjoyed stir-fried, braised and grilled in many different recipes. In Korea, grilled chicken hearts in a barbeque marinade are commonly sold in street bars, perhaps with a pot of fiery gochujang (a fermented condiment of chilli, rice, soybeans and salt) on the side. In Indonesia and Malaysia, they are one of many types of offal used to make gulai, a type of curry with a rich, spicy, turmeric-heavy sauce.

But my favourite way of enjoying chicken hearts is Japanese yakitori, where different cuts of chicken are threaded onto skewers and grilled over charcoal. Tare, a sweet and salty dipping sauce is sometimes also brushed onto the meat before grilling. Yakitori is popular in izakaya (Japanese pubs) which serve short menus of small dishes designed for nibbling with drinks. Chicken hearts are not (yet) readily available in supermarkets but Turkish grocery stores with butchers’ counters often sell them and very cheaply too. Alternatively, talk to your local butcher and ask him to order some for you. 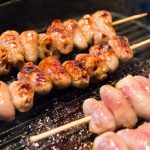 Please leave a comment - I love hearing from you!25 Comments to "Japanese-style Yakitori Chicken Hearts"