We received a review copy of this book.

NotLeafy are a food-fixated pair, vegetarian since the mid '80s – if they're not cooking or eating it they're reading, talking or writing about it.

Glancing at the cover of Indian Vegan & Vegetarian by Mridula Baljekari, with its colourful floral and vegetal design, you could be forgiven for thinking this is a gardening book – it even has the typical heft of one. On opening it we actually said “wow” at the abundant photos of brightly coloured dishes blazing out of white, glossy pages with panels of text in a crisp font. Some may not like this noughties magazine look but it is eyesight friendly for those kitchens without spotlight arrays. 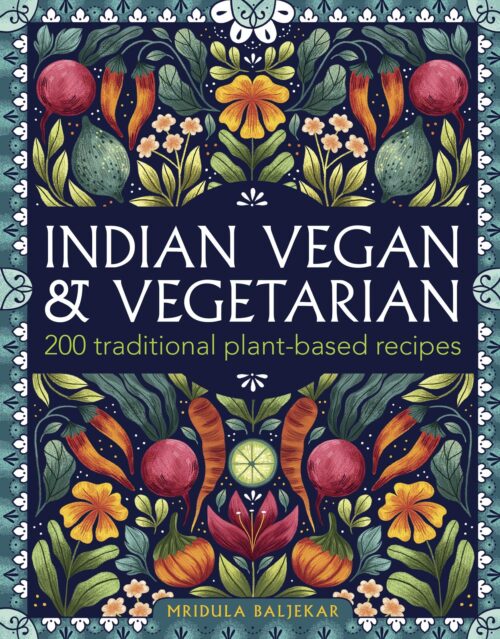 All recipes are on a single page so you won’t wind up trying to turn pages in a panic whilst wearing oven gloves. Vegan dishes are handily tagged with an icon at the bottom of the page.

Beyond initial impressions, what piqued our interest is that the recipes are sectioned into regions. Like most Brits, we started off our Indian food journey in Bangladeshi-run restaurants with their standard repertoire of vindaloos, kormas and tikka masala – and that was Indian food, right? As the UK’s culinary landscape evolved, and we acquired some region-specific cookbooks, we realised how scant our knowledge really was, so we relished this chance to get some regional perspective on Indian vegetarian food.

The introduction covers religious and foreign influences, how Indian cuisine is so thoroughly suitable for vegetarians and vegans, and how healthy it is – although the assertion that rice is believed to steady blood sugar levels raised our eyebrows somewhat (even if the British Dietetic Association say that basmati, long grain and brown rice are relatively lower glycaemic index foods). It also explains how to plan and deliver an Indian meal and how to use the book. Following on is a regional overview and sections covering various categories of ingredients, herbs and spices, accompaniments, utensils and techniques. There is also a useful section on vegan dairy replacements, even how to make your own coconut paneer and plant milk.

Regionality is something the author is experienced at presenting in previous books and each of the six regional sections is prefaced with a brief outline of the region’s states, history, geology, culture, staple crops and cuisine. If only Geography had been like this in school! The sections continue with recipes ranging from snacks, savoury and rice dishes, chutneys and breads, to desserts and drinks. All have short introductions, and some include handy cooking and substitution tips. Some of the recipe photo panels are perhaps gratuitous, serving no purpose other than eye-candy, but others are useful snapshots of preparation stages and might warn of impending doom if yours doesn’t look remotely like that.

The author, Mridula Baljekar’s bio is impressive: 27 cookbooks, countless accolades, TV and radio appearances, consultancies, catering for the great and good (including a Downing Street garden party before they became work events), a Great Taste Gold award winning chutney, a cookery school and YouTube channel. With her food described as ‘traditional Indian cuisine with a brilliant modern twist’, the only thing holding us back from getting stuck-in was how to choose the dishes from a shortlist ofpretty much every single one!

We decided to cook them all for one meal and, to avoid errors when making swift additions during cooking, prep everything in tubs religiously (as if for a stir-fry). We also found it helpful to premeasure spices and line them up in order of use for each recipe. 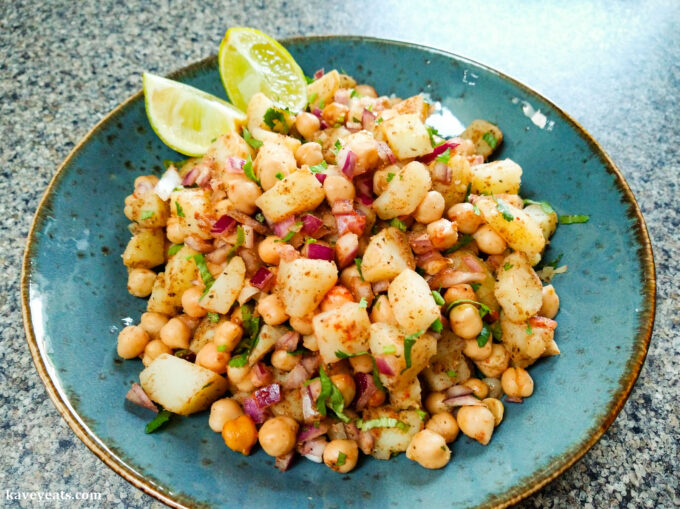 First up was the chickpea dish, Potatoes & Chickpeas in Lime Dressing/Alu Kabli. Apart from potato boiling, it’s uncooked and served at room temperature, so we made it in advance. A bonus was that this allowed the spices to meld . We used tinned chickpeas but were confused that the recipe specifies a 400g tin or an equal weight of dried. Draining a 400g tin yields 240g, while 400g of dried chickpeas is likely to double its weight to 800g after soaking and cooking – the latter step not being mentioned in the recipe. Long experience of Austrian potato salad tedium had us cooking the spuds before peeling them but, next time, we will leave the skins firmly on for added nutrition.

Easy to make, the finished dish looked darker than the book’s photo, possibly due to our opting for Kashmiri chilli powder; the recipe doesn’t call for a particular type so we went for our vibrant favourite. We would’ve eaten the lot chaat-like had we not had the rest of the menu to come but that was to our advantage, the flavours of the remainder developed in the fridge, tasting even better the following day. 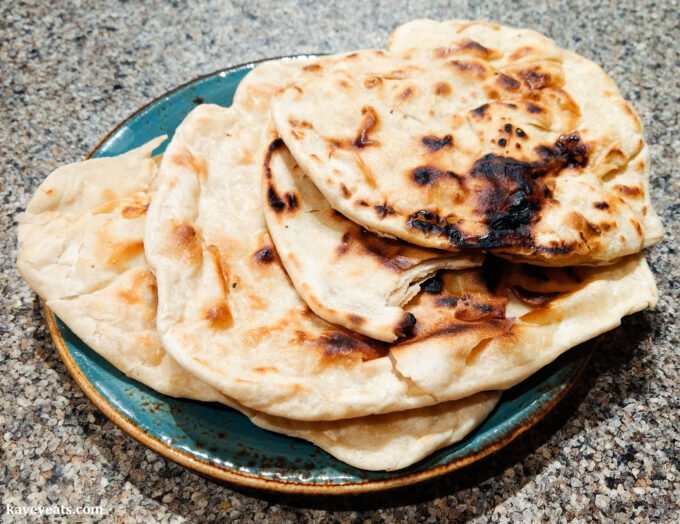 The Griddle-cooked Flaky Bread/Dhakai Parota was prepared next to allow the dough its required rest time before being divided into balls. The recipe’s description reminded us a little of making rough puff pastry but we could have done with more pictures dedicated to the technique of making a circle, making a cut, making a cone, rolling and repeating. Having then heated the griddle, we ran into our first glitch. The recipe’s “as above” wording made it hard to tell how many times each disc of dough should be turned and cooked, with or without fat brushed on. The breads smelled enticing as they browned, though use of vegan butter, rather than ghee, perhaps contributed to a less evenly fried appearance than in the book’s photo. The end result was suitably flaky and desirable, so Mr. NotLeafy must have been doing something right. 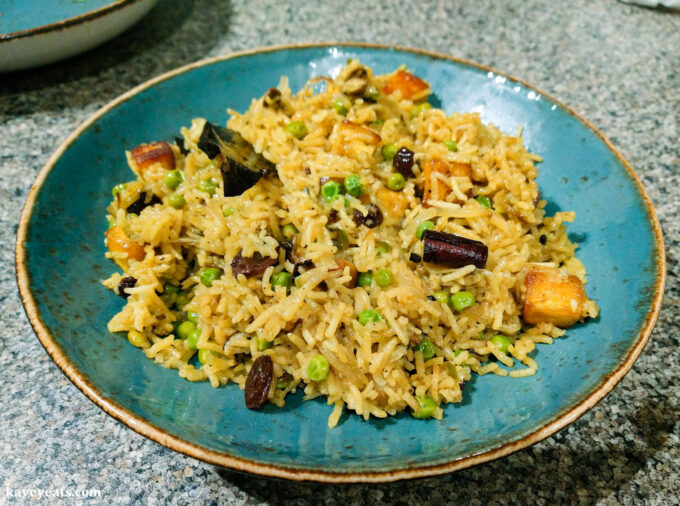 The last thing to be done in advance was washing the rice. We’re fully onboard with Tim Anderson, who never bothers washing rice. It never seems to achieve anything and is an enormous faff that can lead to wasted grains, however, our golden rule with any recipe is always follow it to the letter on the first attempt and tweak thereafter. FYI, we won’t be washing the rice next time.

When the time came to cook the meal, the rice dish Indian Cheese Pilau/Sanar Pulao was started first. Despite not looking forward to frying the paneer, anxiety from previous experience of it spittingand sticking irrevocably to pans and utensils, proved to be unfounded. We don’t know whether that was down to the vegan butter or small wok used but it was a blessed relief to extract golden cubes from the pan without needing power tools. Spice tempering, frying and assembly was all straightforward and, while the rice was left absorbing the liquid, the cauliflower dish could be cooked and the breads warmed – even Mr. NotLeafy can manage that much multitasking! When the time came to uncover the rice, we nevertheless found a little too much liquid remaining and a few more minutes cooking time needed. Like the photo in the book, ours was taken before garnishing with flaked almonds. 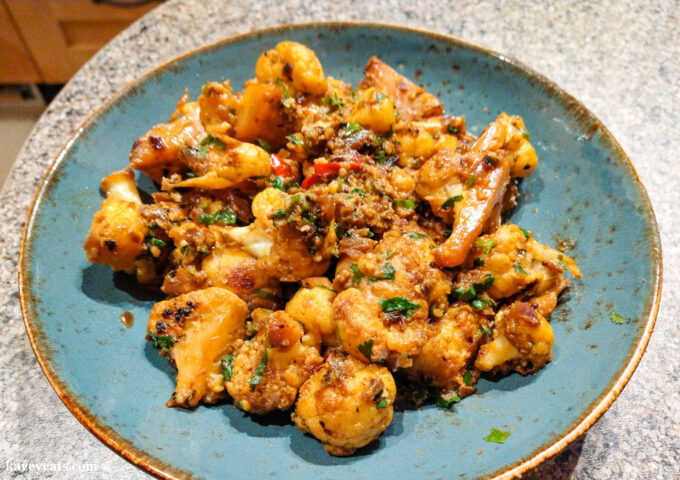 When choosing from the book, Chilli and Coriander Cauliflower with Eggs stood out due to its colourful photo and the appeal of herb-laced beaten eggs giving stir-fried veg a softly scrambled coat. Quantities are for four, so we halved everything which may have affected the dish’s balance but the main issue was not having enough fat to transfer heat from the pan to the florets during frying. Rather than leave the florets hard, or take more time and risk overcooking the rice, we resorted to the technique of splashing in tiny amounts of water. This steamed off immediately but softened and moistened the cauliflower enough to kick off the Maillard reaction. Cooking then continued in the recipe’s next stage, heat reduced and pan covered.

The dishes went well together, each being suitably distinct, and the portions were definitely generous (which also means a delighted Mr. NotLeafy got to finish what Mme . couldn’t). With its inviting freshness, the chickpea dish complemented the richer ones and worked just as well as a standalone lunch. It was hard not to just devour the pilau, although a little fatty for our personal taste. Every mouthful was spiked with fragrance and savoury cheese balanced with pops of sweetness from the sultanas. It’s a dish with a similar allure to a shovelable fried rice and a given that we’ll make it again, adjusting the fat down. Although the cauliflower dish was pleasantly al dente and well flavoured, the scrambled egg coated the florets much more thinly than expected and the yellow nuggets shown in the book’s photo were difficult to detect. We’d weighed our eggs for compatibility with the size called for but perhaps larger ones would’ve been better.

The bread provided a toasty foil for the rest and was perfect for scooping. Both spicing and the level of chilli heat in each dish were just right for us but the 1.5 teaspoons of added salt overall accounts for three quarters of a person’s daily advised intake, a bit too much for our tastes. Mridula emphasises the importance of using the correct amount of salt to achieve blending of flavours, but she also notes it might seem excessive to some and can be adjusted to preference. We’ll certainly do that next time we use the book.

Checking the index reveals it has some shortcomings, perhaps because some recipes have been garnered from previous books there’s a lack of consistency. You won’t find the paneer pilau under paneer and when you look under pilau you realise that it’s called Indian Cheese Pilau. The index has sub-sections but these are indented only one character from the main heading and the font is the same throughout, so it’s easy to lose track of which letter of the alphabet you are looking at. We’re glad we used those sticky tags to mark the recipes we fancied cooking – albeit the sheer number made it a bit pricey.

This book has 200 recipes suitable for vegetarians and vegans and its seductive visual appeal just makes you want to start cooking them straight away. Most recipes are accessible, as are the ingredients and, while there are some technical shortcomings, our experience is that they are more than outweighed by the breadth and depth of the book’s scope and the enthusiasm it generates to cook modern Indian regional dishes. Just writing this review we have a shortlist of a dozen that we intend to tackle at the first opportunity. This book’s a welcome addition to our shelves, plus it’s made us hungry to learn more.

We are delighted to share these three recipes from the book, with permission from publisher Lorenz Books. Coming soon, one per day from tomorrow!

You may also enjoy these Indian recipes.

Please leave a comment - I love hearing from you!3 Comments to "Indian Vegan & Vegetarian: 200 traditional plant-based recipes by Mridula Baljekar"