This post contains Amazon and SousChef affiliate links; we earn commission from qualifying purchases. Kavey Eats received a review copy of this book.

We’re brought up in the Western world with very definitive views on what comprises “comfort” and “easy” in food terms. A slice of bread slathered in butter, a biscuit with a cuppa, a slice of cake, a takeaway pizza loaded with anchovies and pineapple (yeah, sorry not sorry), a hot, crisp sugared doughnut from the van at the seaside, maybe a pork pie ploughman’s for lunch or a hot bucket of KFC devoured in the car, cleaning your fingers on the lemon sachet wipe before going into the cinema.

When you’re hit by a diagnosis of gluten intolerance, coeliac disease (an autoimmune condition in which the gut attacks itself if it senses a minute level of gluten), gluten ataxia or Hashimotos (where your immune system attacks the thyroid), the pantheon of easy comfort foods suddenly shrinks dramatically. It feels as if your world shrinks: the fear of eating out, of eating with friends, of inadvertently ingesting “normal” food that triggers a reaction becomes all-consuming (if you’ll excuse the pun). You very quickly have a bucket list of a hundred totally normal things you want to eat and can’t. And, as anyone who picked up a gluten free (GF) option by mistake (or deliberately, I’m not judging you) in the panic-buying spree of 2020 will tell you, GF stuff doesn’t have the taste or texture of non-GF (“muggle”) foods. 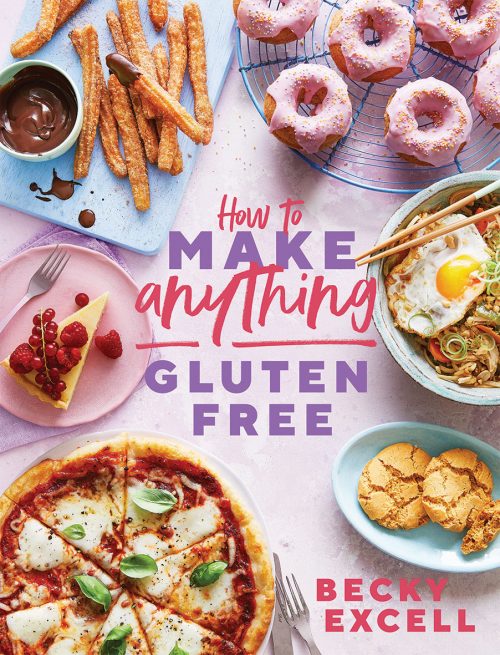 Becky Excell, the author of How to Make Anything Gluten Free (HTMAGF), is subject to a variety of intolerances, of which gluten is one. She’s become the deserved darling of the gluten-free world through her go-to blog: her openness about her struggles with her diet (it’s often viewed as a stigma – or at best “being fussy”), her generous, self-effacing nature and her determination to recreate the dishes she’s been missing make her a popular and sympathetic figure.

This book gives Becky the opportunity to do a number of things, which she embraces with relish: she creates everyday GF recipes that are usually packed with gluten using readily available, mainly reasonably-priced GF ingredients (more on this later); she avoids long, complex processes, aiming for the “average cook” audience; she expands and improves upon recipes previously published on her blog. She also puts her arms around the wider “intolerance community”, providing at-a-glance swaps in almost all recipes for veggies, vegans, lactose intolerants (her boyfriend and chief taster is in this camp), dairy-free and low FODMAP folks. The announcement that she was publishing a book was met with a huge, positive response from among her 300k+ social media followers and HTMAGF is now a Sunday Times bestseller.

So, as a keen home cook and the wife of a coeliac diagnosed seven years ago, what did I make of it?

It’s undeniably pretty. Its pages are pastel, its images are predominantly in pastels and spring-like colours. It feels like a light, bright, inviting book. It’s also very neatly targeted at the families and friends of GF people as much as it is the GF person themselves. It doesn’t assume you know what the base ingredients are or how to manage the kitchen when preparing GF food – there’s a quick and digestible crash course right up front on preparation as well as store-cupboard and other handy ingredients. And like any self-respecting book with lots of baking recipes, there’s a useful equipment section.

Photos are modern, cute and very inviting. They aren’t as regular as I would have liked but Becky publishes more photos on her social media using the hashtag #HTMAGF and has a YouTube channel demoing many of her recipes. In fact, it’s already a chunky cookbook; I imagine with photos for each recipe it would have been unwieldy. There are a few lovely cheery photos of Becky obviously enjoying her food, which made me smile.

This isn’t a book for those looking for naturally GF recipes: as Becky says, there are plenty of those out there. Instead, she’s tackled a lot of the real heart-wrenchers for those avoiding gluten – the foods that cause a slowing of the footsteps when passing a bakery shopfront, or a pang of nostalgic memory when the local takeaway leaflet drops through the letterbox. Her chapter titles cover all the bases: Essentials (pasta! and different types of pastry); Bread (yes, including naan); Breakfast and Brunch (e.g. crêpes and waffles); Starters, Sides and Snacks (scotch eggs make an appearance); Fakeaways (quick Kung Pao chicken); Home Comforts (pies, beef stew with dumplings); Baking (so many cakes …) and Desserts (churros!).

Each recipe has volumes, time guides (usually but not always including chilling and resting time, so it’s worth reading ahead just in case), neatly divided ingredients lists with both European and US measurements, a brief description and tips for making. Many also have freezing info (great when the recipe makes a large amount). 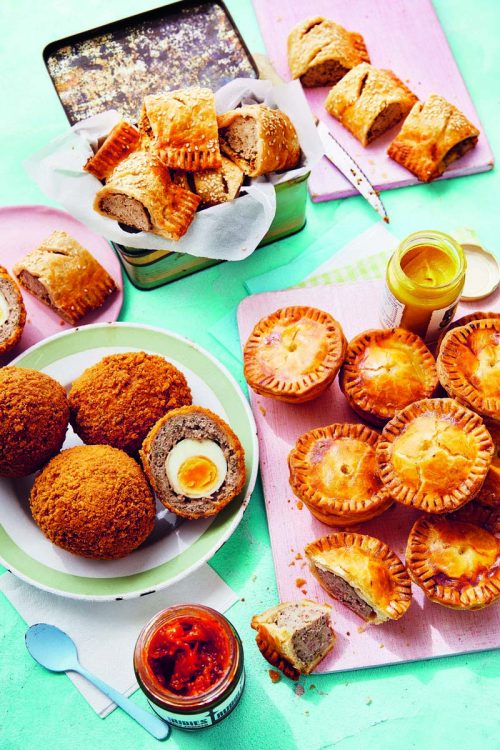 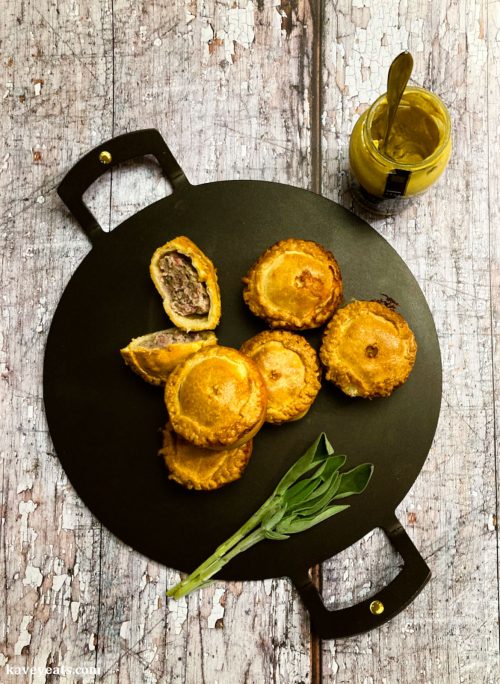 Hot Water Crust Pastry was astonishingly simple. I pulled it together in minutes and had it in the fridge to chill almost effortlessly. I used it to make the Proper Pork Pies recipe – rich, umami mini pork pies that had a thick, slightly flaky crust without any toughness and a nicely crisp base. Personally next time I’d fill them a little fuller or experiment with some jelly stock poured through the hole after baking. 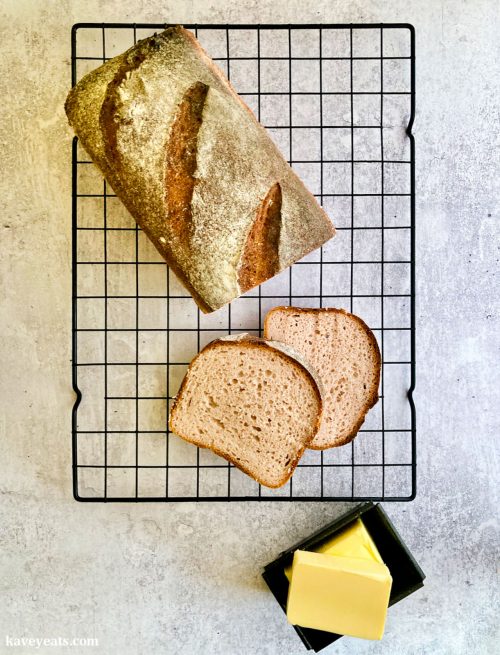 The Crusty White Sandwich Loaf was also straightforward and had an excellent crusty exterior and a decent springy interior. It was substantially less dry than most commercial loaves sold by supermarkets. Becky uses xanthan gum in this recipe which has a tendency to irritate sensitive bellies and in this case gave a slightly gluey texture which I’m noticing as characteristic of the ingredient. I think I’d experiment with less gum and a longer bake to see if I could even out that texture. That said, it toasted beautifully and made excellent eggy bread (French toast if you’re posh). 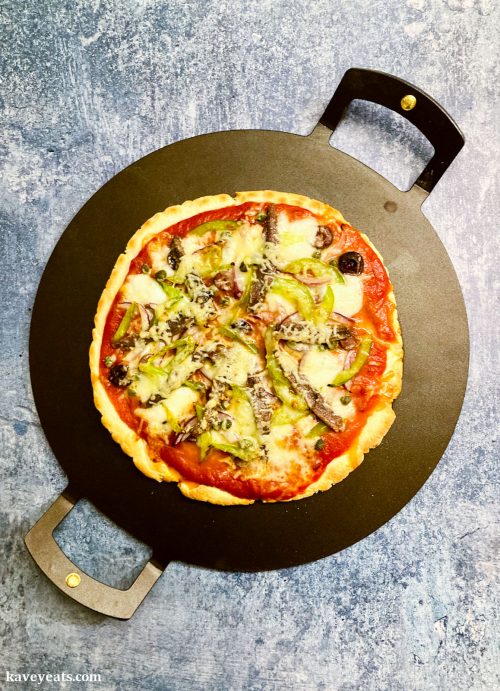 I used the 3-Ingredient Pizza Dough recipe to make (… drumroll …) pizza (thin and crispy in my case, though there is a recipe for deep pan). Another straightforward dough, which despite using Greek yoghurt has none of that characteristic sour taste when cooked. This used an interesting technique in which you pan-fry the bases briefly before topping and baking, ensuring a crisp pizza outer. The final product reminded me of exactly the slightly dense, doughy inner texture of the takeout pizzas you pick up from the supermarket “build your own” counter and was dramatically better than the tough ready-made bases in the Free From aisles. I think I’ll play about with the pan cooking to see how it impacts the dough structure when baked. 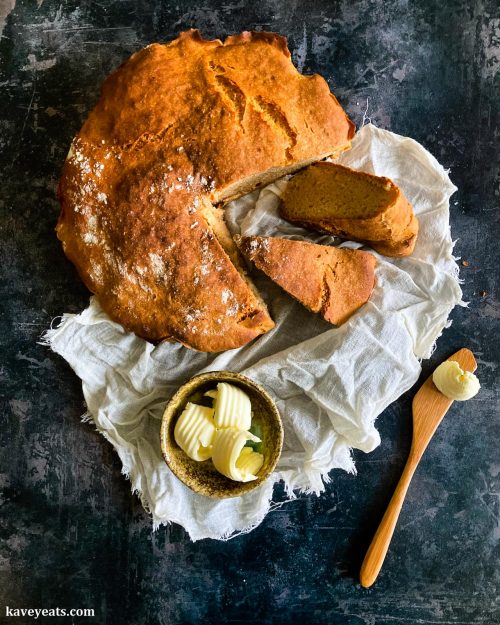 Next, 6-Ingredient Soda Bread. I’d tried a GF soda bread recipe many years previously that had gone straight in the bin, so actively unpleasant was it. But I really wanted a quick loaf – no waiting around for yeast, rising etc and so I took the plunge. I’m not sure what (if anything) I did wrong, but the batter was crazily wet and didn’t so much turn out of the proving basket as pour out! Nevertheless I persevered (except for scoring a cross in the top before baking, which seemed a fruitless task given the liquid dough) and the end result was really great – tasty with a bouncy, light texture that wasn’t overly gummy. It kept fresh (unusually for GF bread) and toasted evenly as well as making a decent eggy bread. It was particularly fine when only just cooled, eaten with a good daub of salted butter. 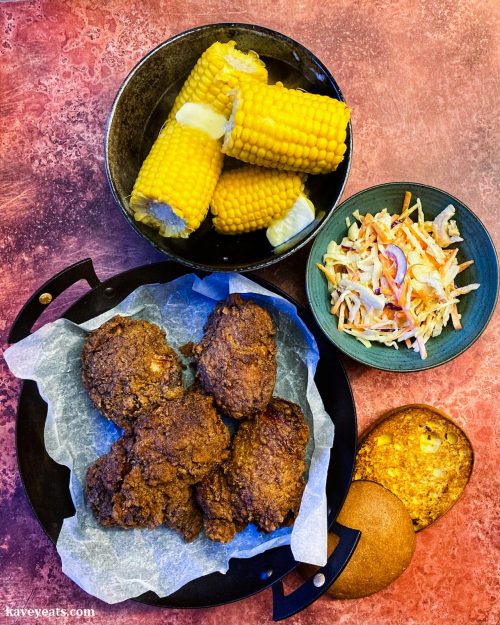 Finally in the savoury category, “KFC”. Pre-diagnosis, this was maybe a once-a-year indulgence and I know of literally nowhere offering GF fried chicken to take away so this felt like a real treat. Marinading the chicken in buttermilk made it exceptionally succulent and juicy, and the shatteringly crisp outer was very reminiscent of KFC spicing (maybe it needed a little more white pepper for me!). Accompanied by sides of homemade cheesy coleslaw and corn-on-the-cob (and lots of lemon wipes on hand), that sense of indulgence was well and truly fulfilled. 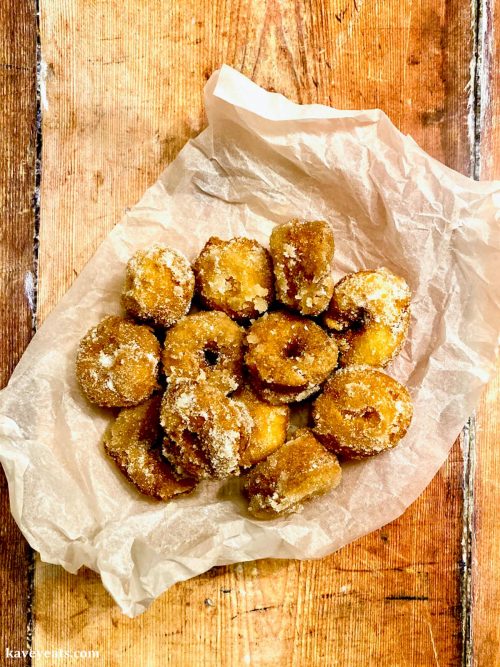 So on to the sweet stuff – Doughnuts, of course. I made fried ring doughnuts and followed those up with round doughnuts, just to see what the difference was. Becky recommends baking the ring doughnuts and she’s right – the frying makes them slightly too crisp and brittle. The round doughnuts on the other hand were crunchy on the outside, softly pillowy inside and barely distinguishable from those we used to eat from the van by the sea. As they cool they get a little more cakey in texture, a typical GF trait, but what the hell, just eat them hot! 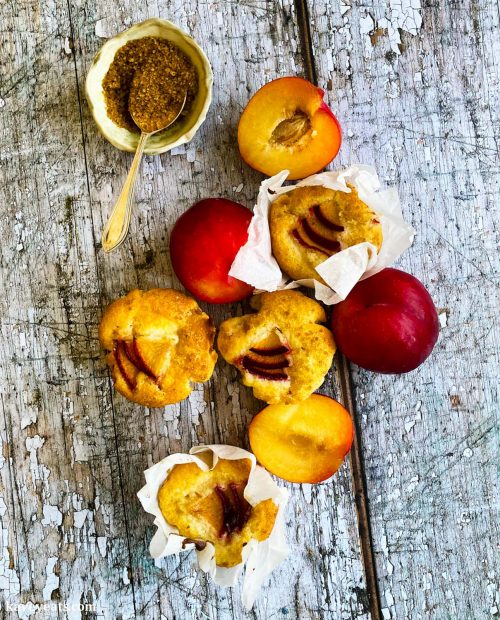 I also (in the absence of any blueberries but with a surfeit of plums) adapted Becky’s One-Bowl Blueberry Muffins recipe, chopping my plum flesh into blueberry sized pieces and topping with a few plum slices. A versatile recipe, the muffins, just warm out of the oven were tender, risen and light. Again, as anticipated the crumb became a little cakier as they cooled.

I’ve cooked a lot of GF recipes in the last seven years, often obsessively seeking out ways to make home cooked food as close to “normal” as possible. We have cupboards full of unusual flours often sourced online and at high cost. I’ve explored the science behind these flours with the help of blogs like The Loopy Whisk and Gluten Free On A Shoestring, and courses & books by Naomi Devlin. Those flours and the techniques for using and combining them often give exceptional results, regularly indistinguishable from the everyday alternative and avoiding the relatively nutrition-free starches and gums that make up a lot of gluten-alternatives. But the fact is, the ingredients need dedication to acquire, and the skills require dedication to learn. Anyone avoiding gluten who wants to make easy, familiar comfort food quickly and comparatively effortlessly using a standard bag of supermarket GF flour will find Becky’s book a blessing. Its sheer accessibility has thrust it into the bestseller category deservedly. We’ll be having a go at the kebabs and churros for a fun “fakeaway night in” soon.

Recipes from How to Make Anything Gluten Free

We have permission from Quadrille to share two recipes with you from the book:

Kavey Eats received a review copy of How to Make Anything Gluten Free by Becky Excell from publishers Quadrille. Book photography by Hannah Hughes. Home-cooked food photography by Nicky Bramley.

Please leave a comment - I love hearing from you!One Comment to "How to Make Anything Gluten Free by Becky Excell"