There is no greater compliment I can give to a restaurant serving North Indian food than that it reminds me of my mum’s home cooking. So it’s not an accolade I give lightly.

It is one I give to Delhi Grill having finally made my way to this new Chapel Market Indian restaurant in Angel Islington last month.

May it be the first visit of many. Many, many. 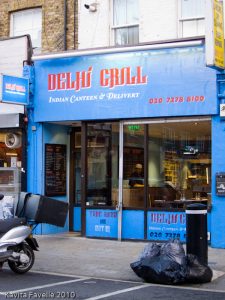 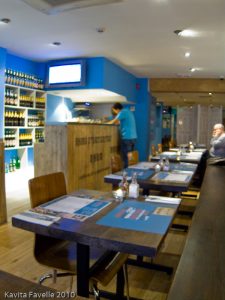 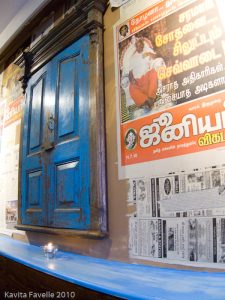 Based on a traditional Indian dhaba – a casual canteen or restaurant stop serving tasty, inexpensive local dishes to a really wide range of clientele, from truckers and rickshaw-wallahs to suits from nearby offices – Delhi Grill doesn’t follow the usual British curry house propensity for long, long menus. Instead it offers a short, balanced range of traditionally cooked dishes, many cooked long and slow after overnight marinating.

In addition, during lunch times and and on Sundays (when the Chapel Market Farmers Market is on) you can buy freshly made wraps and lassis from the Delhi Grill market stall set up in the street outside the restaurant.

(The stall has been winning over customers since May, the restaurant opened mid-September). 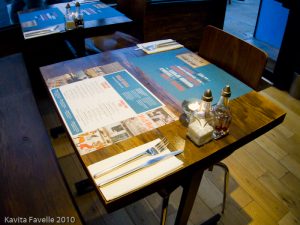 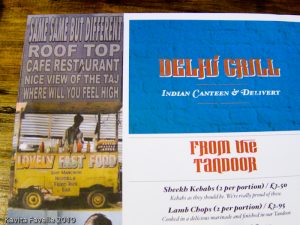 Delhi Grill is a proper family business. Brothers Aman and Preet Grewal wanted to create a down-to-earth restaurant serving the kind of food Indians cook and eat at home. Recipe development is lead by Preet’s wife, Satpal who has drawn heavily on family recipes from parents, aunts and cousins. The three together have spent many hours tweaking each recipe and continue to review dishes regularly.

Also vital to the team is Ashik, restaurant manager, who ensures that the stall and restaurant are running smoothly while Aman, Preet and Satpal look after the recipes and work behind the scenes. In the kitchen, chefs Ashraf and Shamshu make sure that the dishes sent out are exactly as they should be according to Satpi’s final recipes.

The menu is short and sweet (though with plenty enough to tempt) and we’re quickly ready to order. 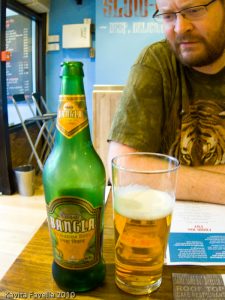 Pete drinks a large Bangla (£3.75) from the range of Indian beers, most available in small and larger bottles. A strong, simple lager designed to compliment Indian food, it does the job.

I can’t resist the lassi (£2). It’s lovely – light, frothy and a proper natural yoghurt flavour. It’s very much like what I whizz up at home and perfect with the food to come. 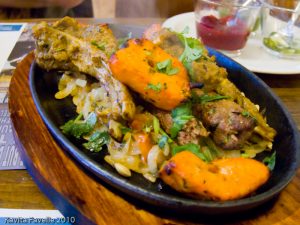 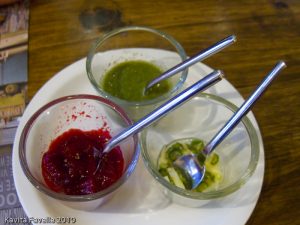 We start with the Delhi Grill (£6.50). Four chicken tikka pieces, two lamb chops and two sheekh kebabs piled over sizzling onions are served alongside three condiments: a coriander chutney, beetroot and garlic and one other.

The chicken tikka is the first surprise. Typically, this is a dish I feel so-so about. It’s chicken. It’s been marinated. It’s been grilled. It has no sauce and is often a bit dry. But this is quite a revelation, mostly because of how very juicy it is. Moist spicy chicken goodness; definitely one we both love.

The sheekh kebabs impress too because they taste just like my mum’s. And I love my mum’s home made kebabs! Gently spiced, a traditional texture (though I also have a soft spot for the very finely minced Dishoom version) and as moist as the chicken tikka, these are really rather good and disappear far too quickly. I could eat a lot of these.

The lamb chops are good but don’t wow me as much as the other two grill dishes. They have been slow cooked, cooled and then marinated before being grilled so there’s no juicy pink inside, though they are reasonably tender. But the main issue for me is my addiction to chargrilled lamb chop fat and these chops don’t give me any! Perfectly nice but their plate mates win the day.

Oh and I mustn’t fail to mention the onions. I think of these as mere garnish but the onions on the platter are so tasty we eat every last piece. 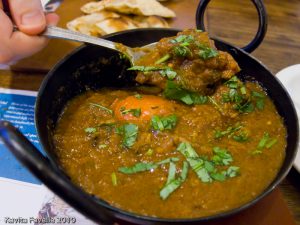 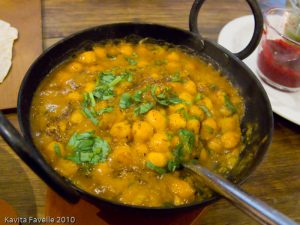 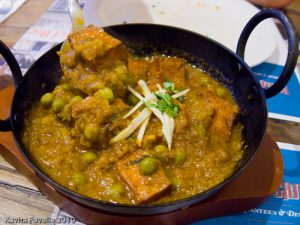 The rogan gosht (lamb curry) consists of tender, juicy pieces of lamb (no cheap, gristly cuts in sight) in a rich, deftly spiced tomato sauce. The traditional recipe and slow cooking really shine through. I really like this.

The cholay (chickpea curry) is another dish that is just like mum’s. Unlike many Indian restaurants, the spicing is completely different from the lamb curry. The chick peas are cooked as I like them; the balance between soft and firm is just right. For me this and a pile of freshly cooked rotis is the next best thing to going home to mum.

Yet again, the matter paneer (cheesy peas, as I’ve heard it called) has it’s own blend of spices and is distinct from the other two dishes. This time the recipe is quite different from mum’s, though it’s clearly still a Northern Indian family recipe. I love the firm cubes of fried paneer and slippery peas. This one is Pete’s favourite. 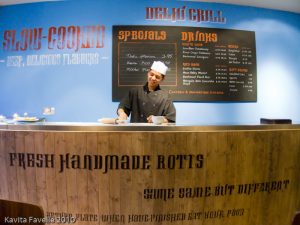 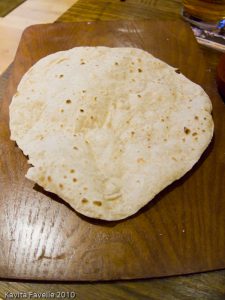 roti being made; roti

One thing I really appreciate is the freshly cooked rotis. During our meal we watch roti-wallah, Gautam, roll and cook them for us and other tables. When the restaurant is packed, I’m told that the main kitchen also gets roti-making to meet demand. For me, they could do with a little more browning but taste, texture and thickness is spot on. 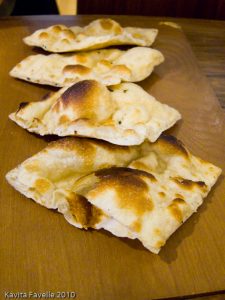 The naan isn’t bad either though my personal taste is for it to be a touch thicker. It’s decent but I’m won over by the rotis, delivered piping hot as they’re made. 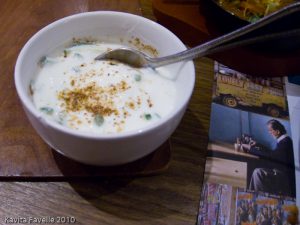 Raita is a simple dish – natural yoghurt, cucumber and a light sprinkling of spices. It goes well with the rest of our order and balances the chilli heat of the dishes.

After all that, we are far too full for pudding; in fact we take away leftovers for the next day as we can’t even finish what we’ve ordered!

Our bill is just under £30 before service (though the rotis were being offered to guests to try during our visit so the four we had would normally add another £4 to the bill). I think this is a great deal in London and just wish Delhi Grill were my local Indian restaurant!

After our meal we take the opportunity to chat to owner Aman. You can watch my impromptu interview here. I didn’t plan to do an interview, so I didn’t prepare any questions – these are a little spur-of-the-moment. Not too incoherent, I hope!

Please leave a comment - I love hearing from you!20 Comments to "Home-Style Cooking at Delhi Grill"